Responding to the Swastika 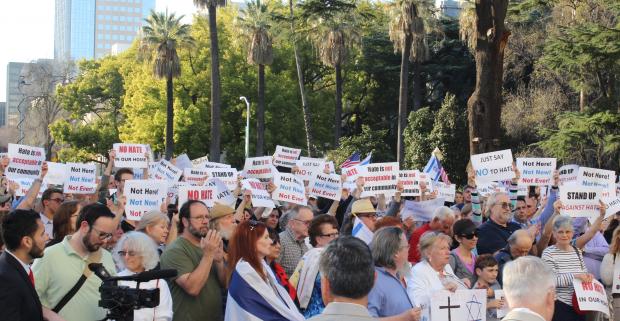 Hundreds gathered in Sacramento on the steps of the California state capitol for a rally against anti-Semitism, March 9, 2015.(Michael Alcalay) Credit: JTA, Michael Alcalay

The Importance of Swift Responses to Anti-Semitism

By Becki Cohn-Vargas
Not In Our School Director

As a child of Holocaust survivors, I grew up hearing about my parents’ struggle to stay alive. Both my parents were born in Germany. Separately, as teens they each barely escaped with their families after Kristallnacht, my father as a refugee to Shanghai and my mother to England.

Even as I go to Temple on the Jewish High Holidays each year, with a police officer or security guard outside protecting us while we pray, I had not been frightened that anti-Semitism would rise to those horrific proportions again. Only once in my life was I called a “dirty Jew.” Yet, recently, as we heard about Jews being targeted and murdered in both France and Denmark, a fear rose inside me. After all, it is only 70 years after Auschwitz, and I still have living relatives who have been in concentration camps.

And then, less than 100 miles from my home, a Swastika was spray-painted in red on a Jewish fraternity at the University of California at Davis. Nathaniel Bernhard, vice president of Alpha Epsilon Pi fraternity, told the Sacramento Bee, “Jewish people still can’t feel safe on their own campuses and in their own houses...Anti-Semitism still exists today. It’s not a fairy tale.” Recently, the National Demographic Survey of American Jewish College Students, produced by Trinity College and the Louis D. Brandeis Center for Human Rights Under Law, found that more than half of Jewish students at American colleges had witnessed or experienced anti-Semitism within the previous academic year.

Although I cannot help but feel that visceral fear, I believe in my heart that most people do want to get along. A Quaker family in England took my mother's family in when they managed to escape from from Germany.

As an educator, I have devoted my life to ending hatred and bigotry. That is what drew me to work at Not in Our Town (NIOT). I try to pay attention to both the small and large acts of anti-Semitism and hate against people of all backgrounds and identities. I try to have a laser sharp focus on naming and responding to acts of hate against any individual or group.

Whether it is graffiti with swastikas or teens who desecrated a Jewish cemetery in France, like canaries in the gold mine, youth are reflecting some of the hate we have allowed to fester in our society. But, I also see signs of hope in the powerful responses:

I am heartened by these responses, and they remind me why our work at Not In Our Town and Not In Our School  is so important. I look forward to continuing to join with others across the country to speak up about small and large intolerant acts toward any group that is targeted by hate.

In:
Not In Our Town
Not In Our Scool
holocaust
antisemitism
hate crime
UC Davis
Jewish Fraternity

Leading in a Diverse Community

The guide will be used to support candidates in a doctoral class entitled Leading in a Diverse Setting. This service-learning aspect requires candidates to self select a topic to present at a school (students/parents/PTA), church, neighborhood association, sorority/fraternity.

Your posts are simply wonderful. Please keep writing.Thank you.

Keep up your great work!