Lancaster, CA: A City Unites to End School Bullying | Not in Our Town
Skip to main content

On the edge of the Mojave Desert in California, educators, political leaders, and students face the dangers of bullying after teen suicides devastate two nearby towns. A local middle school counselor initiates an anti-bullying program throughout the district and students take the lead in standing up to hate in their community. This story is part of the Not In Our Town program, Class Actions, that premieres nationwide on PBS stations in February 2012.

What began as one educator’s effort to create a safer environment for her middle school campus blossomed into a citywide movement.

“We had two suicides that happened within 50 miles of our school and our town,” Del Sur School counselor Lauri Massasri says in Class Actions. “When something like this happens so close to your own community it's a wake-up call and you realize that this could happen to any one of us and we've got to do something a little bit more because apparently what we were doing isn’t working isn’t enough.”

Massari, a longtime educator, had been thinking of ways to begin an anti-bullying program in her school. Over the summer two years ago, she flipped through channels in a Palo Alto, Calif. hotel room while her son was at Stanford baseball camp. She happened to catch coverage of Palo Alto Unified School District’s Not In Our Schools program on public television. Each year, the district hosts Not In Our School Palo Alto, a month-long event where the school community engages in activities and discussions about addressing hate, bullying and harassment.

But for Massari, Palo Alto offered a model. When school started, she launched a Not In Our School campaign with students in her True Leaders program, which focuses on peer instruction. 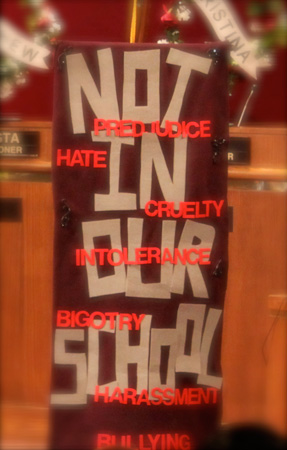 The strength of the anti-bullying program, Massari says, lies in student involvement, “Kids create change on campus, not adults. They have the power to create the culture that’s important to them.”  Massari also encourages students to focus on the positive aspects of “peer power” versus “peer pressure.”

The program began with students leading anti-bullying lessons in middle school classrooms. They also developed the musical dramatization, “Darkness to Light: A Community United Against Bullying,” which highlights the devastating consequences of bullying and calls on all students to play a role in creating safe and inclusive schools.

By the time Not In Our Town caught up with Massari in November of 2010, the Not In Our School program had created ripples that touched the entire city. At an Oct. 26, 2010 city council meeting, public officials dedicated the week of Nov. 15-19 to the Not in Our Town Citywide Anti-Bullying program.

During the first days of the week, 200 student ambassadors from the four primary and secondary Lancaster school districts conducted anti-bullying activities at their 20 home campuses, comprising 50,000 students.

At the beginning of the school year, 62 percent of Del Sur School students reported feeling safe on campus, according to the school’s Support Personnel Accountability Report Card. By the end of the year that figure jumped 30 percent to 92 percent. Rossall attributes this to the “change of culture relative to bullying.” 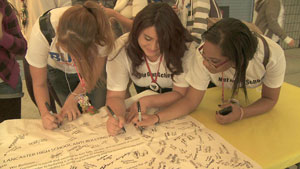 Prior to the program’s implementation, Rossall said many students overlooked how critical bystanders are in perpetuating bullying. The program helped students understand they were condoning bullying by not responding and how they could be part of the solution.

The program, Massari admits, is not without its naysayers, who include those who question the boldness of addressing suicide. But for Lancaster, bullying is not something citizens can ignore. In 2008, 15-year-old Jeremiah Lassiter shot himself in a school bathroom in Acton, Calif., and in September 2010, 13-year-old Seth Walsh’s hanging attempt turned fatal after nine days on life support in Tehachapi, Calif., according to news reports. Both towns are within 50 miles of Lancaster.
Though not the impetus for the program, Massari says these tragedies resonated in the community. “We’re shocked because it’s just so close to us,” she says.

Rossall encouraged Massari to push the program forward, believing the student-centered student-ambassador program focused on anti-bullying could be replicated and interpreted by other schools.

Likening it to the program’s fortuitous beginning when she caught the Palo Alto program on television, Massari says, “Every bit of this program has happened this way. The right people have been there at the right time. Wherever I go, there seems to be all these people who support these programs.”

For more information on True Leaders, a Not In Our Schools group, visit their group page here.

Listen to Lauri Massari talk about how she started Not In Our School in this Class Actions video web extra.

In:
California
not in our school
Bullying
Lancaster
anti-bullying
class actions
antelope valley

My son is only 6 and in the first grade. He does very well in school usually, but recently his grades have dropped, and he's not himself. In a bad mood when he comes home, and dreads going to school. We're talking about a cute little guy who really, really liked school! Everytime I try to talk to him about what's going on...he doesnt want to talk about it! As any mother knows, that can truly break your heart!  Turns out his older brother gets suspended the next day for fighting a kid who has been "punking" my smaller son for weeks!!! I spoke to the kids and the principal and he was suspended anyway. Since then, I am actibe in the boys classrooms, and I keep an eye on them myself....I amseriously thinking about home schooling my kids....

Moved for a better tomarrow...

Well, since my submission in February, My husband and I decided to move our children back home. A small country town in northern California where I grew up. Since the move, my boys and my daughter who is in kindergarten this year are really happy and love school again. I believe since their classrooms went from 30 something kids to having 15 in a class, they have more supervision and more one on one contact with the teacher. Their grades have not only improved, but they both went up a grade! I am so happy that my children will grow up with the morals and upbringing that I did. Also, that they are able to focus on the sum of 8x2 rather than worry if they're going to be beat up on the bus and at school. I thank the lord that we were able to make this life change for our family...Thank you for listening. Let's put an end to bullying one way or another...

Not that it's any of our business, but the other child get suspended also.  For fighting or punking your son.   I know thats not the point but, I don;t even know why I ask.

I hope your son is doing better in school since you take part in the class room.  I reay the Principal has a more open mind to the punking going on in his school.