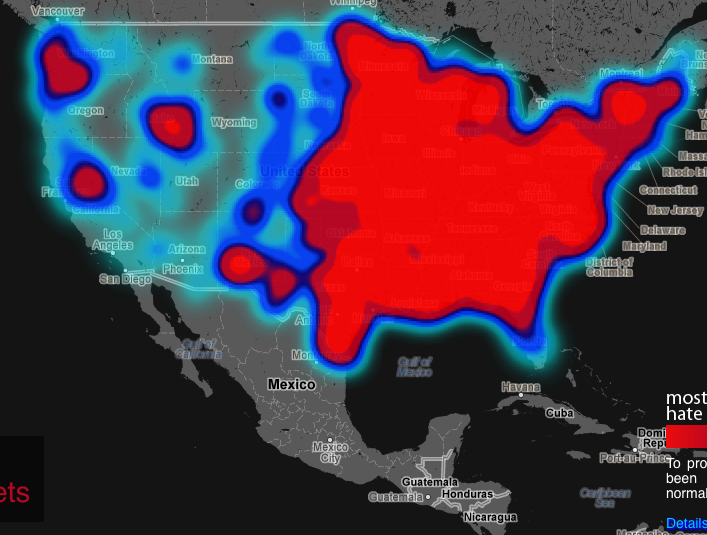 Data visualization company Floating Sheep has produced a fascinating map of the mainland U.S. which charts the use of hate speech on twitter. The so-called “hate map” shows the frequency of geotagged tweets containing certain certain racist, homophobic and ableist terms, the end result being an interactive map highlighting hate hot spots across the country.

The number of hateful tweets is calculated as a proportion of the total number of tweets per county, so that areas with more Twitter users are not placed at a disadvantage. Researchers also read each tweet, to ensure that tweets that used these terms positively were not counted as hateful in the statistics.
Before heading to the hate map to see how your state has fared, be aware that the map uses a number of racist, homophobic and ableist words that readers may find upsetting.
LGBT community rallies after three anti-gay hate attacks in New York City
CREDIT: DNAinfo.com

LGBT advocacy groups in New York City have hosted a large anti-hate rally, following three incidents of anti-gay violence this month. Five people—two couples and one individual—have been assaulted in recent weeks by men who also shouted anti-gay slurs, according to The Advocate.

Community members and elected officials have been vocal in their support for the victims. City Council Speaker Christine Quinn appeared at a press conference alongside the second pair of victims and said, “There was a time when our city was plagued with hate crimes. We are never going back to that place. That is not what New York is about.”
The rally was organized by the New York Anti-Violence Project and Queers Rising. It took place on Thursday May 16 at 7pm, near Madison Square Gardens, where the first pair of men was attacked. Check out the rally’s Facebook event page for more information. 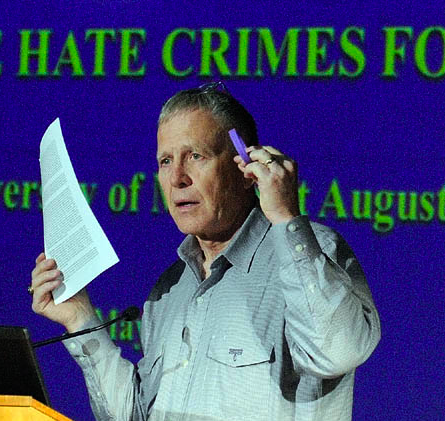 University of Wyoming student Matthew Shephard’s brutal murder in 1998 led to the extension of hate crime laws to protect LGBT people, as well as transgender people and people with disabilities. A May 16 conference on hate crimes at the University of Maine featured Shephard’s parents Dennis and Judy Shephard as keynote speakers, according to Morning Sentinel.

“The truth is, members of the gay community and their families want nothing more than to be treated like every other American,” said Judy Shephard in her address. “Be happy and free; safe and secure; love and be loved in return.”
UCI grapples with hate incidents
This week, an African-American student at UC Irvine found a note in her backpack saying “Go back 2 Africa, slave”, according to the LA Times. Campus police have called this a “hate incident.”
UCI’s Black Student’s Union said in a statement that African-American students, who make up 2.6 percent of UCI’s student body, have faced racist treatment from fellow students long before a racist video by a UCI fraternity made national headlines in April.
In a statement given on Tuesday, UCI Chancellor Michael Drake pledged to find the person responsible for the note and sanction them.
In:
rally
California
hate crime
anti-gay
racism
New York
Maine
anti-hate
matthew shephard
uc irvine