By Margaret MacDonald
Editor’s Note: In the early 1990s, white supremacists groups were growing bolder in their activities in Billings, MT. Hate literature began appearing around town and then members of the Native American and Jewish communities became the targets of a rash of hate crimes. Rather than resigning themselves to the growing climate of hate, a group of community members decided to organize and send a different message to their neighbors. Margaret MacDonald, a leader in the original Not In Our Town Movement in Billings, Montana, reflects on some of the guiding principles that helped shape the community’s creative and powerful responses, later captured by The Working Group in the documentary “Not In Our Town.”
The first principle was that we decided hate speech – graffiti, vandalism and flyers around town – should not be ignored simply because it came from “kids.” Of course, we did not know exactly where it came from, but many community leaders presumed it was, and also thought the best course would be to pretend it wasn’t happening. Fortunately, we had three things going in our favor – (1) a sophisticated statewide human rights organization that was on the cutting edge of countering this burgeoning movement, (2) strong faith community leaders who were willing to step up and play a leadership role in the community and articulate thoughtful, strong arguments for addressing these ideas proactively, and (3) a police chief who watched a similar situation unfold in his previous posting and learned the hard way that when communities tried to ignore this movement, they paid a price in escalating violence and ultimately tragedy. 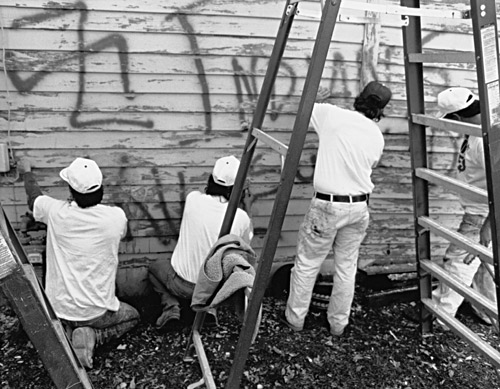 The second principle we realized was that the targeted communities of hate groups were going to be watching very closely to see how the rest of the town was responding. If the town is saying, “It’s not a big deal, it’s just kids acting out, don’t pay attention to them, that’s all they are seeking,” the message to the families who are being bullied and intimidated is that, “Your safety is unimportant.”  If the town, on the other hand, says that what happens to the smallest minority, happens to us all; and we will not stand by and permit that to continue, the whole community is strengthened and relationships are built up.  All kinds of wonderful and surprising fruits will come from stepping up to this issue.
The third principle we worked by was to focus the energy of the community not so much on the perpetrators, but rather on their targets and find significant ways to publicly stand with them. So at every step of harassment and intimidation, more support is manifest for those who are being targeted.  That is not to say that if the perpetrators can be identified and brought to justice, they certainly should be.  But the creative nonviolent “jujitsu” of making every action elicit even stronger support for the targets of hate undermines the impetus and the energy of the hate groups and their insidious message.  It also creates inestimably valuable teaching moments in thousands of homes, classrooms, work places, churches, and other venues across the community.
NIOT:
Billings
montana
hate crime response
graffiti
vandalism
harassment
support
Local Lessons:
When Hate Comes to Your Town

Thanks to Margaret and the human rights community in Billings, a refocusing- away from reacting to the perpetrator - to comforting and standing by the targeted community has become textbook hate crime response. If only the mainstream media would catch on...

I think that you named some to the most important features of the Billings story - the factors that lead to such a powerful response there, and the things that we should all keep in mind each time we encounter manifestations of hate and intolerance.  Thanks for the lessons, Margaret.

importance of where to meet

It took us a little while to understand that for most the places around town where people could gather, there

is at least one group that is not comfortable there.  We have realized that probably the only place in

Princeton where all, or virtually all, people are comfortable is the Princeton Public Library.

When you want people to come, you have to choose a place where they will feel comfortable.

This is especially true if the topic of the gathering is uncomfortable, which racism and white privilege

Check out Color of Change (.org site) This group has had considerable success in persuading advertisers to drop Glenn Beck.

I am a member of Color of Change

We are wanting to connect with other peaceful protectors to block out the noise from the WBC's visit to local schools on Monday, April 19th. Please get in contact at abiggerpeace@yahoo.com  <3

I very much appreciate the three guiding principles -- and believe they could be used as guidelines for anti-bullying programs in elementary schools, middle schools, and high schools. Imagine teaching children from the earliest moments of their schooling that mean-spirited behaviors would never be ignored; that everyone's role is to respond to meanness or cruelty in a way that doesn't replicate it but does stop it; and that everyone's feelings and abilities to participate matter. What teaching strategies would allow teachers to model these guidelines as a normal part of every class? See www.facinghistory.org and look for "teaching strategies" under "educator resources." Most of those interactive strategies promote engagement, student voice, and equity in the classroom. Classrooms are places where habits of mind can be formed and nurtured. Such guidelines as MacDonald's can "live" in every classroom.

Standing with the targeted people is, I think, the key. Unlike trying to punish bullies, which involves external control and may do little to address their underlying beliefs, standing with those who get hurt creates empathy, which is internal, and which can spread to others. Another key to McDonald's strategy is sending a message to the bulies that hate will not be tolerated. Gandhi had a word for this kind of approach - satyagraha, which is a combination of truth + firmness. It really means that you cannot be a passive bystander. You have to be persistent in holding up a mirror of shame to the bullies.

It is good for us to learn from history of change movements that have been successful. Sociology has taught us the importance of cleaning away any graffitti as soon as it shows up, lest it becomes more "normalized." So, the notion of "sweating the small stuff" is important in change efforts.

We know that many bystanders are in a wait and see mode. They are looking for leadership or a larger coalition to lead the way. So, leadership has to be courageous and vocal from the start as to plans of action, so bystanders can be encouraged to move forward with the "right" action.

With the third principle, I would like to add that prevention research shows that in the bullying cycle - all three main roles have to be addressed - victim, perpetrator, and bystanders. We don't want to "victimize" the victim more than he/she already is, but we want to help increase his/her skills to "stand up" to the bully. The perpetrator needs to be dealt with for sure, but it is the bystanders who have a real opportunity to activate positive change. We need to teach kids "upstanding."

Thanks for this great

Thanks for this great addition to the third principle! The role of bystanders is very important. I know that Facing History has done incredible work on this, and one of our most popular videos of late has been "Students Teach Students to Stand Up to Bullying" (which you can find here with an activity guide: http://www.niot.org/nios-video/students-teach-students-stand-bullying).

We also believe in Mexico that teaching strategies would allow us to model the three guiding principles. I agree responding to hate by teaching children since early ages where we can promote equity, tolerance, respect and engagement in the classroom.

Thank you for this lesson

In my opinion ,we can't fight hatred byhatred, only with education ,media,association group ,all together ,help to teach people how tolerated, and respect each others .

Lesson from the Good Samaritan

MacDonald's essay made me reflect on my home training and how my parents instilled in me the importance of treating others as I wished to be treated.  When my mother told me of the good Samaritan - a man considered unworthy and mistreated by his community and yet he did not let that stop him from doing the right thing and picking up the beaten man, dressing his wounds, and paying for his stay at an inn. That lesson is why we must always stand up for the outcast and see what we can learn from them.

My wife and I attended the presentation last night.   Bravo.  I did not know of NIOT.  My wife was especially torn by the pain suffered by Marcelo Lucero's mom.  I was impressed by all of it, and especially by Glo, one of the Tam High panelists who mentioned community opposition to affordable housing.  I told her two of my children have moved away because of housing and the NIMBY (not in my backyard) movement.  She had not heard that term before.  I said the NIMBY movement was a subtle but highly effective way of controlling home values by excluding people who can not afford to live here.  It's an active movement just about everywhere.  NIMBY doesn't discriminate on just one of the usual illegal bases.  It discriminates on all of them by failing to live up to inclusionary principles that are needed in our society more than ever before, given that the campaign to wipe out intolerance and hate is being challenged as never before.  We were very impressed and I am sharing information that was given to us.  This is great work you are doing.  Thank you.  Pat and Olga McKenna