From Warriors to Guardians: Community Inclusion Changes Greenville PD | Not in Our Town
Skip to main content 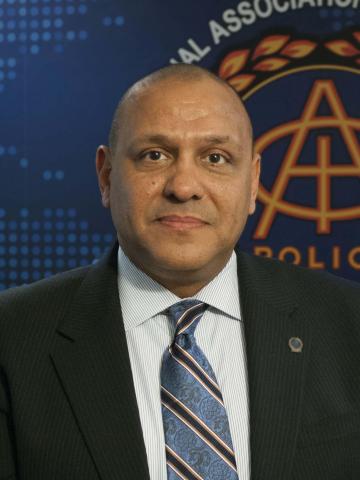 Hassan Aden says an effective police chief must focus not just on what’s going on in his department, but be transparent with those outside of it.

“In order to change the culture, they have to latch onto you, believe in you,” Aden said. “The reality is that a new chief has to remain apolitical, but be politically adept.”

Aden is the Director of the Research and Programs Division of the International Association of Chiefs of Police, a post he took at the beginning of the year. Prior to that, he was Chief of Police in Greenville, N.C., a post he held for two reformative years.

Greenville’s economy, Aden says, had a stark line drawn between the haves and the have-nots, and severe crime and violence affecting its 100,000 people. And to compound that, the ripple effects of Hurricane Floyd’s $1.6 billion in damages from three years earlier continued through the community.

When Aden took the chief spot in 2012, the department had “significant issues of corruption,” a lack of internal accountability, and damaged relationships wit the media and community as a whole.

He faced an uphill battle in changing the department, opening lines of communication, and focusing on inclusion when determining how the police could serve it community. His first day was split between meeting with his department, meeting with the media, and “trying to find which way was up.”

Carving Out the Bad Apples

First, Aden conducted an internal assessment to see the problems for himself.

He found there were bad cops and the good ones couldn’t speak up. So Aden changed the way the Greenville Police Department policed itself by replacing its internal affairs officers.

“I was the one who meted out the discipline,” he said. “I did it personally. It put people on notice.”

All told, his department terminated 17 employees and arrested five officer for behavior ranging from misusing data bases for stalking purposes and stealing drugs and money from dealers and evidence lockers. Those officers were decertified and prosecutors forbid them from testifying in court, measures that prevent them from working elsewhere.

“There are some great officers working in Greenville. There were the bad apples as well, so we carved them out,” Aden said. “The hard-working cops loved it. That caught the community’s attention that we weren’t above the law.”

During this shakeup, Aden hired a new media chief, a television reporter who kept police responsible. The department opened a new era of transparency by releasing news through social media.

“We essentially created our own newsroom,” he said. “Because we were releasing the information, the stories only stuck around for a one-day news cycle.”

Besides changing the way information left the department, Aden focused on how information came in.

But relationships between key community stakeholders were broken. The head of the NAACP wouldn’t be in the same room as the former chief, and Hispanic organizations weren’t even given a spot at the proverbial table, Aden said.

That changed in March 2013 when Aden invited those community members to help craft the police department’s strategic plan.

“In policing, this is a very sacred process. Normally citizens aren’t allowed in there,” he said. “We made huge changes in how we operated in the community. We came out of it with a strategic plan that’s now in its second year. It’s a living document.”

From Warriors to Guardians

Many departments are locked into a warrior mindset, addressing problems with force. Guardians, however, emphasize on serving their community, and that’s how Aden approached his changes.

Aden required anyone who carried a Taser to undergo crisis intervention team training to address an important issue: half of the time, Tasers are used on people having an alcohol, drug, or mental health crisis. That rate dropped in half following the training.

“Policies change conditions that save lives,” Aden said. “It was a huge change in how Greenville P.D. operated.”

Members of the police department above the rank of corporal are now liaisons all across the community, including homeowners associations, business associations, and LGBT organizations.

These officers give out their cell phone numbers so people can call about issues, even if it’s just about garbage piling up.

“The issues that normally have a lot of red tape were handled by these liaison officers,” Aden said.

Now at the IACP, Aden works to give departments resources to help them improve and make the kinds of changes he brought to Greenville. He said his successes in North Carolina were due to an invested community ready for needed change.

“I wonder in another community if it would have worked out the same,” he said.