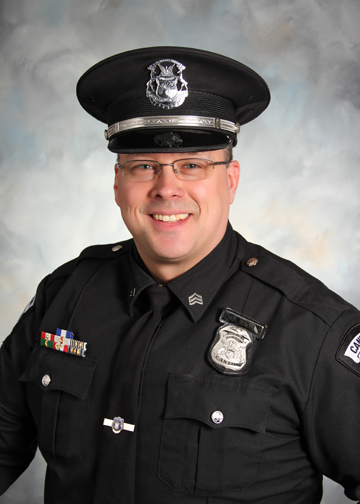 Every police officer in Canton, MI, carries a business card with the department’s mantra: “Policing with a Purpose.”

Sgt. Dale Waltz, who has been with the Canton Police Department for nearly two decades, carries the same card and says it isn’t just a slogan, but a core value of his department.

“We’re a customer service,” he said. “We’re out there trying to solve community problems.”

Those services range from waking up a neighbor at 3 a.m. to tell him he left his garage door open to hosting community forums at the public library to talk about religion, culture, and race.

“We figure if we can reach a few people who can learn about their neighbors then that’s important,” Waltz said.

Being Proactive About Hate

Canton is about 10 miles west of Detroit, and is the farthest western city of Wayne County. The population was just over 90,000 people during the latest census, and is one of Michigan’s fastest growing communities.

The racial make up of the town is 70 percent white, 10 percent African-American, and the rest is other races with a growing Sikh population.

With a relatively low crime rate and only about one or two hate-motivated crimes a year, officers spend most of their time on calls for assistance, property crimes, and retail fraud.

“We’re a diverse community, even though we’re predominantly white,” Waltz said. “We have a community where everyone gets along.”

Incorporating Not In Our Town into Canton

Despite the extremely rare incidence of hate crimes in Canton, Sgt. Waltz reached out to Not in Our Town (NIOT) to incorporate its programming into their community.

Canton’s three high schools share a single campus, putting 6,500 students in one place on every school day. Each school has its own School Resource Officer. Besides responding to incidents, these officers teach classes on subjects such as criminal law and forensics. The department also has a thriving Explorer program where students can become active participants in their community and police department.

“I think it’s important we do these things so there’s understanding and conversations can be had,” he said.

Reaching for Goals through Respect, Understanding

NIOT resources are used to supplement efforts by the Canton Response to Hate Crime Coalition, which was formed nearly a decade ago. Waltz joined the coalition in 2009.

As the Cultural Diversity Instructor for the last 13 years, Waltz actively works with community members to bring about understanding and ensure everyone feels that whatever they face, they will be heard. This includes using inclusive programs like Coffee with a Cop and making newcomers feel welcome.

“You can get statistics on all sorts of things, but my hope is that people will see this and think, ‘Oh, I’m included,’” he said.

Canton police officers are focused on developing strong bonds with their community through community engagement, customer service, and treating people fairly and equally.

Through these practices they hope to become the safest U.S. city of its size.

“People need to know they can trust their police department and that their hate crime will be investigated,” Sgt. Waltz said. “That’s important to me and the entire department.”