The Badge Isn’t a Shield: Sgt. Jessica Hawkins, D.C.’s GLLU Supervisor | Not in Our Town
Skip to main content 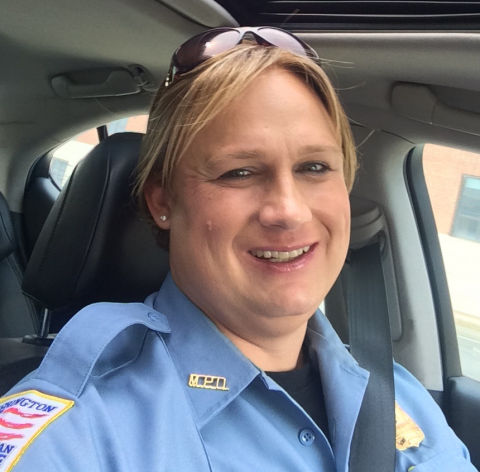 The goal of all community minded police officers should be to make themselves obsolete.

“Eventually my goal is so that we don’t need a specialized unit for a marginalized population,” she said. “I’d be happy to put myself out of a job.”

But the reality—considering some societal temperaments regarding transgender people—is that Hawkins work is greatly needed as the majority of hate crimes in our nation’s capital involve gay men and transgender women.

“We have a large number of hate crimes directed towards these two groups of people,” she said.”When they have an emergency, they call [the Gay and Lesbian Liaison Unit] instead of 911. They might have concerns they might not want to share with your traditional officer. They know they’ll be taken seriously.”

A Hate Crime Victim Herself

Hawkins began as a reserve officer in 1994, started with the Washington, D.C., police department in 2000, and made sergeant in January 2014. A month later, she came out as a transgender woman.

“It was received well by the majority of officers,” she said.

That doesn’t mean the badge shields Hawkins from being a victim herself. Recently, she was being harassed by a group of citizens and one threatened “to cut me open to see what I really was,” Hawkins said.

That was a dumb move. Not only is Hawkins a police officer, but her being a transgender woman made the incident a hate crime. He was charged accordingly.

“It’s difficult being a transgendered police officer on the streets,” she said. “It’s impossible to not take my work home, but thankfully I have really good friends.”

Making the GLLU Present in the Community

In March, Hawkins became the supervisor of the GLLU unit, a specialized team that works as a liaison between the LGBT community and the department. The five-officer unit investigates hate crimes and aligns victims with the resources they need.

If there’s an LGBT event in D.C., the GLLU will be there. This, Hawkins said, allows them the opportunity to get to know everyone in the LGBT community long before an issue arises.

“When you’re doing outreach, you have to actually pay attention to what people are saying,” she said.

Besides the five core officers and Hawkins in the GLLU, all full-duty employees must take a four-hour class about LGBT issues, namely handling hate bias crimes. There’s also a 40-hour affiliate training available for special liaison officers and 50 D.C. officers have completed the training.

But when it comes to being transgendered in America, “there’s a lot of work to be done,” Hawkins said.

She likened it to 40 years ago when people would gawk at an interracial couple, but now, no one bats an eye. Hawkins said a transgender person is something most people aren’t used to, as their brains are hardwired to identify a person as a man or a woman.

“It’s like goosebumps when you get cold. It’s a natural reaction,” she said. “It’s just when it turns into staring or being rude that it becomes a problem.”

For smaller departments who don’t have the resources for a specialized unit, Hawkins recommends officers exercise basic human kindness to victims.

“It all boils down good old fashioned manners and giving people the dignity they deserve,” she said.

This includes using gender appropriate pronouns for transgender people and not, under any circumstances, laughing or cracking any jokes around a victim. People in the LGBT community are hypersensitive to these issues to the point where they’re often on edge, invoking a flight-or-fight response.

“They’re walking around thinking someone’s out to hurt them or humiliate them,” Hawkins said. “You have to listen to them, apply the law, and do your job.”

Project:
Resources for Law Enforcement to Engage with the Transgender Community