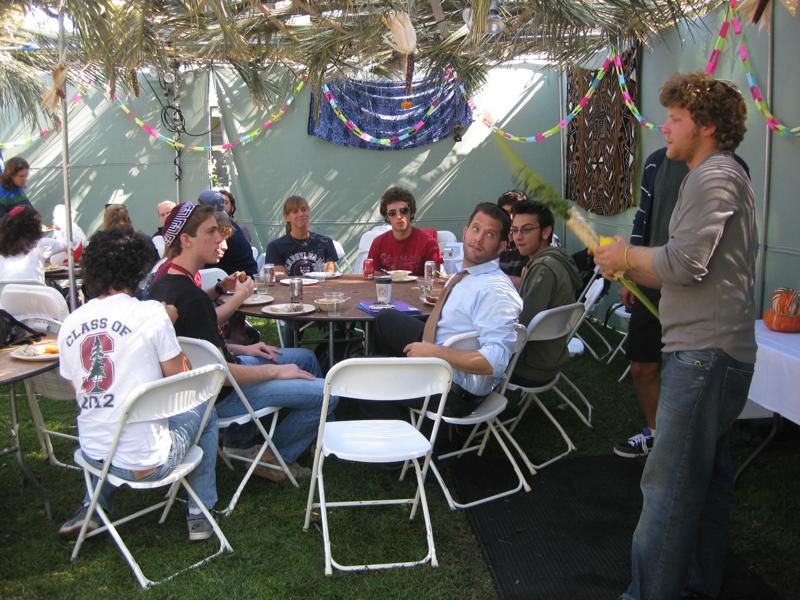 On Oct. 2, Stanford University’s Jewish community celebrated the first night of Sukkot, the harvest festival that commemorates the Biblical story of the Israelites living in booths in the desert after their exodus from Egypt. As is traditional during the eight-day holiday, Jewish students and faculty at the Palo Alto campus ate dinner inside a sukkah, a three-sided hut built to observe the holiday.

The next morning, a Jewish student discovered the sukkah had been vandalized in the night. Someone had spray-painted large penises on the entrance flaps, which like the other walls, were made of canvas.
Campus police were called, students hurriedly covered up the graffiti with tapestries, and Hillel, the Jewish student organization that sponsored the sukkah, alerted the entire campus community.
The hateful attack was not unprecedented. Sukkahs, because they are temporary structures built in the open, and are typically unguarded at night, are prime targets for vandalism, whether inspired by drunkenness or anti-Semitism.
Jeff Rubin of Hillel’s national office in Washington, DC, says that while anti-Semitic graffiti appears in many places on campus, from bathrooms to dormitories,  “about two” sukkahs are attacked each year at North American universities.
In September 2007, the sukkah at San Jose State University was burned in an attack that has not yet been solved. “When I found out it was intentional, my heart sunk,” student Jennifer Tompkins told the Spartan Daily. That same week, the sukkah at the University of California in Davis was defaced. In 2008 the sukkah at the University of Montana was so badly vandalized that it had to be taken down two days into the holiday; this fall, students slept in it overnight to discourage attackers.

What Stanford’s Jewish community didn’t expect, says Hillel Rabbi Mychal Copeland, was the outpouring of love and support that poured in after they sent out their notice.
Emails of shock and concern arrived from the president, the provost, the dean of religious life, and other administration officials. Christian, Muslim and Hindu student groups offered their condolences. One Muslim organization offered to raise funds from all the campus faith-based groups to help buy another sukkah.
“We were saddened that such an act would be carried out on Stanford’s campus, a place that we generally assume is above such acts of hate and intimidation,” wrote Abdulkareem Agunbiade and Mohammad Ali, presidents of the Islamic Society of Stanford University and the Muslim Student Awareness Network. “Please let us know what can be done. It is important for all communities of faith to stand together.”
Overwhelmed, Jewish Student Association president Jeff Gettinger invited the entire campus, particularly the faith community, to join Hillel for Sabbath dinner in the sukkah on Oct. 9, the last night of the holiday. It is traditional, he wrote, to invite ushpizin, or guests, into the sukkah for a meal.
About 60 people crowded into the makeshift structure that Friday evening to enjoy a festive dinner, sing Hebrew and English songs, and worship together. One was student Anand Venkatkrishnan, co-founder of the campus interfaith group Stanford F.A.I.T.H., who had written Gettinger earlier in the week.
“The vandalism of a holy structure is unacceptable to me as a person of faith,” he wrote. “The duty of an interfaith leader is not only to condemn an attack on another, but to prevent it from occurring.”
In his letter thanking the Stanford community for its support, Gettinger noted that a sukkah is not a permanent structure. It is designed to be temporary, even flimsy, with a roof open to the stars.
“This is a reminder that no matter how rooted and permanent we may seem, each individual, each community is dependent on something larger than itself,” he wrote. “What grounds the sukkah is not the canvas and metal that make up the frame. It is the people and community that fill it. We are fortunate enough to be rooted in so strong a community.”
In:
vandalism
support
sukkot
anti-semitic
sukkah
campus
stanford university
jewish
hillel

Some might argue that this act was one of immaturity, not hate. Even if that is the case, the action that the campus took--asking for basic respect and decency from the members of the Stanford community--was still completely necessary. Hopefully their voices will prevent another incident like this.