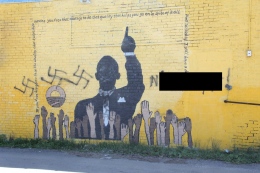 Students at Ohio State University use new media technology to take a stand against a series of hate crimes that took place on their campus over the past few weeks.

On April 5, students were horrified to learn that the words “Long Live Zimmerman” were spray-painted on the wall of the Black Cultural Center. Shortly after this incident, three swastikas along with the word “N----rs” were spray painted over a mural of President Obama.

These hate incidents prompted students to respond quickly, organizing a sit-in that resulted in more than 150 students demanding that the school create a text alert system that would inform students of recent hate crimes that took place on campus. 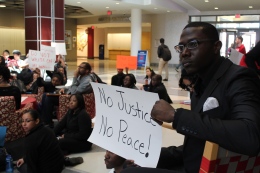 The students have also started a Twitter campaign where students can voice their opinions and come up with ways to unite against hate crimes on campus using the hashtag #OSUstandyourground. Even the University President E. Gordon Gee tweeted from his account about the incident, “Angered to learn of hate speech spray-painted across High Street from Union. This is not our University. #OSUStandYourGround #inclusion.”

The article makes it sound like the whole school when it is just a few? And now because of one person's actions there has to be text alert system. Some on has too much time to think.