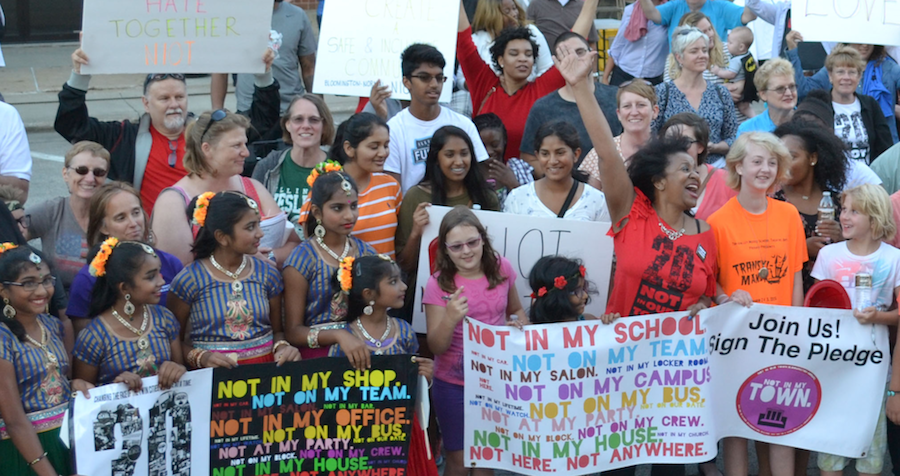 Hundreds of Bloomington-Normal residents gathered outside the old courthouse to remember and renew 20 years of grass-roots action to address racism and bigotry. On June 28th, the street festival featured local student performances, a march, screenprinting, speakers, and a participatory dance experience, all to celebrate diversity. Check back for NIOT video story on the event.

"Somewhere Over the Rainbow" is playing in the background at the Bloomington-Normal airport where I'm waiting for the next flight. Much like the land described in this song, last night's celebration - marking 20 years of Not In Our Town activism - felt like a visit to another place. What sets Bloomington-Normal apart is their demonstrated commitment to keeping hate and bigotry from infecting their civic life. I witnessed hundreds of people gather, speak, dance, rally and march in a proud and joyous display of diversity.

It was a beautiful summer night near the steps of the old courthouse. Hindu, Christian, Jewish, and Muslim faith leaders, along with the Mayor, League of Women Voters, labor organizations, Bloomington and Normal Police Departments, PRIDE, the NAACP, and hundreds of community members joined current leaders and founding members of NIOT to reaffirm their commitment to building an inclusive community. Hate hasn't been defeated in this town, but the stand this community has taken is a remarkable example of how to address hate at the local level.

Bloomington-Normal founded their NIOT movement during a time of crisis when Black churches were being torched across the South, and they wanted to prevent acts of hate from surfacing in their town. Throughout the years, prevention as a guiding principle led to the manifestation of many anti-hate rallies, teach-ins, events, and pledges at local schools to put an end to racism. In the wake of the recent hate crime killings of 49 LGBTQ people in Orlando and a year after nine Black lives were taken at Mother Emanuel AME Church in Charleston, the people of Bloomington-Normal at this street festival are sending a clear message about responding to hate: "Not In Our Town."

In the past 20 years, NIOT-BN has held marches, vigils, public forums, student-led school programs and inter-faith activities. The effort was inspired by NIOT in Billings, Montana in 1993, when that community came together to stand against hate crimes. This led to the 1995 PBS film, Not In Our Town. The film launched a national movement, with Bloomington-Normal one of the first communities to adopt the theme.

Patrice O’Neill, Not In Our Town Founder and Executive Producer said this of the central Illinois efforts:

“If it wasn’t for the actions of the people of Bloomington-Normal, there would be no Not In Our Town movement. The story of Billings, Montana’s stand against hate created a model for action, but the people of Bloomington-Normal launched the movement that spread across the country and around the world. What is most inspiring about this community is their innovation, leadership and commitment they are showing 20 years later.”

On the 20th anniversary of Not In Our Town in Bloomington-Normal, this is a great opportunity to review the challenges that have been overcome. This NIOT Bloomington-Normal scrapbook, a compilation of newspaper clippings, documents many years of activism stretching back to 1995. This collection is a celebration of activism, and an expose of the issues that remain to be worked through.

 Gathered at a vigil to remember the victims of Orlando.

 Erected billboards against discrimination throughout the city.

 In response to Ferguson, Missouri, NIOT members and the police chief went live on the radio to discuss relationships between the African American community and law enforcement; NIOT-BN also sponsored a community forum with local law enforcement, which drew over 300 attendees.

 After the San Bernadino terror attacks in 2015, 300 Bloomington-Normal residents and interfaith leaders gathered on the courthouse steps to support their Muslim neighbors.

 Relaunched a “Not In Our Schools” effort, where area students plan their own school-based activities to celebrate diversity.

Reaction to our 20th -- a safer community

I had a wonderful experience Friday that demonstrated the palpable impact NIOTBN is having in the community. A friend and I had lunch Friday at the Amaravati restaurant on Hershey Avenue (the biryani rocked, BTW), and as we were opening the door for a group of West Asian/West Asian-American coworkers, one turned, pointed to my NIOTBN T-shirt, and announced "Hey, I was there!" The group, which had been fairly quiet, lit up and start talking about what NIOTBN is and joking with us. My friend in the past has been passively supportive of my support of NIOTBN largely because we're friends, but has always questioned the local need for and significance of what we do. But he was impressed by the positive reaction our group elicited from our fellow diners, and the way that somewhat somber group brightened and connected with us. I stressed to him that NIOTBN's not about beating people into "correctness" or instantly forcing change but primarily about affecting what DOESN'T happen in this town, and letting every community feel safe and included. He may not come to the next rally, but he saw firsthand how our effort assures folks that they aren't alone, that they have our support and the community's interest, and that they have a firm and meaningful place in this community.
Our Facebook responses to Tuesday's event postings indicate that our commitment to interfaith/multicultural cooperation and communication is winning the trust and public confidence of and interaction by the Islamic community, as well. The interfaith dedications Tuesday were phenomenal and, I think, highly educational for the residents who came out. And I think seeing leaders of our various faith communities chatting, laughing, and celebrating together offstage was a powerful image for Twin Citians who are exposed to increasingly toxic sociopolitical rhetoric and scapegoating.
Friday's experience was as tangibly affirming proof of the subtle, subconscious, but definitive grassroots evolution NIOTBN's helped foster as I've seen outside the adrenalin and emotions of a public event. The streets of this town are safer for all because our group invests the time and heart and reason, and guys like my skeptical lunch buddy are beginning to get that.

Thanks for inspiring us!

I was so proud to join Not In Our Town leaders and community members as we celebrated your 20 years of persistent action to stop hate and promote kindness, respect and unity. I remember the first march twenty years ago, and being hopeful at the time that our movement would continue.  It's exhilarating to see all you have accomplished, and to know that many of the original activists are still involved, and that new leaders have emerged to take on this giant task of building a more inclusive community. Your town has changed, and become even more diverse. You have worked through difficult challenges, without losing your commitment to each other and the cause.   I interviewed some of your young people, and they are reflecting the values that you are presenting to them through NIOT.   We have so much to learn from you. Thanks so much for inspiring all of us! Patrice O  Not In Our Town, Oakland, CA