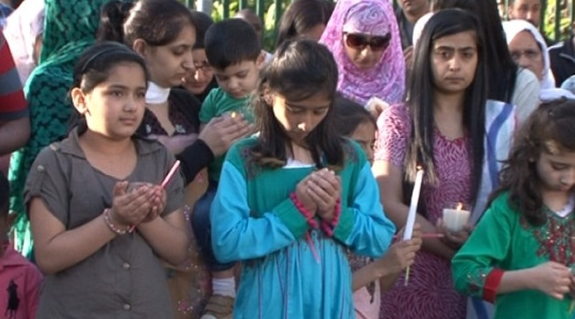 After the murder of 75 year-old Mohammed Saleem in Birmingham, people came together for a vigil. Credit: ITV.

On June 4, a mosque and Islamic cultural center in Muswell Hill, North London was burned to the ground. The letters ‘EDL’, the acronym of the anti-Muslim group English Defense League, were found graffitied on a nearby wall. Hours after the news broke, EDL members took to Facebook with comments such as “Burn them all”, “love it!!” and “shoulda been full.”

The mosque in Muswell Hill is one of eleven to be
attacked since May 22. Credit: The Guardian

The mosque’s community responded to this devastating act of violence with grace. Center committee member Sayed Bana, 60, said, “To the perpetrators of this attack I say, forget about what you are doing and come join us in a dialogue and let’s move forward to a future without violence. I’m not angry at those behind the attack, I feel sad for them.”

This incident is just one of hundreds of retaliation attacks against Muslims which have taken place in the UK since the brutal murder of soldier Lee Rigby by Muslim extremists in Woolwich, London on May 22.  Though Muslim community leaders were quick to condemn the violence and call for calm and interfaith solidarity, the incident has been seized upon by anti-Muslim groups, who are using the killing as an opportunity to recruit members and stage rallies in cities up and down the UK.
Tell MAMA (Measuring Anti-Muslim Attacks), an advocacy group and third-party reporting service for Muslims who experience hate attacks in the UK, reported that 200 anti-Muslim hate crimes have been reported to their service since the incident.

Long before the Woolwich murder, anti-Muslim incidents were common in the UK. In a January 2013 speech Baroness Syeeda Warsi, Minister for Faith and Communities, reported new figures stating that 50-60 percent of religious hate crimes in the UK target Muslims. She is often quoted as saying that anti-Muslim prejudice had passed the “dinner table test,” meaning that anti-Muslim sentiment is so common in the UK today that it has become an acceptable topic of conversation at a dinner party.

The pervasiveness of anti-Muslim sentiment has serious consequences for the UK’s Muslim population, who are frequently targeted by hate attacks. Tell MAMA’s statistics for 2012-13 suggest that women, particularly women who wear the hijab or niqab, are most likely to be victimized by street attacks. Taxi drivers are also at a high risk of being targeted.

Seventy-four percent of the incidents reported to Tell MAMA in 2012-2013 were online attacks via social media. Tell MAMA director Fiyaz Mughal told Not In Our Town that the Internet is commonly used by members of anti-Muslim groups to harass and belittle Muslims, whilst drawing in support from individuals who are not yet members but who sympathize with their views. Tell MAMA reports online hate incidents to the relevant police forces, and pushes for Twitter and Facebook to remove hateful feeds and pages from their networks.
Supporting the Muslim community

Mohammed Saleem, 75, was stabbed to
death while walking home from evening
prayers on April 30. The local community
held a vigil to honor him. CREDIT:
onislam.com

Mughal told Not In Our Town that it was important for non-Muslims to support their Muslim neighbors, and let those who are victimized know that there are people outside the Muslim community who care about them.

The background of persistent anti-Muslim sentiment not only among hate group members but in mainstream public discussion is a serious problem which cannot simply be wished away. The EDL, which usually struggles to muster more than 40 people at their demonstrations, staged a rally attracting around 1,000 protesters in London on May 27 which ended in violent disorder and a number of arrests. The EDL has also gained 80,000 Facebook followers since the Woolwich murder.
Nonetheless, in these extremely troubling times, there remains hope that people of different faiths can take action together, speak out against acts of hate and up for each other. Ahmed Sabik, Imam of a mosque which was firebombed in Grimsby last week, has spoken about the outpouring of support he and his community have received from the wider community since the attack.
“A huge number of people have sent cards or emails. People have been saying 'we support you' and 'these crimes don't represent us' and 'you are welcome here,'” Sabik said. “We were so happy because it shows we are all united against these people who wanted to destroy our harmony."
In:
hate crime
Muslim
vigil
Anti-Muslim
hate group
UK