This is the second year in a row that Lancaster's students, teachers and parents have celebrated the start of Bullying Prevention Month in their city.

Dozens turned out to watch their mayor and city council sign a Not in Our Town proclamation declaring Lancaster's schools a safe zone from intolerance and hate.

Check out the full story in The Antelope Valley Times.

Just like last year, Mayor R. Rex Harris joined with local school district administrators to officially sign the proclamation that challenges local leaders and students to stand up to bullying in their schools.

WHEREAS schools make substantial contributions to the future of America and to the development of our young people as responsible and productive citizens; and

WHEREAS excellence in education is dependent on safe and distinguished environments; and
WHEREAS bullying has escalated to unacceptable proportions across the globe, interfering with the emotional, social and academic development of our youth; and
WHEREAS we must safeguard schools for our children and guarantee them an environment that holds promise and security; and
WHEREAS it is critical that we acknowledge and heighten awareness about the negative effects of bullying, which may include the risk of teenage suicide; and
WHEREAS it is the personal responsibility of all citizens of the city of Lancaster to create solutions to prevent bullying, including educators, parents, business owners, civic leaders and law enforcement personnel; and
WHEREAS the city of Lancaster wishes to continue the coalition of anti-bullying schools. This coalition will include the school districts of Antelope Valley Union High Schools, Eastside Union, Lancaster, and Westside Union;
NOW, THEREFORE, be it declared that the community of Lancaster, California will designate the month of November 2012 to anti-bullying activities and stand together as a community, united, with unwavering resolve that when it comes to bullying, we stand by this pledge and proclaim:
NOT IN OUR TOWN! 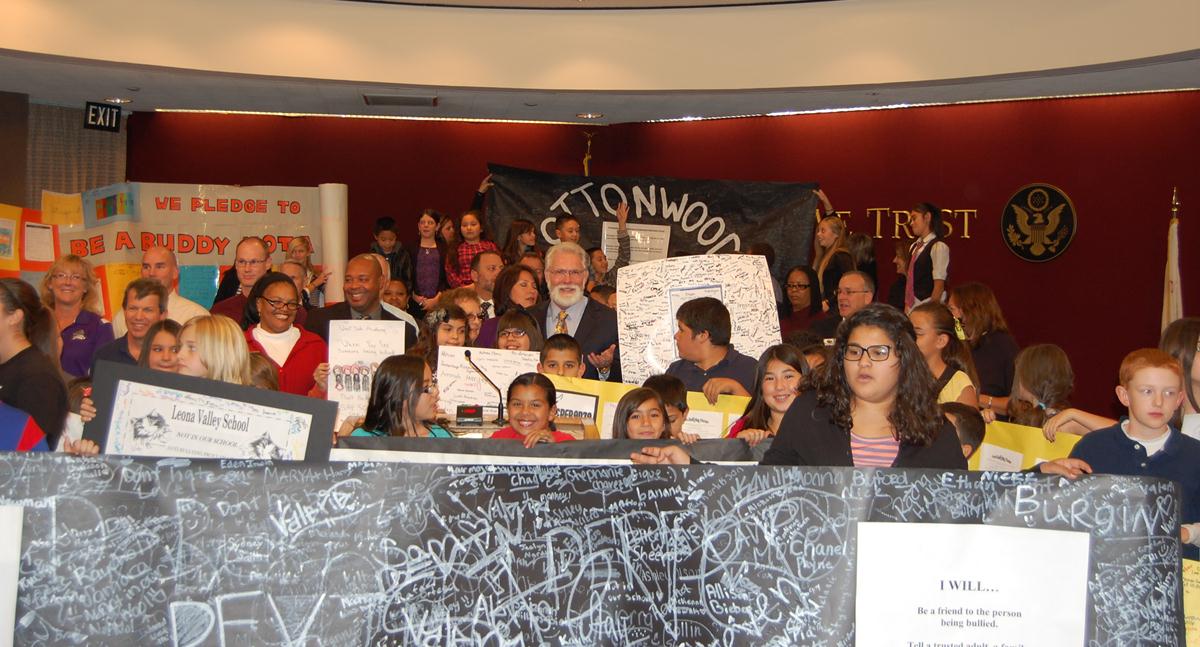 The four school districts from around the Antelope Valley in Southern California have all pledged to honor the month with events and activities in their schools dedicated to getting the word out about their stand against bullying.

But administrators have also been dedicated to promoting anti-bullying efforts in their schools year round - Piute Middle School even sends its students as embassadors to other local schools, where they teach younger students about bullying through skits and workshops.

Check out some of the other ideas schools from the Antelope Valley have been trying out to help their students stand up to bullying in their classes.

In:
California
Not In Our Town
Bullying
Lancaster
proclamation
awareness and prevention