Group Profile: Kootenai County, Idaho Keeps the Heat on Hate | Not in Our Town
Skip to main content 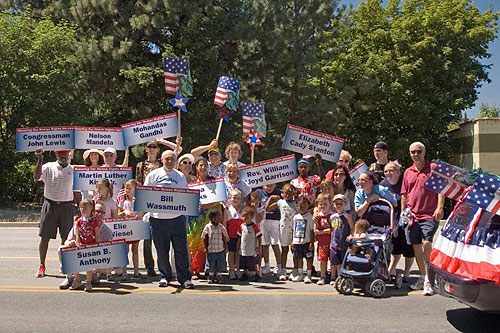 For many in the anti-hate movement, the lessons that have emerged from Northern Idaho are legendary.

People like Father Bill Wassmuth, whose house was bombed by neo-Nazis in Coeur D'Alene, helped influence many community leaders working to address the dangers of hate.

The Kootenai County Task Force on Human Relations, a longtime Not In Our Town affiliate in northern Idaho, is best known for its key role in defeating the Aryan Nations. A landmark $6.3 million court judgment in 2000 bankrupted the notorious hate group, which has never regained its momentum.
But the Task Force has done a lot more than that since its founding in February 1981.
Leaders Norm Gissel and Tony Stewart often travel to communities seeking advice about how to deal with hate groups. Recently, they spoke in John Day, Oregon where the Aryan Nations were trying to buy property.  Hundreds of people in this small community showed up for their talk.
Their sustained activities in the community are an inspiration.  From public TV shows to massive rallies against hate, from pushing forward hate crime legislation to sponsoring scholarships, the Kootenai County Task Force on Human Relations has become the state’s leading voice against prejudice, racism and hate-based violence.
Task Force co-founder Tony Stewart, who taught political science at the North Idaho College for many years, shared some of the group’s lessons with the NIOT team in July 2010:
Focus on youth education: MLK Day
The KCFHR uses Martin Luther King Day as a powerful tool in its efforts to eradicate bigotry through education.
For 25 years the task force has worked with fifth-grade classes in the 15 middle schools in the Coeur d’Alene and Post Falls districts on an annual Dr. Martin Luther King, Jr. Children’s Week, which takes place every January the week before the federal holiday.
Each class begins preparing in September. The children get help from their teachers and the task force, but the actual program is up to them. The week before the holiday, civil rights speakers tour the schools to speak to the fifth-graders. Activities culminate in a formal program held at North Idaho College, where fifth-graders from all the schools gather to put on their program.
One student from each class reads his or her essay about the influence of Dr. King. There’s a choir, a film, a dance performance, and at the end, candles are lit in memory of the slain civil rights leader.
“It’s the students up on stage, children teaching other children—that’s what’s so powerful,” says Stewart.  “The first year we ran it, we made a mistake. We did the program for them. That’s not the way to do it.”
The task force decided to limit the project to one grade level, so it would be manageable, but they run it in every school so every child in the district goes through it. Fifth grade is a good age, he says—old enough to understand the issues, but still malleable and willing to take part.
More than 30,000 children have gone through this Dr. King “rite of passage” since 1986. Some of them are now parents, and their own children will take part in the same program. That continuity is important, Stewart says. “The young people who go through it, as they become parents their commitment to human rights is stronger, and they pass it on to their kids.”
Build coalitions to leverage your strength
In the spring of 2009, one of the newly re-organized Aryan Nations offshoots began distributing hate literature in northwest Idaho, its former stomping grounds.
Under the law, they have that right. But those who oppose the message of hate have the right to speak out against it.
Within 48 hours, Stewart got together with a local police sergeant and organized a press conference on the Washington-Idaho border. They invited the mayors and police chiefs from seven neighboring towns, as well as the Spokane County sheriff, the Kootenai County prosecutor, and leaders of the Coeur d’Alene Tribe. Each individual took one minute to denounce recent hate incidents in his or her jurisdiction, and to vow swift investigation.
Instead of each town responding on its own, this joint effort drew much more press coverage and sent a powerful message that the Aryan Nations and their ilk were not welcome anywhere in the region.
“We looked at the situation and planned our strategy,” notes Stewart. “When things like this happen, we do not remain silent. But we don’t confront them either. We counter by doing something else, at the same time. Dr. King never went to a KKK rally, never!”
The importance of new and old blood to keep a group going
The average life expectancy of a nonprofit organization is nine years.
So how has the Kootenai County Task Force on Human Relations kept going for three decades?
Stewart chalks it up to what he calls "stickability." He and one colleague have been on the board since the group’s creation, providing needed continuity. There are a handful of active members who have also been there since the mid-1980s.
The continued presence of these same faces gives the task force a certain public legitimacy, Stewart believes. People in Coeur d’Alene look to the group to lead the fight for diversity and against racism; they expect the task force to take up those reins, and the task force doesn’t let them down. “It’s a great honor to be able to speak for them,” says Stewart.
The lesson? “Don’t have term limits for your board,” he counsels. “New people have come on, bringing new blood, but we have this strong core that is on-going.
“There has to be a commitment and it has to be on-going. Don’t let yourself get burned out. We’re as strong as we’ve ever been.”
Local Lessons:
Prevention and Community Engagement
NIOT:
youth
task force
racism
Coeur d'Alene
coalition
education