A community rocked by hate is awakened and transformed.

As the Sikh community in Oak Creek, Wisconsin prepares for Sunday prayers, a deadly hate attack shatters their lives, but not their resilience. After six worshipers are killed by a white supremacist, the local community finds inspiration in the Sikh tradition of forgiveness and faith. Lieutenant Murphy, shot 15 times in the attack, joins the mayor and police chief as they forge new bonds with the Sikh community. Young temple members, still grieving, emerge as leaders in the quest to end the violence. In the year following the tragedy, thousands gather for vigils and community events to honor the victims and seek connection. Together, a community rocked by hate is awakened and transformed by the Sikh spirit of relentless optimism. 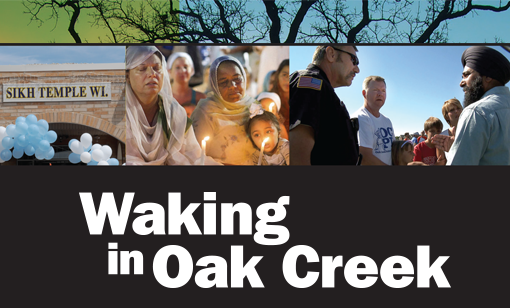 There is no place in the United States of America for hate crimes of any sort, as a veteran it disgusts me to see so called supremisists (more like failures) that can have this much hate. I wish the Sikh community all the best from the REAL AMERICANS.

Discrimination in our city ( Billings, Montana

I am merely saddened with the fact that this is a huge issue, not only in our beautiful city but around the world as we know it !! God made us all the same no matter what our color is , we all bleed the same & we all have the same body parts within!! This has come to my full & utmost attention after observing and seeing alot of this awfull behavior here in my city!! May PEACE & LOVE along with my prayers be with those that were raised to merely hate those with different colors!!

I requested the film for screening, then noticed that there are lesson plans. I'd like to show this and do a lesson on it in my classroom at Noyo High School, a continuation high school.

Great to hear that you'd like to show the film to your high school class, Karen! We'd love to hear how your screening goes. Please drop us a line at info@niot.org—and also feel free to let us know if you have any questions about using the film with your students.

You can also download more free lesson plans, resources, and short videos in the Not In Our School section of our website.

Hi my agency is interested in obtaining a free copy. Thanks.

To request a DVD, please go to the Request a DVD page for Waking in Oak Creek, and we will send you one when you fill out the form. It's free!

If you have any questions, please email info@niot.org.

As  a new school counselor, I am always looking for lesson plans to help students see differences as something to appreciate, not tolerate.  I feel like the earlier we start planting these seeds, the better.  I'm glad i found this site.  Thank you!!  OH, and I would love a free DVD.

Thanks so much for your interest in this DVD! We ask that all requests for DVDs be completed by filling out the form found on the "Request a Free DVD" page. Once that is done, we will be able to get a DVD to you very quickly.

If you have any questions, please email info@niot.org

Thanks and have a great day!

Truly sorry for the loss. It is shame and sad .

Since the election of Donald Trump, news outlets and social media accounts have swelled with reports of swastikas at schools, racist taunts, and other hate-fueled attacks and acts of intimidation.I believe if we want to see change , we must change within first. In all aspects such as civilian responsibility, government controlled corporation , and literally everything that was promised of America the great. ! I believe our history and influence has been usurped , so in order to set us free , we must first be set "free".

RSVP to Gurdwara, El Sobrante Event on May 24

I'm trying to send an RSVP for two people to the Gurdwara in El Sobrante for the showing of the film there tomorrow (May 24).  Please let me know if there is a different place to send the RSVP.  Thank you.  Jonee Grassi (joneemg@aol.com)

as a Spanish speaking person learning English it has been difficult to communicate and get my point across when I needed something. I have been a victim of hate even in college I try to work with others but I cant get my point across and they ignore me and I am left to myself. I can associate with these victims because it still happens to me and it is difficult to manage.

Over 3,000 people have signed up to host screenings of Waking in Oak Creek in all 50 states and four countries--in libraries, town halls, law enforcement offices, schools, and houses of worship.

We have seen the power of this story to move people: Over 90% of surveyed viewers said they were more likely to take action against hate or intolerance in their own communities after viewing the film.

NIOT’s partners have promoted Waking in Oak Creek to an audience of 2 million+ people.

Promotional Partners and Collaborators Include: 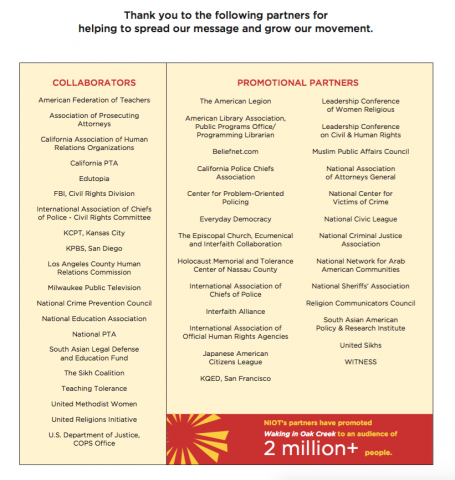