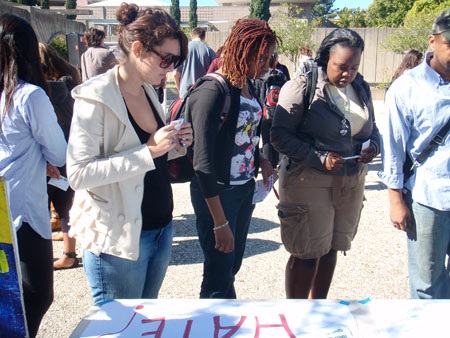 Students at the University of California in Santa Barbara spent a week recently speaking out against hate crimes on campus.
They are one of many schools nationwide that run anti-hate campaigns, some of them on an annual basis.
The  “Speak Up Against Hate Campaign," organized by the Office of Judicial Affairs, kicked off with a rally where students signed pledges to “Speak Up” against hate, and shared their own experiences with discrimination.
The pledge cards committed signators to speak up in the face of bigotry rather than remaining silent, especially on behalf of those "who may not have the courage to stand up for themselves." The pledge cards were attached to a blanket that is on display at the UCSB library.
Senior Kenisha Day talks about why she's involved with the campaign:
"In my four years, I've heard about countless situations where people were targeted and attacked based on their religious affiliation, gender, sexual orientation, race, or an aspect of their culture," she says. " I lived on the Black Scholars floor during my first year, and people would sneer at us and utter offensive remarks in the dining commons. In my experience, I found that people are ignorant of other cultures because they have not had the opportunity to understand or come into contact with those cultures."
A Student Affairs survey found that 173 out of 271 students said they knew a victim of a hate crime or incident. “Though hate crimes/ incidents occur quite often, most are usually not reported for various reasons,”says Doug Wagoner, intern at the Office of Judicial Affairs. “People may not want to make a big deal out of it, or may not know who to turn to.”
Kenesha believes that anti-hate campaigns on campus help ensure student safety. "I enjoy participating in these awareness weeks because it gives me the opportunity to not only meet people dedicated to promoting equality, but an opportunity to educate people who are unaware that hate does in fact exist."

The week concluded with an open-mic evening at a local pizzeria hosted by the Culture of Youth Progressing Humanity in Expression and Rhythm (CYPHER).

A little taste of UCSB's Cypher from TruthandArt on Vimeo.

Has your school run an anti-hate, pro-diversity campaign? Share your story here!

Why I Participate/Organize Anti-Hate Week Events

I personally participate in/organize anti-hate events because like all social problems, affecting change is impossible unless individuals choose to act; and, the more massive the collective of individuals invovled in an action the more likely the goals of that action will be achieved. In short, I suppose I act because I believe in the human ability to make a difference. If one is not proactively working (in whatever capacity they are able) to make a difference in this world then they effectively revoke their stake in global/national issues, and they run the risk of becomming one of the complacent, apathetic, masses. I refuse to be part of the problem, I refuse to relinquish my right to speak up, and I believe that individuals, especially groups of indiviudals of a like-mind have the agency to shape the world around them.