UC Regents tackle intolerance, hate crimes on campus | Not in Our Town
Skip to main content 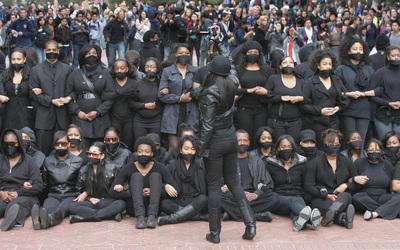 San Francisco, CA: With California in economic crisis, and the state's schools facing a crippling budget crunch, the University of California is in the midst of one of its deepest, most disturbing conflicts over race, tolerance and diversity in recent memory.

The UC system from Davis to San Diego has been rocked by racist, anti-Semitic and anti-gay incidents, creating an atmosphere of fear and distrust. The impact has reverberated nationwide, prompting Gov. Arnold Schwarzenegger to condemn the "intolerable acts of racism" on UC campuses--harsh words indeed from the state's highest office.

The UC Board of Regents is meeting tomorrow at UC San Francisco to address the situation.

UC San Diego erupted after a racially-charged off-campus party Feb. 15 where students were encouraged to dress and act according to offensive African-American stereotypes.  On Feb. 26, a noose was discovered hanging in the university library, and March 1 a KKK-style hood was draped on a statue, prompting the Black Student Union and other student organizations to implore Chancellor Marye Anne Fox  to take action to ensure safety for students of color. The Black Student Union reached an agreement with the chancellor on March 4, but tempers are still frayed.

Also at Irvine, 11 students were arrested Feb. 8 for heckling the Israeli ambassador, leading to charges that anti-Semitism was rife on that campus.

At the University of California, Davis, thousands attended a public meeting in late February focused on anti-gay and anti-Semitic vandalism: the school's LBGT Resource Center was attacked, and a swastika was carved on a Jewish freshman’s dorm door.

On March 3, three more swastikas were found spray-painted around campus.

At UC Santa Cruz on March 1, a picture of a noose was found in a university bathroom.

The Regents meeting Thursday will commence with a 40-minute public comment period at 8:30am, followed by a discussion of the recent incidents and how the UC administration plans to prevent such events in the future.

In a laudable show of transparency, the meeting  will be streamed live at: http://www.ustream.tv/regentsmeeting; An archived tape will be available at the same web address afterwards.

This past weekend, NIOT staffer Emma Clune spoke with an African-American mother in San Diego, who was considering where to send her son to college. The woman said she would not send him to UC San Diego--she fears for his safety in such a racially charged environment.

If a San Diego mother is afraid to send her own child to a University of California campus, serious changes need to take place.

What do you think? Have you faced similar problems at your college or workplace? How was it handled?