Profile: Parent Susan Guess Stands Up to Bullying in Kentucky | Not in Our Town
Skip to main content

Profile: Parent Susan Guess Stands Up to Bullying in Kentucky 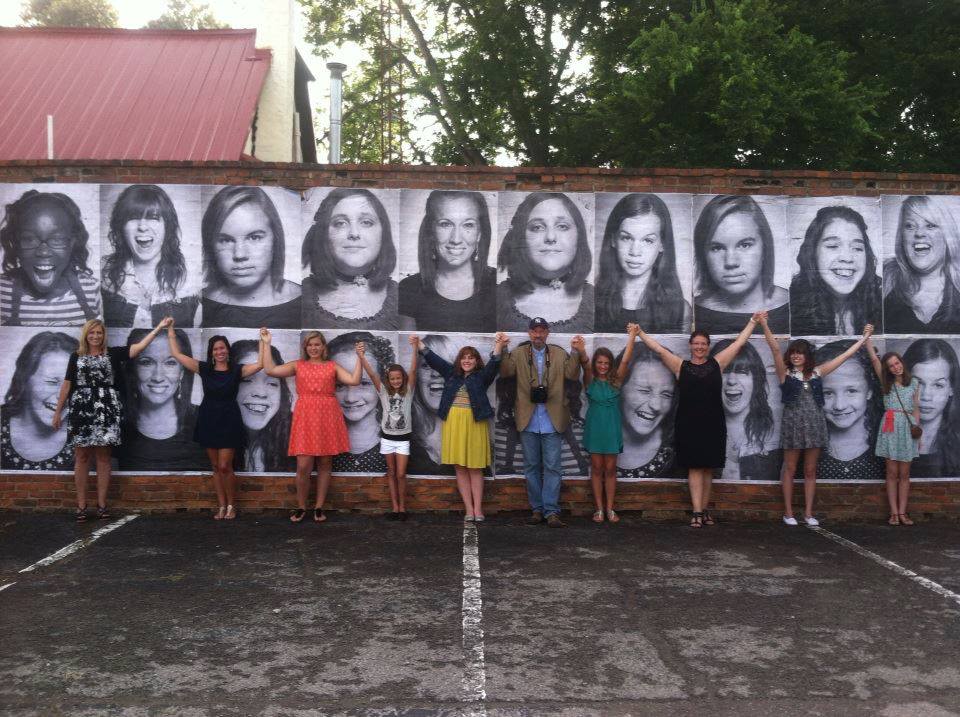 If you ever wondered what one person can do, meet Susan Guess. After her 8-year old daughter was bullied two years ago, she moved into action together with her daughter to raise awareness and get her whole community involved in anti-bullying activities.

Recently, the two traveled from their home in Paducah, KY to spread the Not In Our Town message in New York. From events at local schools to kindness campaigns, from starting a Mayor’s Task Force and approaching Kentucky’s Governor to start a Statewide Not In Our Town effort, these two are unstoppable. 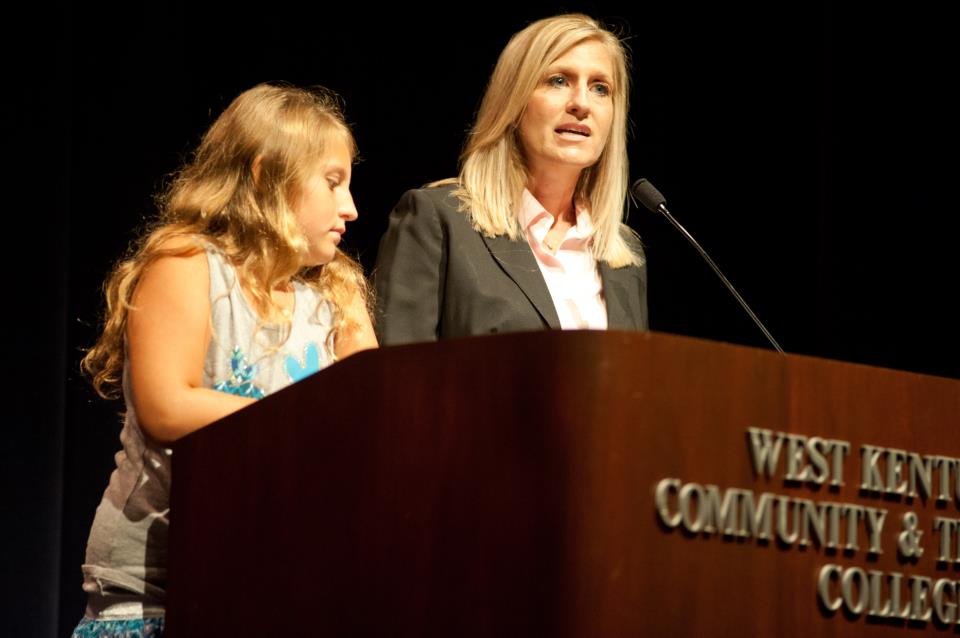 Susan Guess speaks with her daughter, Morgan
—Becki Cohn-Vargas, Not In Our School Director
Tell us about your community.
Paducah, KY is famously described as halfway between Possum Trot and Monkey’s Eyebrow (true names of towns). We are also about halfway between St. Louis and Nashville. We are a community of about 100,000 people.
We have three distinctions. We are home to the only remaining operating uranium enrichment facility (although it is closing soon), the site of the National Quilt Museum (some 30,000 people ascend on our town each April), and we are the home of one of the early school shootings. On Dec. 1, 1998, a young man opened fire at Heath High School and killed three girls. Several others were injured, including Missy Jenkins, who was paralyzed.
What kind of work do you do in your community?
I am the senior vice president and marketing director for Paducah Bank. I serve on the Murray State University Board of Regents. I have chaired the Paducah Area Chamber of Commerce board twice (the second woman to chair and the second person to serve twice). I chaired the Lourdes Hospital Foundation for 6 years. I received the Governor’s Volunteer Service Award for chairing a $100,000 memorial garden at Heath High School after a school shooting that left three dead. I won a national HUD community service award for starting girl scout troops in low-income housing.
When did you become involved in anti-bullying work and why?
I became involved in anti-bullying work two years ago when my 8-year-old daughter, Morgan, was physically bullied by a classmate. She began to experience emotional and physical symptoms as a result of the bullying. She began having stomach spasms and her doctor declared her to be clinically depressed. She was put on antidepressants for much of her 3rd grade year. Her doctor suggested at the end of that school year that we remove her from the school but we chose not to. 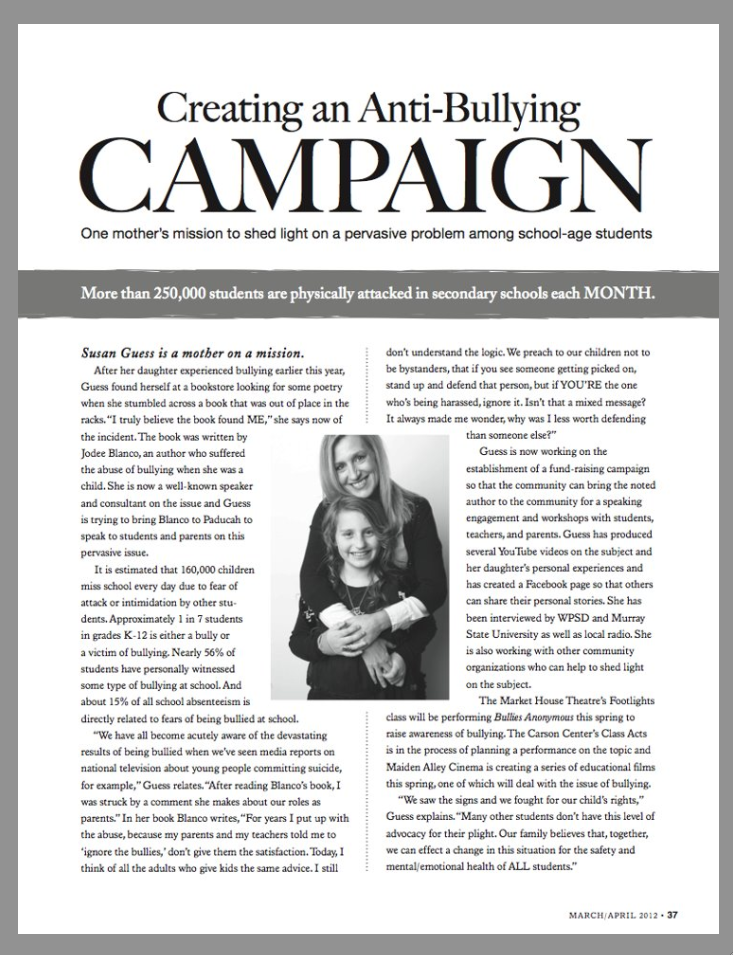 The bullying seemed to come in waves and Morgan describes the fear of never knowing when she would experience it. Her father and I told her that bad things are going to happen in life and you can choose to ignore it, blame others or to be a part of the solution. Morgan chose to be a part of the solution and continues working with me to make a difference in the culture of bullying in our community and beyond. She has truly found her voice and discovered that she can make a difference.
In the past two years, we have brought a free screening of Lee Hirsch’s BULLY movie to Paducah, launched the Guess Anti-Bullying Foundation and raised $20,000, and worked with Paducah’s mayor, county judge, and human rights commission to sign a community-wide anti-bullying resolution. The Paducah mayor appointed a community-wide anti-bullying task force, and we have also been working with the Kentucky governor’s office in an attempt to inspire him to appoint a statewide task force.
How did you get involved with Not In Our Town?
We found the Not In Our Town organization by accident. We obviously thought the name itself fit our goals perfectly. When BULLY Director Lee Hirsch came to Paducah we had signs made that said “Not In Our Town” and were photographing movie visitors with the sign. Lee shared that there was a Not in Our Town organization and the rest, as they say, is history.
We have used the tools and resources of the organization and we feel that they have become a trusted resource and a true advocate of our work. We continue to use the Not in Our Town slogan as we believe there is no message that carries a stronger statement than it. We believe it directs our work and keeps us focused on the goal of changing the culture of bullying in our community.
What work are you most proud of?
I am most proud that my daughter has learned that she has a voice and that she can make a difference. Together we are proud to know that we have been able to provide hope and help to those who are experiencing bullying.
What do you see as the challenges to anti-bullying work in your town?
Real change doesn’t happen overnight and while we have seen a more open-minded community as it relates to this subject, there is just so much more work to be done. We need students, parents and community leaders to remain committed to sustained change. We have been able to raise awareness but the real change comes from action following a better informed community. We are at that point in our journey and I am confident that we will set an example for other communities to follow.
What gives you hope?

I am always hopeful but there have been days when I was afraid (for me and my daughter). I still have those days sometimes. Having said that, and with some space between our bullying incident and today, I think I have a more objective perspective where I know we have made a difference and others are coming together to do the same thing.  And to see where Morgan was two years ago and today shows me that while bravery may be required to resolve a bullying incident or to change a school, a community, a culture—it is certainly worth it.
My daughter’s life will be different and better as a result of us standing up united against bullying, against violence, and against small-minded views of what bullying really is. I know that she will forever be more thoughtful and sensitive to the feelings of others as a result of her own experience. And while I want to make a difference for others, my greatest legacy will be her knowing that I stood up for her!
What advice would you give to other community leaders who want to address bullying and intolerance in their town?
Be bold. Be brave. Be patient.
Learn more at the Guess Anti-Bullying Foundation Facebook page and the Paducah Mayor's Anti-Bullying Task Force page.
Start an anti-bullying campaign on your campus with the Not In Our School Quick Start Guide.
In:
profile
not in our school
Not In Our Town
Bullying
community
bully
Paducah
antibullying