From Portland With Love: Facing Fear in a Moment of Hate | Not in Our Town
Skip to main content

From Portland With Love: Facing Fear in a Moment of Hate

By Patrice O'Neill  PART ONE IN A SERIES ON FACING FEAR 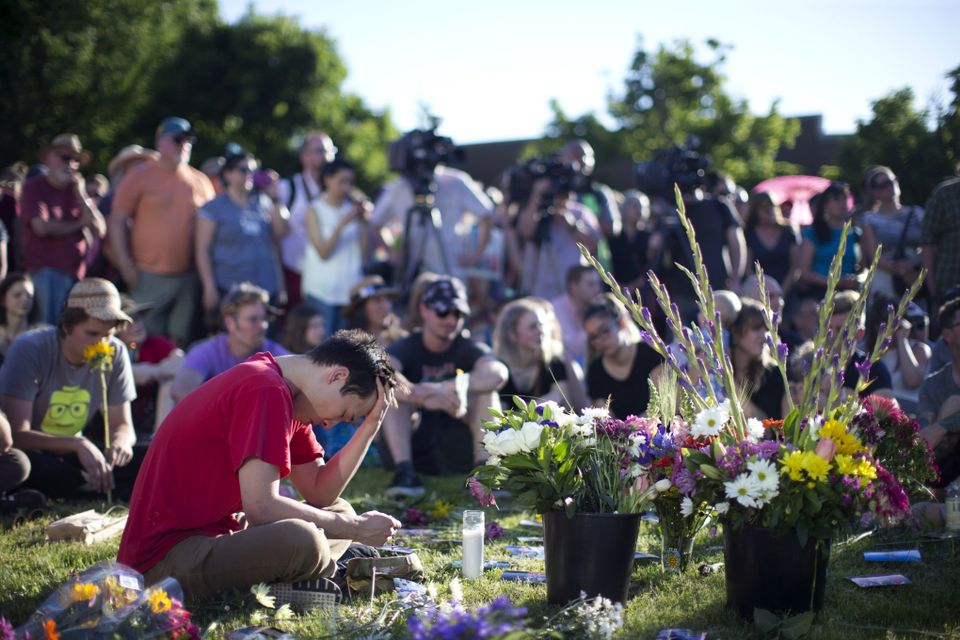 “Tell them, I want everybody on the train to know I love them."

Those were the dying words of Taliesin Myrddin Namkai-Meche who was stabbed by a white supremacist on a commuter train in Portland. Meche, Rick Best and Micah Cole Fletcher were stabbed when they stood up for two young women who were being taunted and told to ‘get out of his country.’

Overcoming hate requires courage. When victims come forward to report incidents and speak to the media, the whole community depends on their bravery. This is the way we can understand the impact, scale and true toll of violence and harassment.

Those who are not the direct targets of bigotry need to do something about it. At this moment, when so many people are being attacked and harmed by hate, there has been a bold increase in upstander behavior across the country. But what happens next, after this high profile attack on the brave people of Portland who intervened? Will fear keep us from standing together?

A coworker expressed what many people may be thinking. "I would absolutely be one of those people who would stand up if I heard racist threats, but now, I’m afraid."

Facing fear is the first step in defeating it. And the fear of being the target of hate is something that so many are living with every single day.

“Communities of color experience hate in every aspect of our lives,”           -Arjun Singh Sethi, a Sikh American civil rights lawyer based in Washington DC

“It braids through our daily existence, just like friendship, work and family. We encounter it in schools, workplaces and public life. And what we fear most is hate violence, the kind that was on full display in Portland this weekend.”

The news of hate violence seems almost relentless these days. Before these killings in Oregon, we learned about Richard Collins III, a Black student who was murdered in College Park, MD, and Indian engineer Srinivas Kochibotla who was shot  to death in Olathe, Kansas by a man who told him to go back to his country. These are the deadliest occurrences; the attacks that make national news, but hate crimes are so vastly underreported that the official statistics present a distorted view of the scale of these attacks. How many hate victims remain silent because of fear? We have no idea, and that’s part of the problem.

Hate crime laws were created to recognize that attacks on people based on their appearance or identity, not only harm the victims but are aimed to instill fear in the entire targeted group. The killer in Portland, arrested shortly after the killings, was clear about his white supremacist agenda and the result he hoped to achieve. His actions were ideologically motivated, racist violence. “You call it terrorism, I call it patriotism,” he said as he was being arraigned for murder. Terrorism is defined as:1.the use of violence and threats to intimidate or coerce, especially for political purposes. 2.the state of fear and submission produced by terrorism or terrorization.

THE PAST AND NOW

Today’s white supremacist movement regularly uses the Internet to create psychological terror against their enemies. It is meant to immobilize. Fear is a powerful method of control. Nazi thugs began their campaign of terror, targeting Jewish people, but also, early in their official role, they focused on all who stood with the Jews and stood in their way. Six million Jewish people would ultimately be murdered. At Dachau, the first Nazi concentration camp just outside of Munich, their methods of spreading fear were on display for all to see. Political prisoners - activists and faith leaders who were critics of the Nazis were incarcerated at Dachau. Letters would go out to the prisoners' loved ones and friends, telling them that if they wanted to keep their family members safe in the camp, they had to remain silent. Eventually, many of those who stood up were killed along with the Jewish, Roma, and gay people who were incarcerated at Dachau.

Shortly after the 2016 election, Storm Watch, a white nationalist website, launched a series of posts urging people to go after Jewish residents and leaders in Whitefish, Montana. Richard Spencer, a leading voice of the white nationalist movement who lives part time in Whitefish with his mother, had some disagreements with some members of the Jewish community and with an anti-hate group, Love Lives Here. Storm Watch announced they would hold an armed march through the town of Whitefish. White supremacists encouraged online attacks on Jewish residents. The cyberstalking was ugly and personal, providing addresses of Jewish residents, their family members and workplace locations.

This was a pivotal moment in the post election atmosphere when hate groups were emboldened and incidents escalating quickly. Would fear keep people who were receiving violent threats from standing up? Would neighbors stand with them?

Statewide elected leaders, local media and community groups were called upon to stand with Jewish residents, and the actions of these leaders, in response to the call, was swift and clear, and an armed march by hate groups through downtown Whitefish was called off. Two hundred people gathered in sub zero weather to stand with the Jewish community. They had a clear message: Fear will not stop them, and they want their neighbors to know, we have your back.

We saw the same thing in Oregon. Hundreds of residents gathered at the train station for a vigil after this horrible attack. Asian Pacific Action Network enlisted the support of nearly 200 community leaders across Oregon,urging people to action. 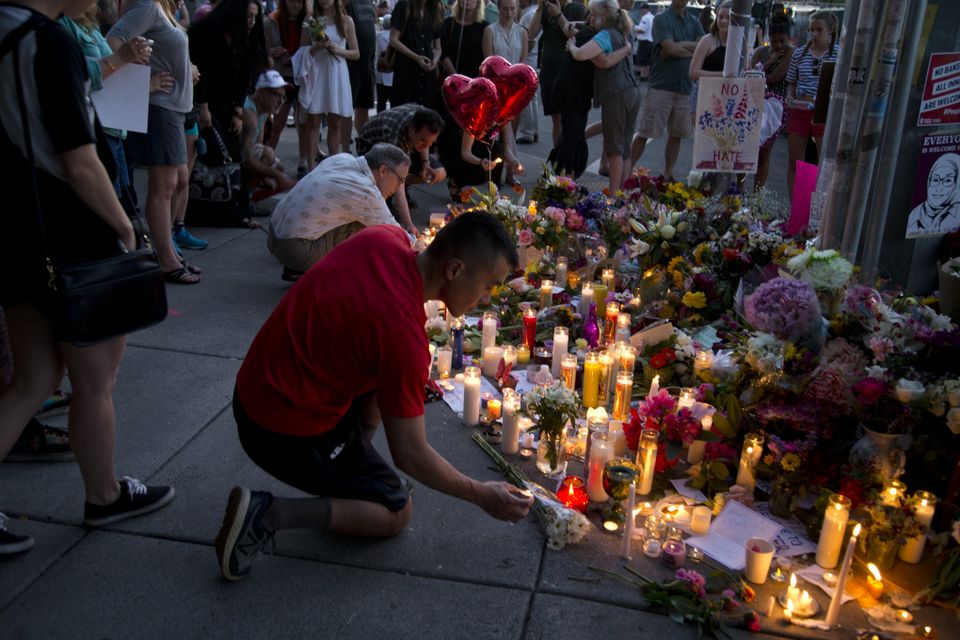 People came out in response to the killings, but how will we stand up for each other in the face of the next threat?  These are the questions we need to keep asking ourselves. If we don’t face our fears and deepen our commitment to standing up, the “terrorists” are succeeding.

If I were a family member of one of the men who was killed, I believe I would be comforted by Talesian Meche’s last words. He wasn’t afraid and he had love in his heart to overcome hate. I hope we can carry the words of a brave man into the world as we face our fears, and work together to stop hate.

This is the first in a series of Not In Our Town stories about facing fear. Coming up, advice from law enforcement, anti-violence experts and activists on safety, reflections from targets of hate on why they came forward to report hate incidents, and lessons from communities who held together.  when solidarity actions seemed dangerous.

What Happened On The Train?

The incident started on a train in Portland when a man was harassing two teenage girls with racist taunts, one of whom was a Muslim wearing a hijab. "He told us to go back to Saudi Arabia and he told us we shouldn't be here, to get out of his country," Destinee Mangum, one of the girls who was harrassed told KPTV. "He was just telling us that we basically weren't anything, and that we should just kill ourselves."

Two people who bravely stood up in the face of hate lost their lives, and a third was seriously injured. Taliesin Meche was 23 and working as a consultant for an environmental firm. Rick Best, 53, was a father of four who had served in Afghanistan and Iraq and worked for the City of Portland. Micah David-Cole Fletcher, 21, a recent graduate of Reed College who also stepped in, survived the attack because the knife barely missed his jugular vein.

As these men came forward, the perpetrator brandished a knife and slashed their throats. The description of how they were killed is shocking, but we have to face the horror of hate violence - and the fear that many Americans carry with them. Fletcher urged people not to focus on him, but on the girls who were targeted by hate in the first place.