Interview: Soledad High's Not In Our School Club | Not in Our Town
Skip to main content

Interview: Soledad High's Not In Our School Club

Soledad High School in Soledad, CA is in its second year of implementing its Not In Our School campaign. We are happy to give the first NIOS club seniors “Not In Our School” sashes to proudly wear at their graduation ceremony.

NIOS Director Becki Cohn-Vargas recently interviewed NIOS Club members Alex, Robert, Daisy and Ivan. In this interview, these students share how taking a leadership stance against bullying on their campus has helped them grow personally and what they have learned since starting a NIOS club. 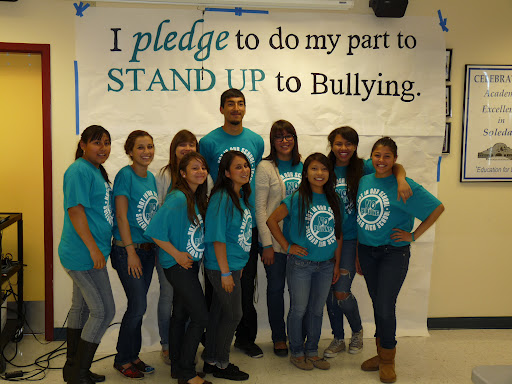 Becki: When you guys started the cyberbullying club, you gathered some data. What did you find out?

Alex: What we found out was it seemed like people were more willing to allow bullying to happen, people just didn’t care. It’s funny, people often say that they will stand up to others, and they won’t let anyone encroach on their territory, but from what we saw through the surveys is that people just don’t care. They’ll let other people get shoved.

I think that people in general are just afraid of being judged. I think that was a risk when starting this club. It’s not a very popular club on campus, we barely have enough members as it is. A lot of it has to do with having the courage to say that you are against something that is totally accepted. Bullying is as common as texting in our school.

Becki: How do you feel by sticking your neck out like that? What kind of risks have you taken, and what has the result been for you personally? Has it actually made you stronger, has it made you less shy? By being part of this club, how has it affected your life?

Becki: So you’re saying people sort of tease you and they say “Hey N-I-O-S” ?

Robert: In a sense, but it’s also just changed my life in that I have to act in a different manner now.

Becki: Now you’re saying that you’re held in a different light, people are looking to you as a leader? 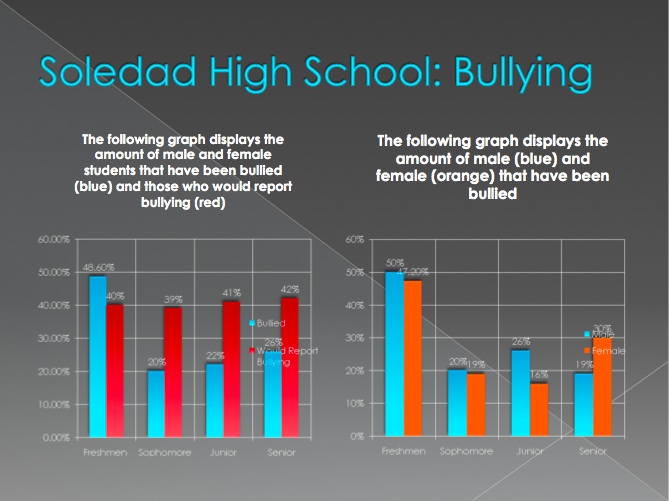 Becki: So you’ve been teased, and they say “Hey N-I-O-S.” But what is something that shows that they respect you?

Robert: Just the way people talk to me now. You can tell people try to speak to you better. I’m not really sure how to say it. The way people interact with you is different. People when they talk to you think that anything you say can be turned against you.

Becki: It’s almost like they’re a little bit in awe of you, because if they make like a joke that’s racist, you stand for something.

Robert: Yeah, so when they say something like that, they maybe act in a different manner than if I wasn’t in the room, because I’m the “N-I-O-S.”

Alex: Back to what you said about being the “N-I-O-S” and how it changed you, well what it really has changed about us is that we’re held at a higher standard now. We have a reputation to be maintained, and if we were to cause a rise in any way shape or form, it would make us look like hypocrites. It’s not just that we have to keep the courage to stand up for something we believe is bigger than ourselves, it’s also that we’re walking on very thin ice. It’s almost like being a celebrity. I’m not saying we’re celebrities, but celebrities, they got to maintain this very family-friendly image, you know? Or people will look at them with disgust.

Earlier this year, I got involved in this scandal between a girl and I was partly to blame for it. I was supported by others, who support my club and my side of the story. I think definitely being part of the N-I-O-S then and being this anti-bullying crusader sort of person now, it really is tougher. Because not only do your peers look at you like you got to be a Batman-esque character, teachers also look at you like you got to be the champion for the students.

Becki: Have you had kids come to you with bullying issues? Do they come with their problems?

Alex: In a lot of cases it is asking for advice, like, “Oh, someone was telling me this online, what do you think I should do?” Just very little stuff like that, nothing too extreme.

Becki: Okay, let’s talk about some of the things you’ve done.

Daisy: In September 2012, we had an anti-bully pledge during lunch in our ampitheatre and people came and signed this banner and posters to pledge against bullying. We also had a parent night where they also did the same thing we did, and we showed the video.

Becki: And you also did a survey, didn’t you collect data this year and last year?

Daisy: We did two surveys. We did a survey last year and one this year that was more specific.

Becki: How many responses did you get?

Becki: Okay. You also said that the students were more willing to stand up, can you tell me more about that?

Becki: Do you think also from just looking around on campus the fights and the bullying has gone down?

Robert: Yeah, there weren’t that many fights here or like incidents of that sort. This year there has been, like one big thing, maybe one or two.

Daisy: The number of physical fights and big incidents have decreased.

Becki: Can you just remind me what you did last year? 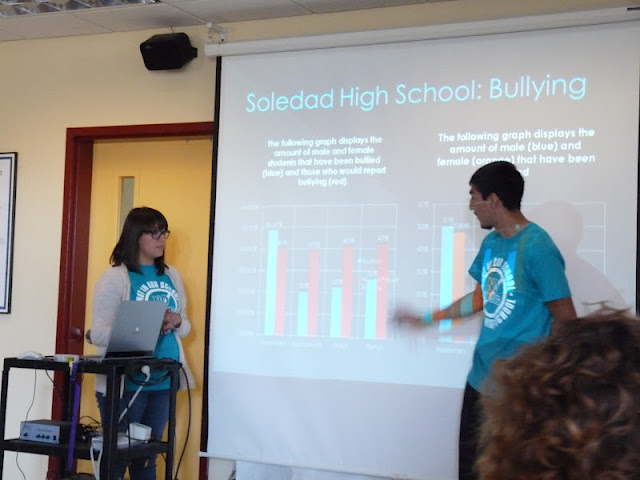 Daisy: Last year, the club headed to where it is now. This year, we merged NIOS with a club. The NIOS component really just came from me and Laura. I developed the PowerPoint for the curriculum that was implemented for a week long. It was kind of like a “Red Ribbon” week, except it was anti-bullying week. Teachers purchased NIOS T-shirts and they wore the T-shirts all week long and did PowerPoint presentations with the video, and we had activities like collaging kind of like in Class Actions.

We were able to do that for our art fair last year, so all parents that came to the art fair will view all the collages our students had done that year for intolerance. We’re planning on doing the same week of awareness. I’ll be doing more curriculum building aside from what the club is doing. We’re going to have the assembly this semester, and we’re still doing recruiting, and we’re still planning on the collaboration with Main Street.

Becki: And you went to the school board, right?

Daisy: The school board wanted to know what does NIOS do at the school site. They were intrigued by the whole campaign from last year and wanted to know if it was still current this year. So they presented their club, and did a PowerPoint presentation, similar to the one for parents, but it really just stated the facts, and what it is that the club is doing.

Alex: We have a lot of things planned this year. We’re planning on going over to elementary schools and middle schools to expand.

Becki: What would you say to kids at other schools?

Alex: I think it’s pretty simple. You may be judged, but I think it’s worth taking a chance. I guess, well this comes from one of my favorite movies, but just kind of rephrasing it, what chance do people have when the good people do nothing? I think of ourselves as good people, I mean, in that way, not trying to sound narcissistic, but people will see what we’re doing and the initiative that we’ve taken and that will hopefully inspire others.

Becki: I think you already are inspiring others. I don’t know if Ms. Chavez told you, but your former principal, Mr. Muma, is in a different district. I had already talked to that district about NIOS but they weren’t ready, and now that Mr. Muma came, now they are. So that’s already inspiring the students in other schools!

Learn how to create a NIOS campaign on your campus and how to start a NIOS club.

Where can I find the video for the Soledad Elementary 2018?

Take a look at our Youtube channel where we post all the videos we make for Not In Our School.