Inspired by Documentaries, NY Painter Uses Art to Change Conversation on Immigrants | Not in Our Town
Skip to main content

“As I watched this documentary unfold I found myself riveted to the screen. It deals with social issues that I hold dear, specifically how central a community can be for making changes. It restored a feeling of optimism in me to see how a community coming together can turn a frightful act into a hopeful new beginning.” — Berenice Pliskin, Artist

“The film awakened in me some of my own feelings of injustice. By painting both sides of the conflict as I understood it, I was attempting to provoke reactions from the viewers," she said. “When visitors to my studio saw the painting, it gave them the license to share their own experiences with me.”
Pliskin believes that art, like documentaries such as Farmingville and Not In Our Town: Light in the Darkness, is an effective medium to help change minds. 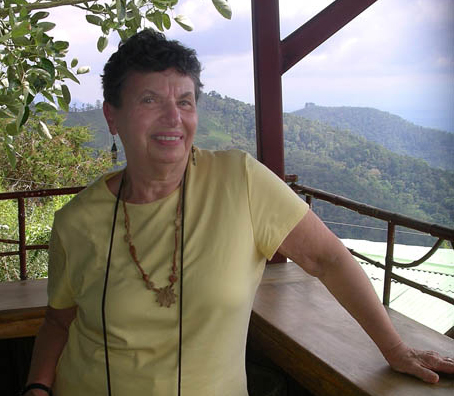 Berenice Pliskin's "Latino Day Laborer" Series
was exhibited in the Katonah Museum of Art in
conjunction with a conference on Immigration in
2007. The 79-year-old artist lives in White Plains,
NY with her husband.
Recently, the 79-year-old artist connected with Not In Our Town after viewing Not In Our Town: Light in the Darkness on public television with her husband. Pliskin was familiar with the 2008 killing of Marcelo Lucero in Patchogue, and had long noticed a growing turmoil in her own community regarding the often divisive issue of immigration.
“As I watched this documentary unfold I found myself riveted to the screen. It deals with social issues that I hold dear, specifically how central a community can be for making changes,” she said. “It restored a feeling of optimism in me to see how a community coming together can turn a frightful act into a hopeful new beginning.”
While Pliskin said she has always been interested in different cultures and social causes, she began incorporating these elements in her art after witnessing tensions in her town and surrounding communities.
Beginning in 2005, the themes in Farmingville gave her the inspiration to paint about an issue in her Westchester County community that would become a theme of her art for many years.
While running errands, she often noticed a group of men regularly congregating on certain street corners.
“I was inspired by the men’s body language, their clothing, the way they gathered in small groups, and their persistence in remaining outside in the face of all weather conditions,” said Pliskin.
The men who had suddenly become a source for Pliskin’s inspiration were Latino day laborers.
Art as Connection
Visually and emotionally moved by the day laborers, Pliskin began a series of fine art paintings on her signature silk fabrics, depicting the men and women in their daily struggles and successes.
“Day laborers, by the very nature of their work, are totally visible to the general public,” said Pliskin. On her website, she once wrote that “by using this medium, I feel that I am showing respect to my subjects.” 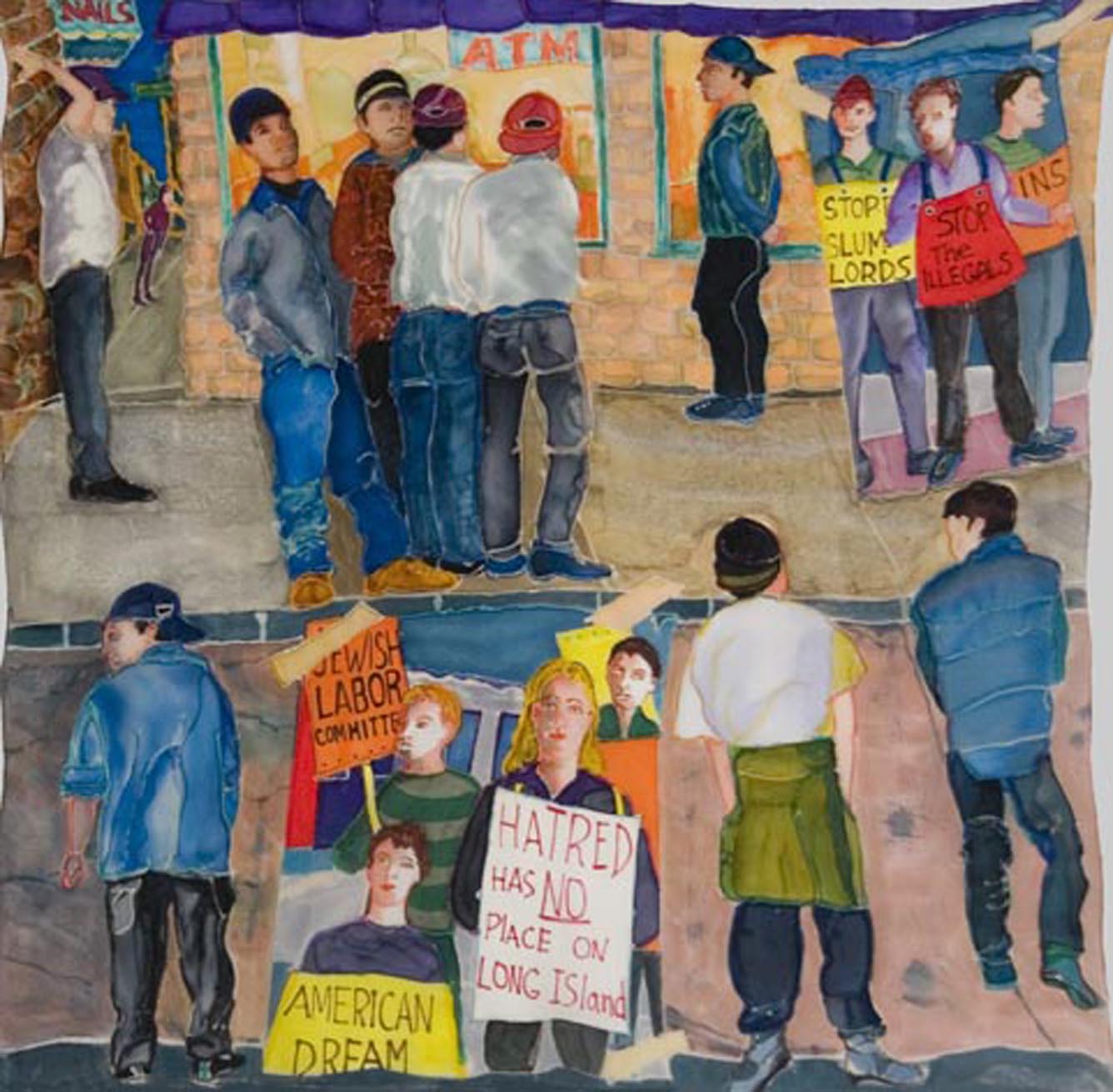 Pliskin's painting, "Day Laborers and Protestors,"
captures the scene of a demonstration in Long Island.
But for Pliskin, simply drawing her subjects was not enough. She felt an urge to connect with them, to learn their stories and to share them with her community.
“Soon after I completed sketches and two paintings, I realized that what I needed was direct contact with them,” said Pliskin. “I didn’t feel that I should paint people who were a mystery to me.”
In a conscious effort to become involved with the community of day laborers in Westchester County, Pliskin started volunteering at Neighbor's Link, a non-profit that works toward immigrant integration, located in Mt. Kisco, N.Y.
With a mission of meeting the needs of a Latino immigrant community that makes up 26 percent of Mt. Kisco’s population, Neighbor’s Link was formed when a group of concerned community members raised private funds to convert a masonry warehouse into a community center for low-income working people.
“During my first visit I spoke with a few men who were interested in art,” said Pliskin, who began instructing art classes for a group of men studying English at the center while waiting to be hired. “I also showed them my two completed paintings—they admired them.”
To her surprise, the demand for her art lessons exceeded her resources, and she initially had to provide some of her own materials to her students.
“It pleased me that almost all the men learning English (at the center) stayed for the art lessons,” said Pliskin, whose basic Spanish came in handy during classes.
During one lesson, Pliskin remembers asking her students to recall their homes in their native countries, an exercise which led to a personal dialogue with some of the men.
“They were very eager to talk about their home countries,” she said. “I also learned that a few of them had art training.”
While Pliskin felt inspired by her work with day laborers, there are many people in her community who did not share these sentiments.
Art as Change
Tensions surrounding the issue of immigrant day laborers in the suburbs of New York reflect a conflict that is present in most cities across the nation. 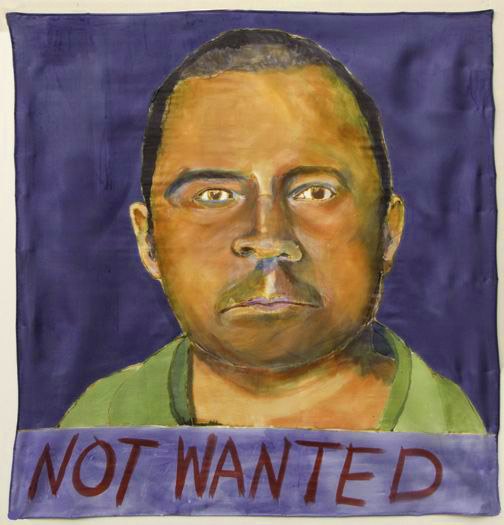 After the death of Guatemalan Immigrant
Rene Perez in 2007,Pliskin painted a portrait
in the man's memory while portraying what she
believes to be a sentiment of hostility towards
immigrants present in many communities.
In her own town, a recent motion to build a shelter for the town’s day laborers was rejected by some of the town’s residents when it came up for vote at a council meeting, she said.
Through her art, Pliskin hopes to create a dialogue and to ultimately see a change in the often disheartening working and living conditions that many day laborers in the United States face.
The Day Laborer series has proven successful in doing just that. In 2007, the paintings were exhibited in the Katonah Museum of Art in conjunction with a conference on immigration, which Pliskin said was received with much positive feedback. Two years later, the Museum chose two of Pliskin’s Day Laborer paintings for a Tri-State Exhibit called “Contemporary Confrontations.”
Furthermore, Pliskin's art was also featured in the French magazine for silk artists, Peinture sur Soie, as well as in several articles in the New York Times and The Journal News.
At home, she keeps abreast of issues relating to day laborers and immigration policy. She finds Not In Our Town’s work not only relevant to her own life, but to towns across the U.S. Her own county is populated with immigrants from Mexico, Guatemala, Ecuador and Peru. A home on her block is co-owned by a group of Latino men. She knows that many communities have similar demographics.
“In my opinion NIOT addresses the issue of community and how ignorance and hatred can find its way to greater enlightenment,” she said. “When earnest people in a community come together positive changes can result.”
For more information about Berenice Pliskin’s art, visit her website.
In:
community response
hate
Not In Our Town
immigration
art
light in the darkness

It's so cool that we could use other media to express this.

Many people would be able to express their tolerance without having to spend much of their time going out marching on the street. Art is a very good way, it will not cause trouble, it will never stop, and it will always be there.