Submitted by Laura on August 17, 2011 - 12:48pm
It is said that there is power in numbers, but when an increasing number of injustices were committed in Hayden Lake, Idaho, it was a small group of  concerned citizens that stunted the growth of an American Nazi movement.
Three decades later, the story of the campaign for human rights that brought down the Aryan Nations--a once powerful organizing force that incorporated a white supremacist ideology with a frightening mix of anti-Semitism, racism, and Christianity--is now told in a one-hour documentary, The Color of Conscience. (To watch the full-length documentary, click here.) 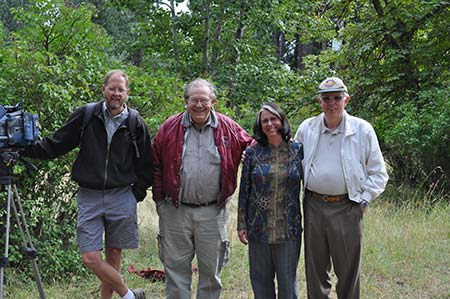 Director Jay Krajic (left) and producer Marcia Franklin pose with two of the
founding members of the Kootenai County Task Force on Human relations,
Norm Gissel and Tony Stewart (right), in 2010.
Photo source: Idaho Public Television
The powerful film chronicles the human rights movement in Idaho, starting with the formation of the Kootenai County Task Force on Human Relations, a group that began with eight ordinary citizens intent on dispelling hate from their state. The film also addresses current human rights issues in Idaho, including a burgeoning gay rights movement.
Over the span of 10 years, producer Marcia Franklin explored the movement and met with the people who dedicated their lives to making their community safe and inclusive. The result is a compelling documentary that serves as a reminder that a small group of people with the right intentions can make a great difference.
The Color of Conscience debuted on Idaho Public Television on May 25, 2011, and is a powerful example of how public media can address community concerns and help spark a dialogue about hate.
Uniting Against Hate
“They were looking for a place to go where either people would be sympathetic or apathetic,” said Tony Stewart, a Not In Our Town leader and former college professor who helped break the momentum of a violent and rapidly growing neo-Nazi movement.
That chosen place was Hayden Lake, Idaho.
The Aryan Nations established themselves in Idaho in the 1970s, where a 20-acre compound on the outskirts of Hayden Lake served as their headquarters for nearly 30 years. It was a gathering ground equipped with a church that drew hundreds of supporters for weekly sermons.
From his pulpit, Richard Butler, a native Californian, preached hate, violence and white supremacy to his religious followers as well as through his political arm, the Aryan Nations.
Founder of the Aryan Nations, Richard Butler, in 1999. Photo by Jeff T. Green,
Associated Press.
Despite the organization’s racist views, the Aryan Nation’s reach was far and wide--and Butler’s hateful preachings soon translated into a reign of terror in Northern Idaho.
At the end of 1980, two incidents took place that not only instilled fear in the Hayden Lake community, but also shifted the sense of apathy that prevailed.
First, a restaurant owner was targeted for being Jewish—his business was defaced with anti-Semitic slurs. The attack was the first documented hate crime in Hayden.
However, tensions reached a boiling point when a family with biracial children received death threats by an Aryan Nations’ member.  The incident prompted a group of alarmed residents to take action.
Stewart was among the eight activists who came forward to form one of the nation's strongest human rights groups. In 1981, they met in the basement of the First Christian Church in Cour D’Alene, Idaho, to form a support group for the Aryan Nations’ victims.
“Since I was very young I’ve always been so bothered by injustices of all types,” said Stewart in an interview with Franklin. “As a young boy ... I was writing to my Congressman asking him to vote for Civil Rights Legislation, which they they would not do.”
While organizing against the Aryan Nations’ threats, the group shared a common goal from the very beginning: to pass legislation that would deal with hate crimes.
“We felt there should be laws clearly describing hate crimes,” said Stewart. “And so in 1981, we immediately started working with the Sheriff’s Association in the state and prosecutors trying to get legislation passed.”
Since then, the Task Force has played a tremendous role in the passage of several laws to combat hate crimes in Idaho, as well as laws that promote human rights.
A Peaceful Resistance
The task force based their resistance on the strategies of Martin Luther King Jr.-- they believed in peaceful disobendience but never violence.  In fact, the Task Force never directly confronted the Aryan Nations at their marches or at the compound.
“I said if you can show us one time that Dr. King and his followers ever went to a Klan rally we’ll change strategy,” said Stewart, in response to criticism that the Task Force sometimes received from other civil rights groups over the years. “He was too intelligent to do that.” 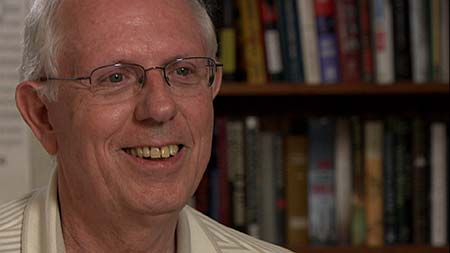 Countering hate with hate was never an option, and ultimately, it was this strategy that gave the Task Force the upper hand.

In 1998, when Butler and the Aryan Nations organized a march in Couer D'Alene, the Task Force countered by asking citizens and organizations to pledge money for every minute they walked. The successful campaign, called "Lemons to Lemonade," raised $35,000 towards human rights advocacy.

However, the true turning point for the Task Force was a lawsuit. In 2000, a jury found Butler and his group responsible for an attack on a woman and her teenage son, who were shot at by Butler’s security guards while driving past the Aryan Nations’ compound. The guards drove the family’s car into a ditch and proceeded to physically assault them.

Justice came in the form of $6.3 million verdict against the defendants, which drained the Aryan Nations’ resources and forced Butler into bankruptcy.  Frail and defeated, Butler died in 2004.
Though it started out small, the Task Force successfully set in motion a movement that demanded public awareness about human rights issues-- and continues to inspire communities battling hate to this day.