Communities Standing with Their Muslim Neighbors After Christchurch

Across the country and around the world, communities are coming together to stand with their Muslim neighbors and friends after a gunman killed 50 Muslim worshippers in two mosques on Friday. From Illinois to California to Florida, local Not In Our Town groups are part of these efforts to rebuke Islamophobia and hate, and to make their communities safer for all residents.

Here are some highlights of actions being taken around the world. 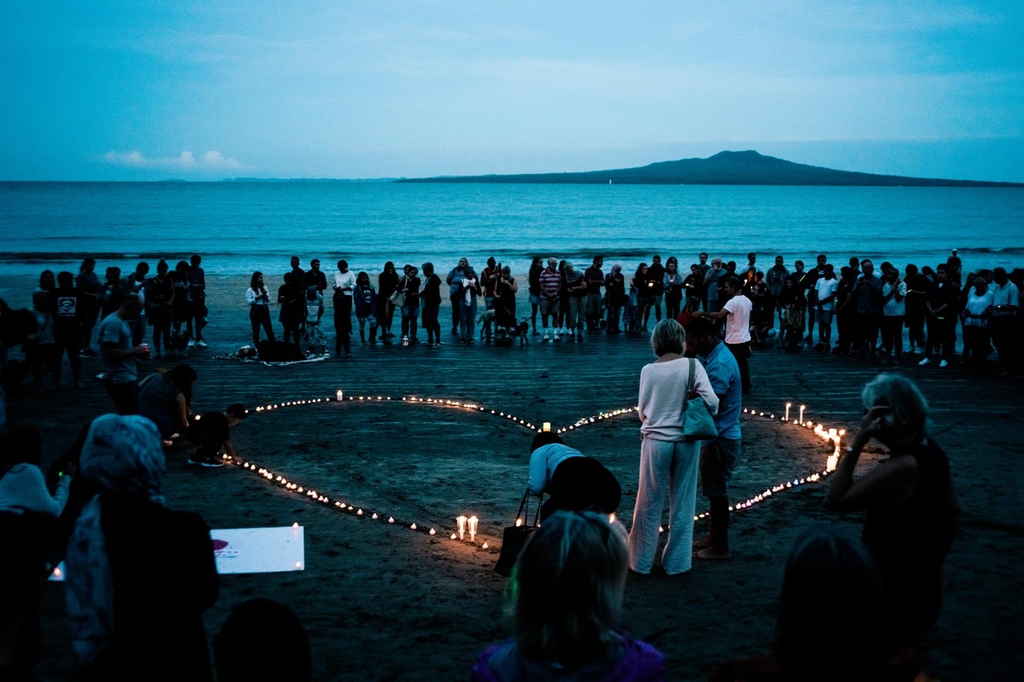 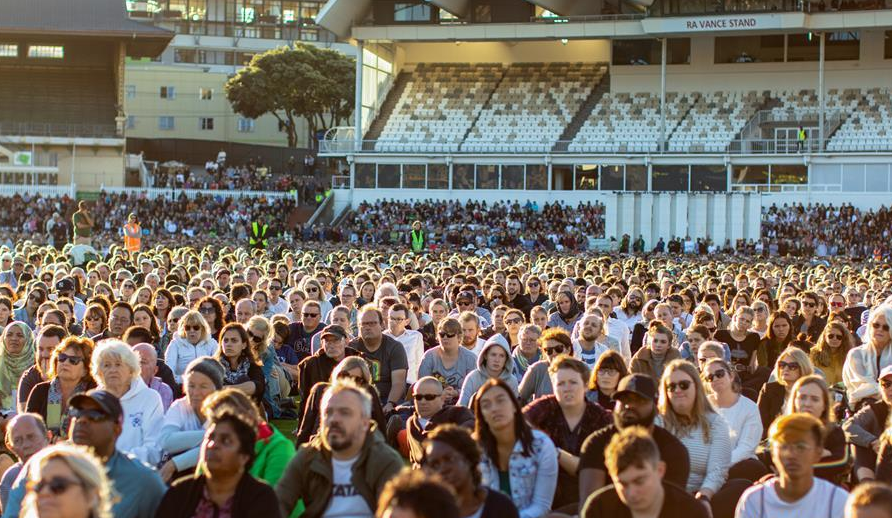 Crowds gather for a vigil on Takapuna beach Auckland. (Getty Images); People gather to mourn for the victims of the attacks on two mosques of Christchurch in Wellington, New Zealand, on March 17, 2019. (Xinhua/Zhang Jianyong) 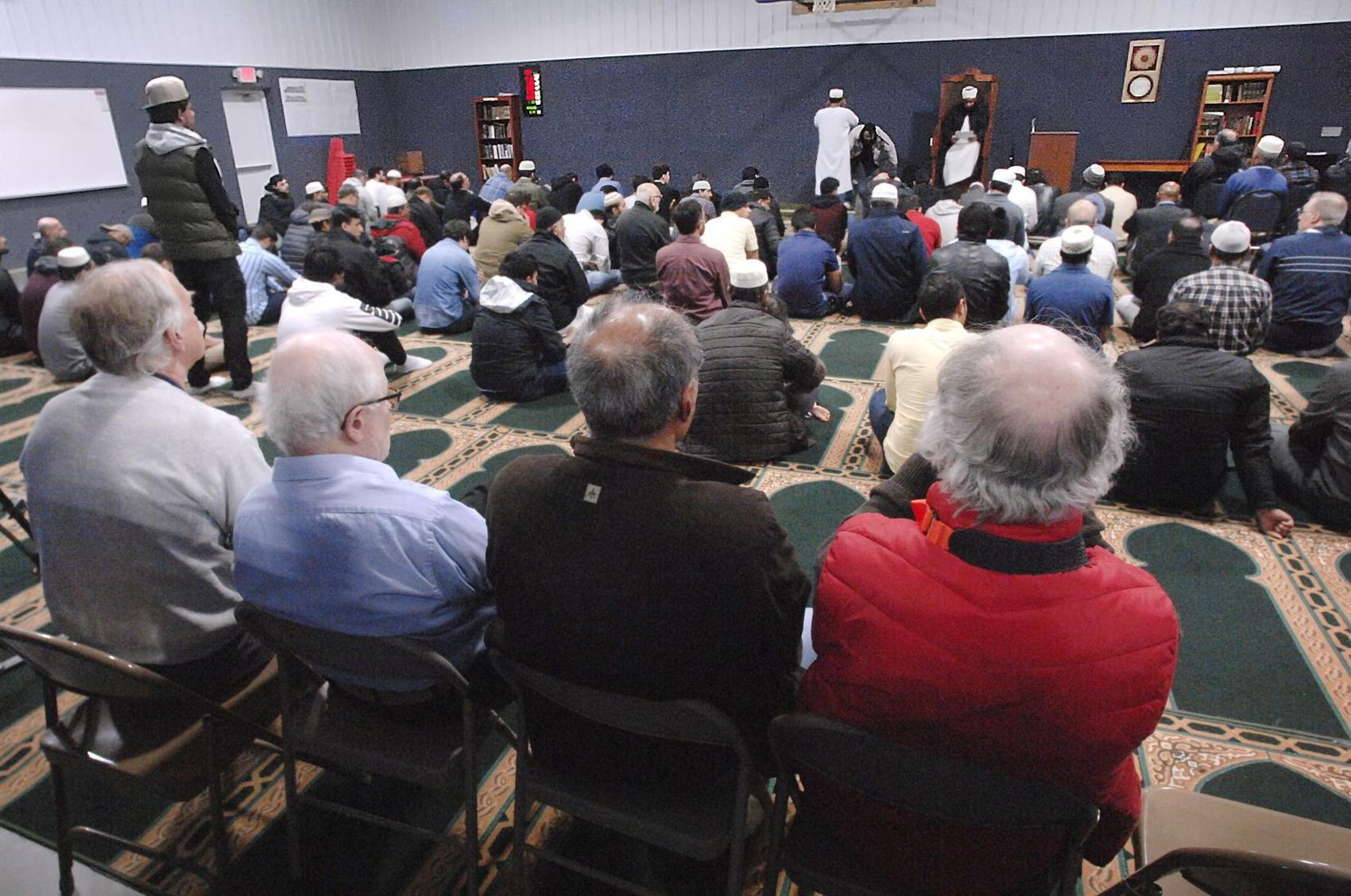 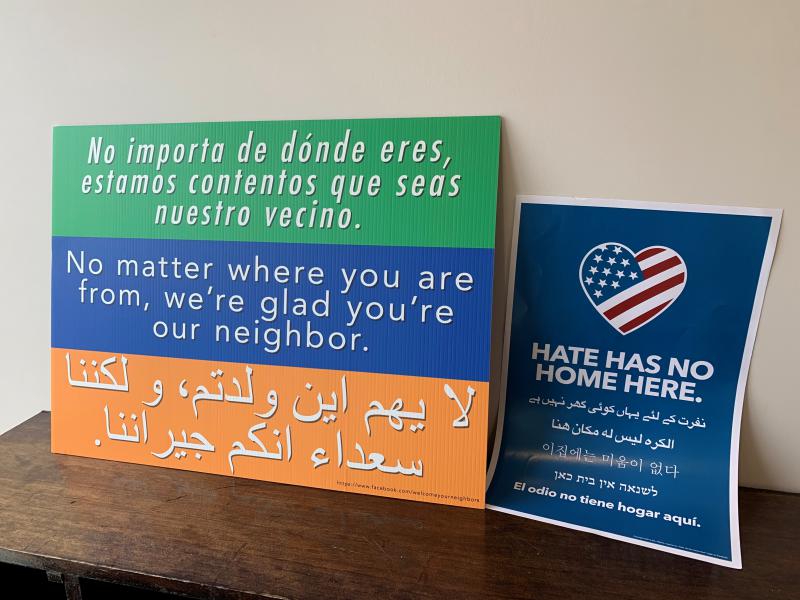 Local members of Not In Our Town sit in support of worshippers at the Islamic Center of McLean County on Friday, March 15, 2019, in Bloomington after a terrorist attack in New Zealand. (Credit: David Proeber, The Pantagraph); Not In Our Town Bloomington-Normal brought signs to Bloomington's Islamic Center of McLean County as a show of support during midday prayer on March 15, 2019.(Credit: Mary Cullen, WGLT)

Not In Our Town Bloomington-Normal wanted to show solidarity with the grieving local Muslim community, said Mike Matejka, chairman of the local movement to stop hatred, discrimination and bullying. "We decided to just put the word out to come and we were going to just stand outside and hold signs, and we were invited in to join the service," said Matejka. Mohammed Zaman said it was heartwarming to see support from so many non-Muslims. Read more at The Pantagraph. 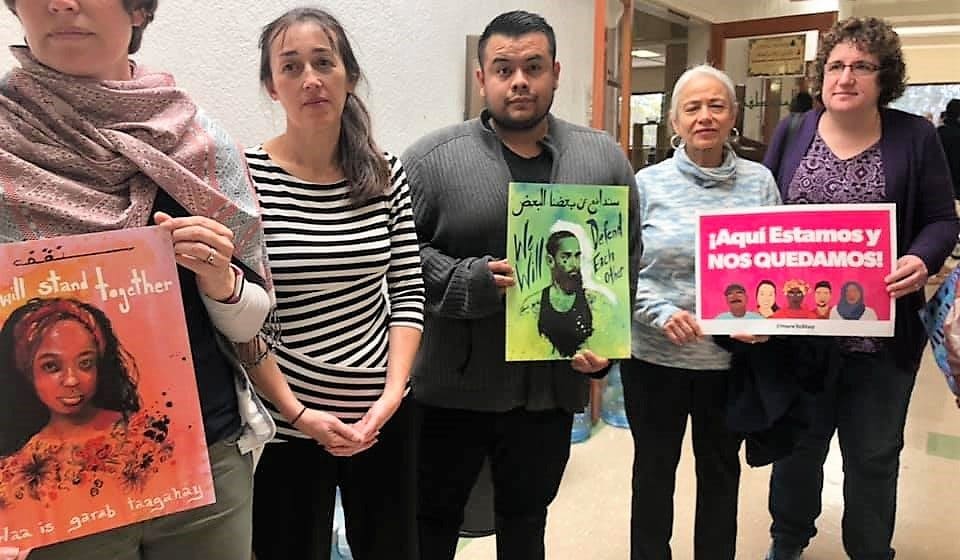 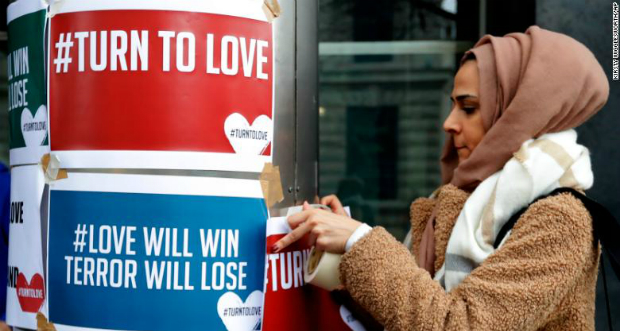 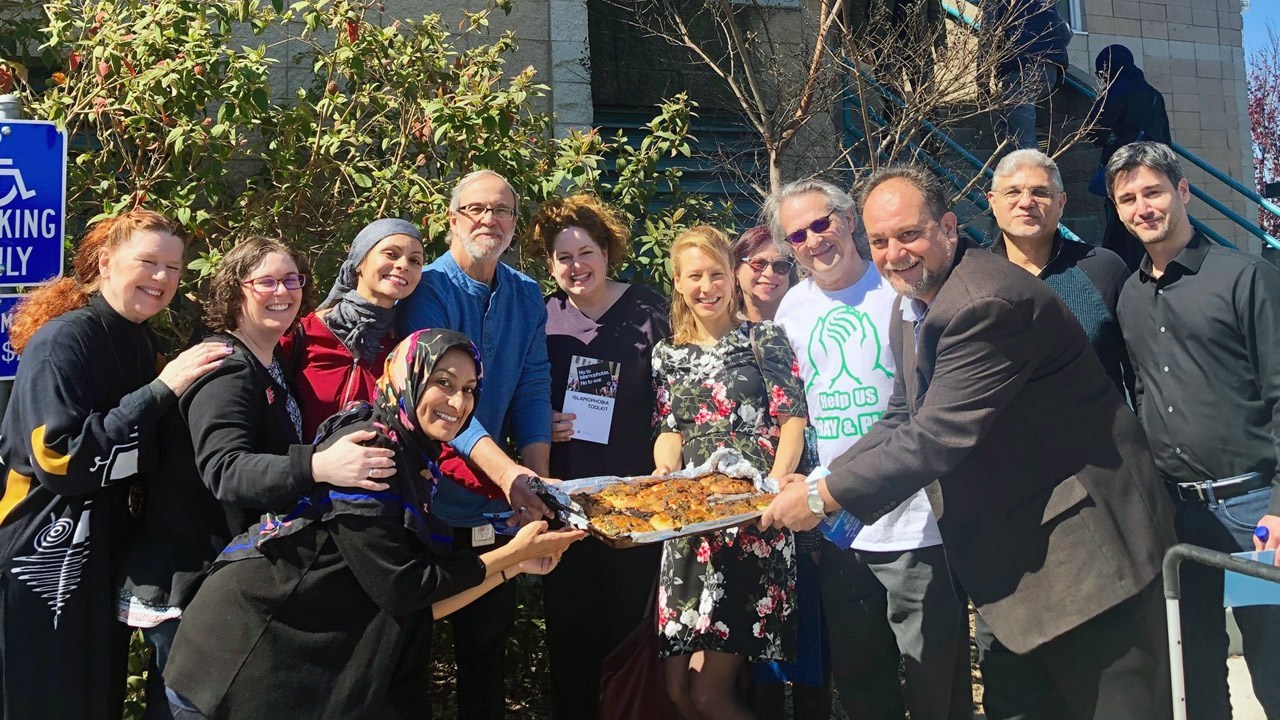 As Muslims in mosques across the Bay Area bowed their heads in prayer Friday afternoon, some were joined by non-Muslim community members who came to express their solidarity. Stepped up police presence were noticeable at many prayer congregations after the attack.

South Bay Imam Tahir Anwar also posted on Facebook inviting community members to mosques to express their support. “If you see people angry, upset or crying, please understand that this is a hard time for us. You don’t have to say anything. You are welcome to stand there. Even if it feels awkward,” he posted.

“We’ve been on the receiving end of this hatred for a long time, and we are tired. Those of you that continuously support us, thank you,” his post went on to say. Read more at San Jose Spotlight.

In the Bay Area, the Jewish Federations based in San Francisco and the East Bay, the Jewish Community Relations Council and the Anti-Defamation League expressed their horror and urged local Jews to support their Muslim neighbors and attend one of several gatherings at local mosques.

“So many Muslims came to Shabbat services after the Tree of Life shooting. So I called Fattin last night to make sure I could show up the same way," said  Stephanie Levin, chief engagement and innovation officer at PJCC. Read more at The Jewish News of Northern California. 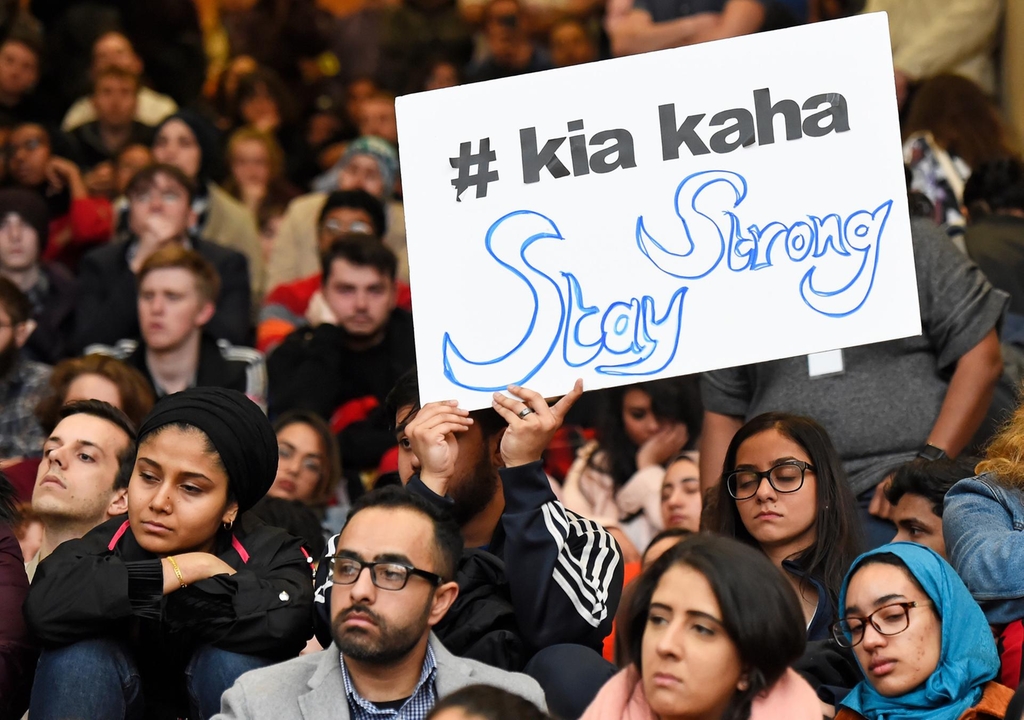 A man holds a sign at a vigil held at NYU Kimmel Center, New York. "Kia kaha" is Maori for "stay strong". (Reuters)

This Man walked into a New York Mosque with roses as an expression of sympathy for the lost life of Muslims in New Zealand. pic.twitter.com/4tZOfgkilT

There were also individual acts of kindness, like this video that went viral on Twitter in which a man leaves flowers at his local mosque.

There is a multi-denominational group that has shown up every Friday for two years showing their love and support for the Muslim community.

Marcia Peterson has been part of the group since the beginning. "When people are singled out because of the color of their skin or religion they believe, we can't stand and say nothing. We stand in support of our local community to show we care for them, we support them, we’re with them,” Peterson said.

“It gives us a lot of comfort,” mosque leader Shiraz Hassan said.

You can help the families of the victims in Christchurch, New Zealand in a variety of ways. Learn more about fundraising campaigns and other efforts. What's happening in your town? Let us know by posting a comment below or on our Facebook page. And use our resources - including two FREE films - to help organize your event.

Together we can stand against hate, and takes steps towards creating safer communities for all.