Communities Come Forward to Support Victims in California, Oregon Hate Incidents | Not in Our Town
Skip to main content 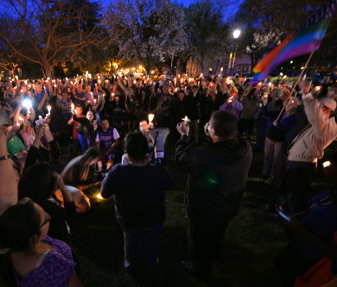 Three hundred people in Davis, CA attended a candlelit vigil on March 16 for Mikey Partida, a Davis resident who was badly beaten earlier this month in what police are investigating as a hate crime.

Partida, 31, was leaving a birthday party when a neighbor attacked him while allegedly shouting gay slurs, according to Davis Patch. He sustained severe facial injuries, a fractured skull and neurological trauma, and had to be hospitalized. A Facebook page launched by Mikey’s family to support him and raise money for the costs of his treatment describes Mikey as “the most gentle, nonviolent person in the world”. A 19-year-old man has been arrested and charged with commiting the hate crime.
Hate Incident at Salem, OR Hospital 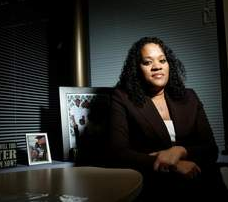 A human resources manager at a Salem, OR hospital was the target of a hate incident in January. Dau Tucker, who is part Vietnamese and part African-American, came into work on Martin Luther King Jr. Day to find a bullet placed on her desk and a threatening and racist message scrawled on her office wall.
According to Statesman Journal, Tucker and her family have been the targets of hate speech and discrimination on many occasions since they moved to Salem. Hospital CEO Norm Gruber released a statement of support after the incident, stating that he is outraged by the threat, and that such a hateful act is “everybody’s problem.”

Though she feels intimidated and unsafe, Tucker has said that she will not quit her job or move to another town, but stay in Salem to be part of the solution. Statesman Journal reports that police believe the perpetrator of the attack is a hospital employee, and are investigating.

Trinity Episcopal Church in Bend, OR has suffered $2 million in damages after it was set alight on March 6, according to Oregon Life. The arsonist responsible is also believed to have set fire to other buildings and two vehicles on the same night.

The church hosted a rally supporting the ‘March for One Oregon,’ a bus tour of Central and Eastern areas of Oregon to meet with farmworkers and advocate for immigration reform. The marchers released a statement of support for the church, “We are determined to ensure that a stronger and better Oregon community arises from this tragedy.” A vigil was held the night they returned and many spoke out against the damage done to the church.
KTVZ reports that while damage to the church was extensive, most of its sacred objects including the organ and Priest’s vestments are salvageable.
Kentucky proposes bill that would allow LGBT discrimination 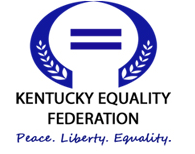 Gay rights groups are concerned about a bill that could effectively allow discrimination against LGBT people in Kentucky. House Bill 279, soon to pass through state legislature, would allow individuals to “ignore state regulations or laws that contradict his or her ‘sincerely held’ religious beliefs,” according to Alternet. Opponents say that the bill, which ostensibly protects religious freedom, would expose LGBT people in Kentucky to greater discrimination.

“House Bill 279 represents a clear and present danger to the gay and lesbian community and other minority groups,” wrote the Kentucky Equality Federation to the senator who introduced the bill.