After Charleston: What We Can Do to Stop Hate Together | Not in Our Town
Skip to main content

After Charleston: What We Can Do to Stop Hate Together

We will have to repent in this generation not merely for the hateful words and actions of the bad people but for the appalling silence of the good people. 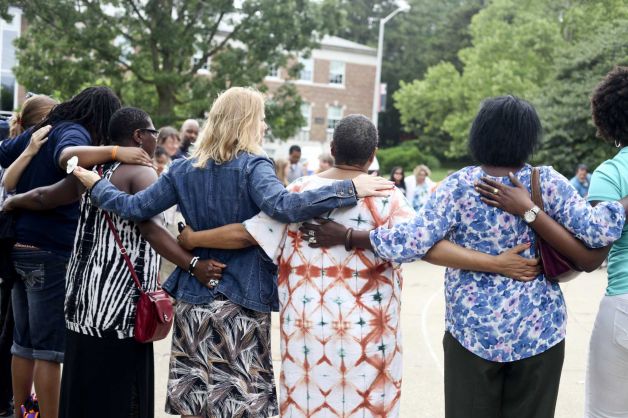 Source: Kalamazoo Gazette. Kalamazoo residents gather at the Light Fine Arts building on Kalamazoo College campus to participate in a vigil to mourn the lives lost at the shooting in Charleston, S.C., Thursday, June 18, 2015, in Kalamazoo, MI. Dylann Storm Roof, 21, was arrested Thursday in the slayings of several people, including the pastor at a prayer meeting inside a historic black church. Photo by Daytona Niles, AP / The Kalamazoo Gazette.

Action Steps from Not In Our Town 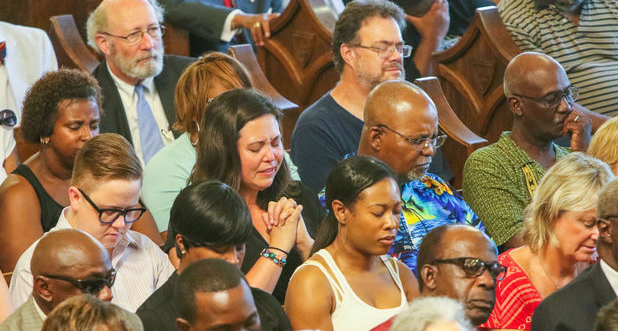 A prayer vigil is held at Morris Brown AME Church for the nine
people who were killed by a gunman in Emanuel AME Church
on June 18, 2015 in Charleston, S.C.
Photo by Tim Dominick/The State/TNS

On June 17, nine people lost their lives at a Bible study inside Charleston, SC’s historic "Mother Emanuel" AME Church, at the hands of a 21-year-old man, poisoned by racism and hate. People grieving and filled with outrage are asking: What can we do? The most effective way to respond to the hate attack in Charleston is to take action locally.

Over the last 20 years, Not In Our Town, a movement of people across the country working to stop hate and bullying, has learned one indisputable thing: The solutions to hate violence and bigotry require each of us to participate.

Here are three ways you can take immediate action and stand up to hate:

Inspiration from the NIOT Network

As you plan your actions to honor the victims of hate and violence in Charleston, here are a few examples of what others are doing around the country:

What will you do in your town to say, “No hate, no fear, no violence. Not In Our Town.”? 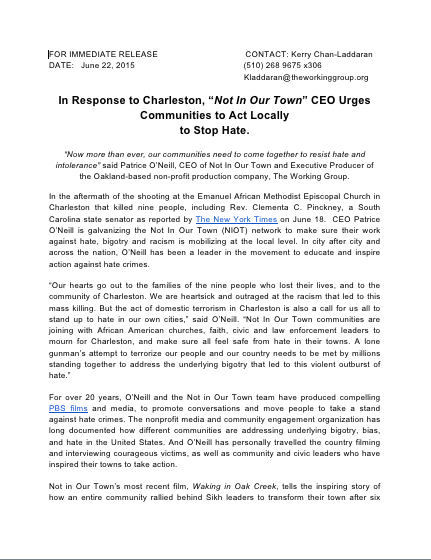 The racist church attack in Charleston was meant to shock and intimidate all of us who believe in equality and respect for all. Our responsibility as part of Not In Our Town is to fight hate and stand up for a safe, inclusive community.

We will be doing exactly that on Wednesday, June 24, from 8 PM to 9 PM at Mt. Pisgah Baptist Church, 801 West Market Street, in Bloomington. We invite you to join us for our Vigil Prayer Service to lift up the families in Charleston, the community, and the nation with prayer and reflection.

Please be part of Bloominton-Normal’s affirmation of the principles on which our nation, our community, and humanity itself are based.

As he greeted the multitude

Sent from NIOT Bloomington-Normal, IL after their Prayer Vigil on 6/24

As he greeted the multitude of people from an array of faiths and cultures, Charles observed a rainbow sent by God giving His approval of the Prayer Vigil! It was raining but that did not hinder people from coming with umbrellas and holding each other up as they entered Mt Pisgah with the NIOT sign on the window of the door!

Thanks all...NIOT made a difference once again. People kept coming and coming. Our children and youth said a prayer for each victim that was killed at the Emanuel Church and lit a candle in memory and love.

Others left their handprints and wrote messages on a paper roll to the families in Charleston. We should make a banner of the paper message roll as a reminder of this day...a coming together.

Praises went up as we sang Lift Every Voice and We Need You to Survive. The chief of the Bloomington Police Dept talked about helping each other out and not standing for violence. Pastor Frank L. McSwain spoke about the power of 'united we stand.'

At the end, we built a unity circle of people around the inner walls of the church and Rev. Kelley Becker prayed. All of this, and much more than words could express, occurred within the one hour prayer vigil!

So many people came up to me and shared what a healing this was for them...

We collected over $1400 to send to the families of the victims. Hate was defeated by love tonight.  The vision came alive! Just look at the rainbow of hope- equality is possible!

Charles showed me the rainbow that stood over the church as we began the prayer vigil and I had to share. 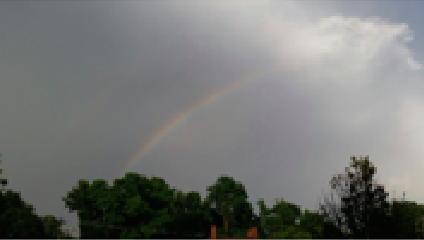 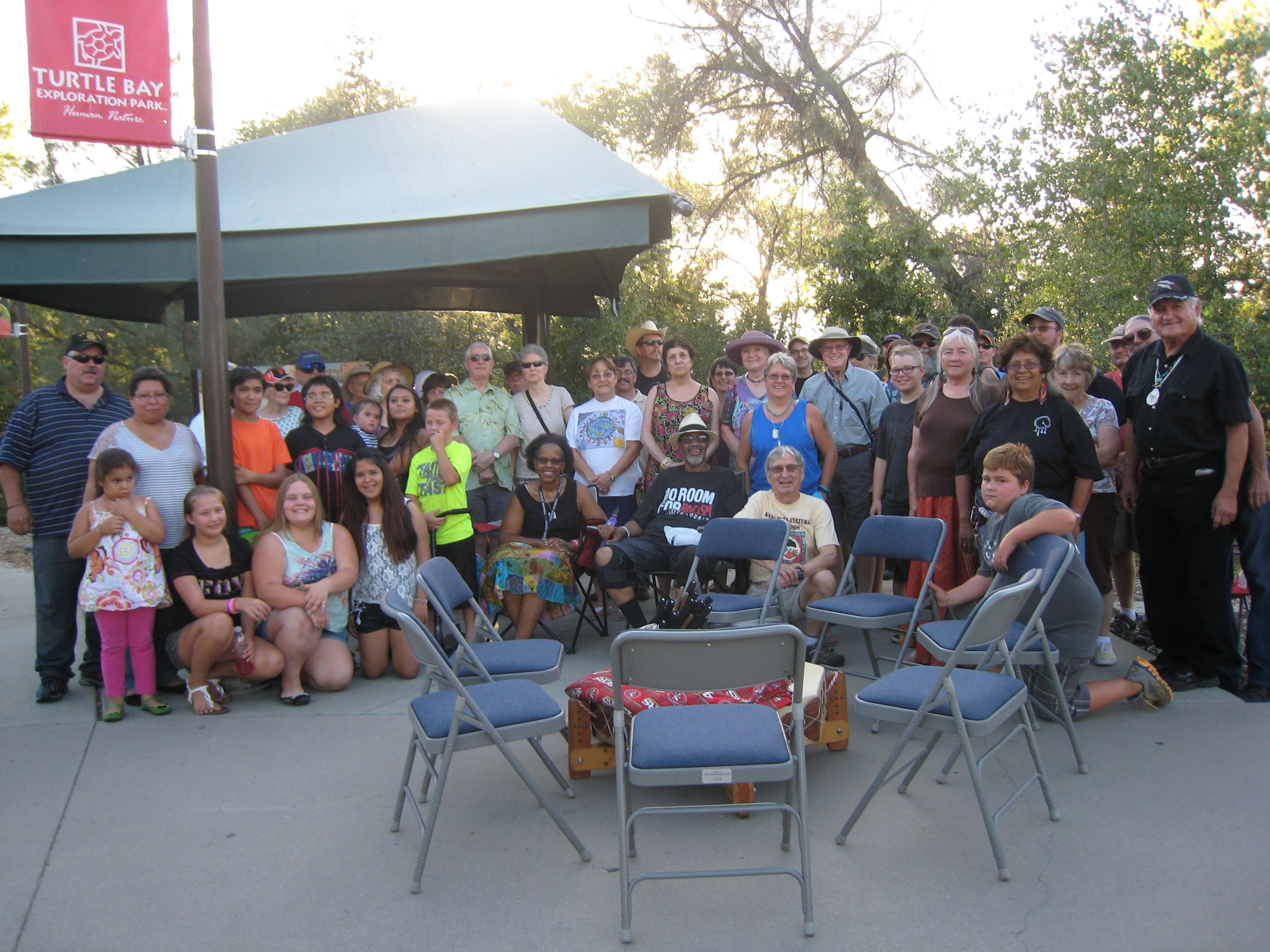 The Not In Our Town group in Redding, CA, Shasta County Citizens Advocating Respect, participated in a vigil with allied organization Shasta County Interfaith Forum to recognize those lost in the hate crime killing at a church in Charleston, SC.

“The enemy is trying to keep us from loving one another,” said Celeste McAllister told the local paper. “There’s nothing you can change about your race. You can’t be taller, you can’t be shorter, you can’t be anything other than what God made you to be.”

Read more about the vigil at the Record Searchlight.

The killing of nine churchgoers in Charleston, S.C. on the night of June 17, and the social discussion thereafter, has shocked and engaged the country.

Men, women and children from the Marshalltown area gathered, sang, cried and celebrated the memory of the nine victims at Trinity Lutheran Church in Marshalltown Wednesday night.

"We are all God's children," said Gregory Davison, pastor of Trinity, adding "so we are all brothers and sisters."

"Everyone as individuals, and everyone in our society today... has heartbreak in their lives," Cooley said. His message was to lift oneself up when life becomes difficult. The main message of his sermon seemed to be that hate cannot triumph over love.

Each victim had a small candle lit and placed on a wooden cross in their memory. After their presentation, the shooter, Dillon Storm Roof, was recognized. The pastors said they wanted him to be forgiven and "find the light of god," as Davison said.

Many of the people in the pews discussed their opinions on the events in Charleston, and why, in their minds, vigils such as the one on Wednesday were important.

"This is about bringing all people together, all races, all denominations together for one cause," said Kirk Brooks, one audience member. The woman next to Brooks, Linda Borsch, added racism is still an issue in the U.S. today.

"It's important because people need to know and understand that racism still exists," Borsch said.

The audience members were free to go up to the cross with candles, light a candle, and have a personal prayer at the cross. Every member of the audience participated. A communion was also held.

"We welcome everyone here," said Davison, adding "anyone willing can participate in this communion."

Gayle Strickler, another onlooker, also had strong feelings about the shooting and its aftermath.

"I grew up in Urbandale," Strickler said. He went down to North Carolina do to work, and was shocked by the some of the differences he saw in the communities there.

"I worked in an integrated workplace, before the Civil Rights Act passed," he said, "and a lot of people down there did not like integration. I was shocked when I saw signs that said 'black only' or 'white only.'

"We have a long ways to go, but I hope something good comes out of the discussion after this tragedy," Stickler said.

The vigil was dedicated to the memories of those who died, and the message of "love over hate" was delivered by the pastors.

"I know this is a serious time," Cooley said. "But this should also be a time to celebrate those who've gone on."

Last week Not In Our Town organized a community wide prayer vigil at Mt. Pisgah Baptist Church for the nine people killed at the Mother Immanuel AME Church in Charleston, South Carolina. Around 300 people attended a truly ecumenical service. Everyone came to reflect, pray, and stand united against hate.

Rev. Frank McSwain, from Mt. Pisgah, and Pastor Kelley Becker, from First Christian Church, touched the crowd with their words. Rev. McSwain repeated several times, “together we stand, divided we fall,” and explored what happens when people come together or find ways to separate themselves. He noted that people/experiences have made “deposits into our thinking” during our lives, and over time this has contributed to the people we’ve become.

My thoughts went to the accused gunman, Dylan Roof, and I wondered what people/experiences made deposits into his thinking over the 21 years of his life. I flash backed to two visits I made to South Carolina.

On my first visit to Charleston, my ex-husband and I were “greeted” by white hotel staff in the parking lot when we pulled up in our new 1984 Chevy conversion van.The staff wanted to know who we were delivering the vehicle for. We had no idea what they were talking about and only wanted to check-in and go to sleep. They were angered when we insisted it was ours and demanded to see our license,insurance, and registration. After seeing the items, they grumbled, and we followed them reluctantly inside thinking, “Can’tblack people own a van?” We had to stay, because it was a two week Naval Reserve assignment, and the hotel was already paid for.

I remarried twenty- one years ago. While on my honeymoon,we drove from Florida to Washington, DC.and stopped at a secluded rest stop in South Carolina. We got out; noticing the van next to us had a large Confederate flag covering the window with a sign saying, “Save the land, join the Klan!”I didn’t want either of us to go into the restroom unsure of who/what we would face.

Those are just two deposits that have fueled my life’s quest for equality and respect. Not In Our Town’s mission is to have a safe, inclusive community.

Last week’s vigil is another example toward that goal. Dr. Martin Luther King Jr. said, “…Hate cannot drive out hate, only love can do that.”