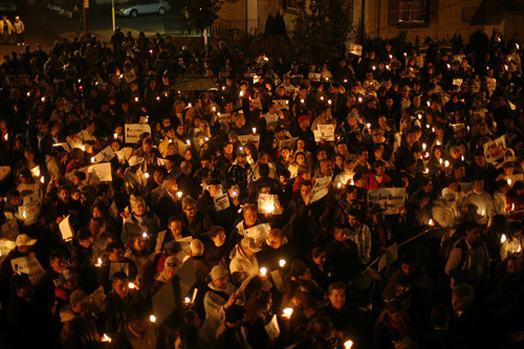 Over a thousand people gathered for a candelight vigil in memory of Marcelo Lucero.

It is shocking and disheartening to report yet another killing of a young Latino immigrant by a group of teenagers, who admit they were “looking for a Mexican.” 37-year-old Marcello Lucero, who had come to the U.S. 16 years ago from Ecuador, was beaten and stabbed to death.  Seven young men from Patchogue, NY were arrested in connection to his murder.

A thousand people gathered at the Patchogue train station on Friday to remember Lucero.

Patchogue is located in Suffolk County, which has passed a series of laws limiting services for undocumented residents. Just seven miles up the road from Patchogue is the town of Farmingville, a town whose acrimonious divisions over immigration were documented in the PBS POV film Farmingville four years ago.

Lisa Votino-Tarrant, a Suffolk County blogger, believes the laws have tainted the atmosphere. “We had a series of local laws pass that were anti-immigrant. And we kept saying, you are creating an atmosphere of hate. I didn’t want to be right about this.”

Lisa, who grew up two towns away from Patchogue, is part of a group called Long Island Wins, an information and education campaign about the contributions of immigrants that has been covering Marcello’s murder and its aftermath.

Joselo Lucero, Marcello’s brother, has been speaking out publicly against his brother’s murder and asking local faith-based groups to discuss what has happened during their sermons.

The faith community is responding.

The American Jewish Committee sponsored a community rally on Wednesday at the American Legion Hall. Local AJC Director Carolyn Levy urged Long Islanders to “raise their voices against the hateful words and climate that contributed to Lucero’s senseless murder. We cannot go on with our normal lives as long as anyone among us can be singled out for attack simply because of who we are.”

Reverend Thomas Goodhue, Director of the Long Island Council of Churches is urging faith leaders and residents to respond to the crime.

“This is just an opportunity for the community to come together, grieve, and heal,” says Lisa. “Out of this, we hope that a much larger group of people can become active and aware of what’s happening in this community and how they can make a difference.

“My hope is that everyone realizes we’re all in this together. We need to start realizing that the people next to us are just as important as we are”