No Name-Calling Week: Work to Stop Bullying | Not in Our Town
Skip to main content

Welcome to the No Name-Calling Week page. Here you'll find all of our blog posts, in descending order, related to our participation with this weeklong activity sponsored by GLSEN in 2011.

The Not In Our Town crew had the pleasure of interviewing young performing artist Julian Hornik a few years ago during Palo Alto Unified School District's Not In Our School week. He told us about the bullying and cyberbullying that he experienced after classmates discovered YouTube videos of Julian performing his original songs. Now 15, Julian sends a message to other teens: "It Gets Better." Julian states:

I wrote this song in hopes that gay teens who are thinking of harming themselves might think twice. There will come a time when the idea of tormenting someone because he or she is gay will seem as absurd as segregation does today. In the mean time, the world is getting younger and smarter and more accepting. And it will get better.

Julian is also offering this song via iTunes with all proceeds to benefit the Trevor Project. Visit Julian at http://julianhornik.typepad.com/. Here is Julian performing this song:

Today is the final day of No Name-Calling Week. Thank you to GLSEN for hosting, and for the Not In Our Town community for tuning in to these anti-bullying stories and resources.

It's Day 4 of No Name-Calling Week. Today we are sharing one of our most popular Not In Our School videos, "Students Teach Students to Stand Up to Bullying," filmed at Shaw High School in East Cleveland, Ohio.

Students in Lori Urogody-Eiler's Facing History and Ourselves class mentor younger students in how to be an upstander, not a bystander, when faced with bullying and intolerant acts. This version was included in our MLK-inspired collection, Embracing the Dream: Lessons from the Not In Our Town Movement, and is preceded by a short clip featuring Not In Our Town Billings chair Eran Thompson.

For more information, our education partners at Facing History and Ourselves offer classroom resources on Bullying and Ostracism.

On this third day of No Name-Calling Week, we showcase two videos of middle school students who  use skits to stand up against bullying and promote acceptance in their schools.  The first is a Not In Our Town video from Rockford, Illinois where student council members organized a Not In Our School campaign and a school wide assembly with student-produced skits challenging stereotypes and other intolerant behavior.

Like the students at West Middle School, these students from Tom Harpool Middle School in Argyle, Texas created this video to stand up against bullying as a part of their Destination Imagination program.

Yesterday, when we posted about the first day of No Name-Calling Week on the NIOT Facebook page, one of our Facebook fans said bullying in schools seems to be rising, while another noted the important role adults play in being models of acceptance.

As schools and organizations discuss name-calling this week, here are two interesting perspectives. The first is the preview for Let's Get Real, a film from Groundspark, that features students speaking in their own voices about their name-calling experiences. The second, below the video, comes from our archives, in which a father grapples with the name-calling of his 9-year-old son.

In December 2009, we posted the story of 9-year-old Malik Jones:* In class, a girl "called him a monkey and said he was dirty. Other students started repeating the girl’s words. When Malik touched something, classmates would wipe the spot he had touched." At home, Malik would try to wash his clean dreadlocks, and one day at school, his father Mark was asked to pick him up after Malik threw a tantrum in response to a mocking reference to his face.

Though Mark approached the school about this name-calling and the school promised to address it, Mark remained guarded. He said:

“My son was having an experience in the school that caused psychological trauma for him,” he said. “I want my son to learn that skill set of coping with people who are racist or simply insensitive…but I don't want him to suffer through this.”

In the year since this story, we have heard from the NIOT network similar scenarios of name-calling across the country. When Malik's story was published, the story received a range of responses, which seem particularly relevant sharing this week.

I experienced bullying during elementary school and junior high school and was terrified by those bullying me. I never told my parents or authorities because I feared that if my parents or teachers took action, the bullying would increase.  Instead I kept silent, hid in the bushes near school to avoid before-school harassment, took strange routes, home, etc.

I once was a target, I attended a school where I was the only minority. At first it started with words and then it escalated to pushing and then it followed me from school to out of school and the next thing I knew I was extremely afraid to go to school and this devestated me because i was soooo involved in school because all i wanted was to get a college education. This was finally an issue to the administration when pictures of me were posted up at school with racial slurs.

Here is what I don't have in common with Malik other then sex: I am not Black, I'm Armenian, and not a darker olive-toned one either, my skin is actually pretty darn fair.  But I had a set of lips, not full ones compared to the general public of today's diversity, but big for the middle class Caucasian kids that had practically none-just thin lines below their noses.  So, they also called me Nigger-lips.  I didn't even know what that meant.

Some offered solutions. This first one comes from a former principal:

This ongoing verbal and emotional abuse of an individual is a classic definition of "bullying" and needs an immediate and successful intervention by the school personnel.  ... I believe a meeting between Malik, the girl making the comments, the teacher and an administrator needs to occur. The girl must be made to understand that her actions constitute "bullying" and if she bully's Malik or anyone else there will be severe consequences for her.  Malik's parents, as well as the girl's parents, should be notified that the meeting occurred and what transpired.

A teacher at an urban midddle school said:

With all the pressures on teachers to raise test scores on standardized tests, I think some of us forget that students need to feel safe in order to learn.  Not calling another student a monkey is a huge social skill that students need to learn and have reinforced in school, and I think it doesn't happen enough.  (I've had to have the "never call another kid a monkey and here's why" discussion here with 12 year-olds.)

And finally, an anonymous poster pointed to both the severity and complexity of the issue:

Persistent bullying has no easy fix. It needs to be addressed coherently across multiple perspectives in the school. The classroom teacher needs to be proactive with in-class intervention and dilligent with documentation. The teacher should avoid brushing the issue away with a simple 'That's inappropriate' or 'Don't do that' and address the subject, honestly, and in depth to the class at large.

The No Name-Calling Week site also offers to handouts for parents: What to Do If a Child is Being Bullied and How to Talk to Educators at Your Child's School About Bullying.

But what about you? How does Malik's story, or the many young voices in the Let's Get Real preview, strike you? What advice do you have for families grappling with this tough issue?

On this first day of No Name-Calling Week, we would like to share one of our videos that highlights middle schoolers candidly speaking about name-calling, intolerance, and what young people can do to make their campus a place where all people are safe and respected.

About this video: Jane Lathrop Stanford Middle School students and teachers use campus TV to coordinate a school-wide screening of the Not In Our Town youth video, and broadcast a school-wide student forum about what young people can do to stand up to intolerance.This video, "Students Tune In and Speak Out" focuses on their dicussion sparked by the film.

For more information, check out this list of resources and ideas on how to celebrate No Name-Calling Week.

Here at Not In Our Town we are excited about the upcoming launch of an improved Not In Our School site that will provide resources for teachers, students and parents in the fight against hate. Aligning with these efforts, we are proud to be part of No Name-Calling Week hosted by GLSEN. No Name-Calling Week, now in its 8th year, is a week full of educational activities aimed at ending name-calling and providing schools with tools and inspiration to  eliminate bullying in their communities.
During this week, Jan. 24-28, we will be posting anti-bullying resources that we hope will be useful for the Not In Our Town community. As an introduction, see this impressive roster of content available on the No Name-Calling Week site:
For Students 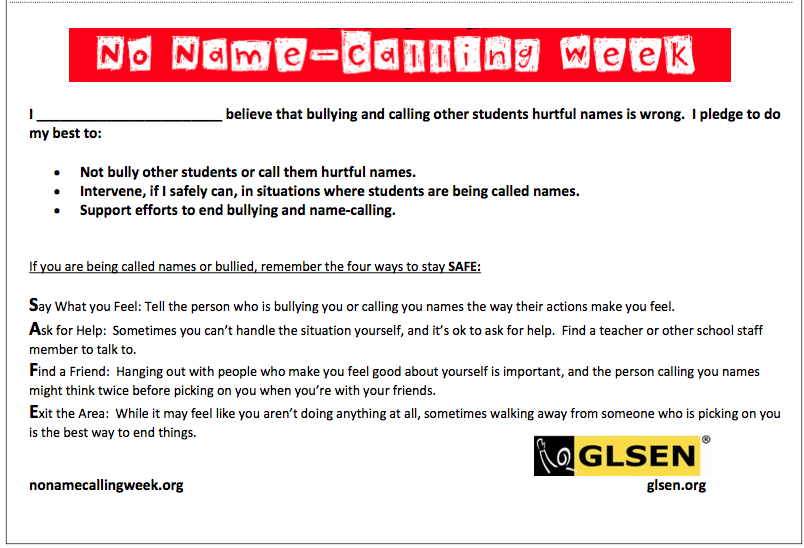 For Parents and Families 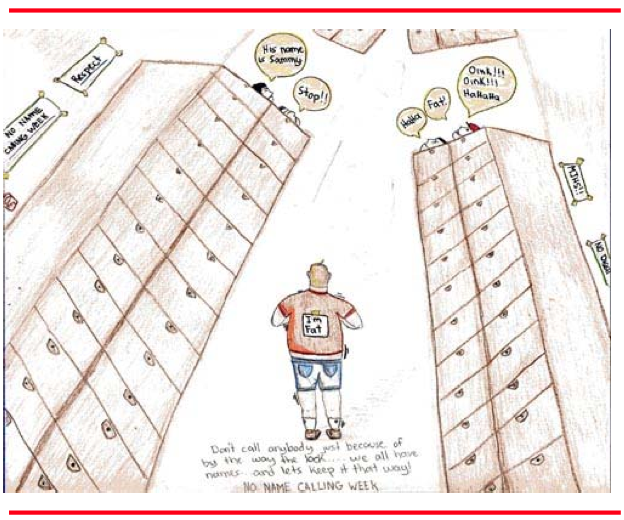 For Schools
All these resources are available on these two pages.
GLSEN is also hosting a Creative Expression Contest for Students, in which students can submit any type of artistic expression that relates to their experiences with or ideas about bullying. Over the years, thousands of students nationwide have submitted a variety of poems, stories, essays, drawings, collages, sculptures, and songs. Examples of previous years’ prizewinning entries can be found on www.nonamecallingweek.org.
Are you celebrating No Name-Calling Week? Let us know!
Bullying
anti-bullying
no-name calling week
glsen

Subscribe today for free monthly updates, resources, and films you can use in your school.