Not In Our Town: Light in the Darkness is a one-hour documentary about a town coming together to take action after anti-immigrant violence devastates the community. In 2008, a series of attacks against Latino residents of Patchogue, New York culminate with the murder of Marcelo Lucero, an Ecuadorian immigrant who had lived in the Long Island village for 13 years.

Over a two-year period, the story follows Mayor Paul Pontieri, the victim’s brother, Joselo Lucero, and Patchogue residents as they openly address the underlying causes of the violence, work to heal divisions, and begin taking steps to ensure everyone in their village will be safe and respected.

Communities can host screenings and events to discuss how to prevent hate crimes, and develop new ways to make their towns safer for everyone.

Here are 3 ways you can get involved today:
1. Host a screening in your town.
Email info@niot.org for free Not In Our Town: Light in the Darkness screening kits, discussion guides and activity ideas you can use in your neighborhood, library, civic group, or school.
2. Join or start a group.
Connect with others in your town who are standing up for safety, inclusion, and acceptance. Visit NIOT.org to find community groups near you, or to add your group to the NIOT map.
3. Share your story.
We’re always on the lookout for new stories of people uniting to stop hate. Send your ideas, activities, and events to info@niot.org. Your town may be featured on NIOT.org, or in the next NIOT documentary segment.

The People of Patchogue

Meet four Patchogue residents profiled in the film who take action to change their community. 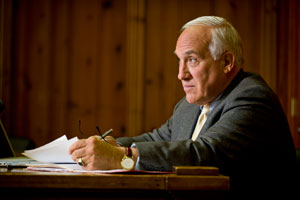 Paul Pontieri is jolted into action as he meets with Latino residents to learn how to make everyone in the community feel safe. Four months after Marcelo Lucero’s murder, the mayor leads the Patchogue Board of Trustees to pass a resolution stating that "thoughtful discourse can only occur in an environment free of hatred and vilification," and that anti-immigrant rhetoric not only harms targeted groups but "our entire social fabric." 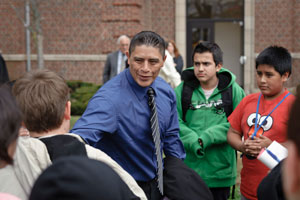 Joselo Lucero followed his older brother, Marcelo, from their hometown in Ecuador to the Village of Patchogue. Shocked by his brother's murder, Joselo calls for justice, an end to hatred, and brings attention to anti-immigrant violence in Suffolk County. Thrust into a public role as a voice for change, Joselo urges people to come together so that a tragedy, like his brother's death, never happens again. 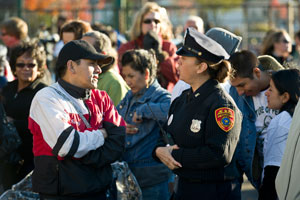 After Marcelo Lucero's murder, the Suffolk County Police Department assigned two Spanish-speaking officers to Patchogue, including Officer Lola Quesada. Lola also attends public meetings as a liaison between the immigrant community and the police. As community liaison, Lola appears on talk radio to inform immigrants about their rights and encourage them to report hate attacks to police. She also teaches essential Spanish to police recruits. 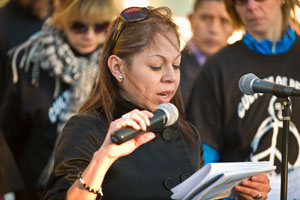 Just a week before Marcelo Lucero's murder, librarian assistant Gilda Ramos and librarian Jean Kaleda learned that people were afraid to attend evening ESL classes at the library for fear of being attacked at night. Kaleda and Ramos call for community meetings at the library, and create a safe space for the community to heal after the murder. Gilda Ramos also translates when conversation between Patchogue's Spanish-speaking residents and their neighbors was crucial.

Support for this program is provided by PBS and the Corporation for Public Broadcasting; the Einhorn Family Charitable Trust; the Reva and David Logan Foundation; and the Public Welfare Foundation.

Support for Not In Our Town outreach is provided by the Walter and Elise Haas, Sr. Foundation and the Werner-Kohnstamm Family Fund.

The Inclusive Communities Campaign is a multi-year initiative that combines the broadcast with on-the-ground action.