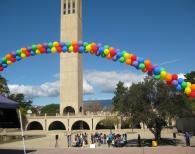 UCSB recently launched their week long “Speak Up Against Hate Campaign” in an effort to raise awareness about hate crimes and incidents.

Organized by the Office of Judicial Affairs, the week kicked off with a rally in Storke Plaza where students signed pledges to “Speak Up” against hate and shared their own experiences with discrimination.

According to a Student Affairs survey, 173 out of 271 students assessed said they knew a victim of a hate crime or incident. “Though hate crimes/ incidents occur quite often, most are usually not reported for various reasons,”says Doug Wagoner, intern at the Office of Judicial Affairs. “People may not want to make a big deal out of it, or may not know who to turn to.”

The week of facilitating dialogue against hate continued with a variety of workshops, including a summit on Feb.9th themed “Does Hate Exist On UCSB”? and “Intro to Hate Crimes/Incidences at UCSB”, which explored the differences between hate 'crimes' and 'incidents'. There were also workshops touching subjects not usually broached such as “What Does It Mean to Be Whitewashed?” and “Self-Defense 101”.

Fittingly, the week was concluded by an open-mic hosted by the Culture of Youth Progressing Humanity in Expression and Rhythm (CYPHER) at Giovanni's Pizza for individuals to share thoughts, poetry, and spoken word to speak up against hate.

Here's how I'm taking action against hate:
Organize a Rally or Vigil