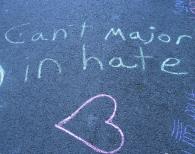 Several students and staff discovered chalked hate messages near the entrance to the campus library and the north side of Marsh Hall on Pacific University in Forest Grove, Oregon. The messages included slurs against women, Muslims, and members of the Lesbian, Gay, Bisexual and Transgendered community.

"I'm not going to get into it, but it did constitute hate speech," Pacific University spokesman Joe Lang said.

Because the messages were scrawled in chalk and did not target specific individuals, they were immediately removed and no police report was filed, Lang said.

During the rally at 11:30 a.m. on Monday, students and staff gatherer in the area between McCormick and Walter residence halls to "send a message of tolerance and acceptance" by chalking positive words throughout campus, Lang said.

Here's how I'm taking action against hate:
Organize a Rally or Vigil