We Need to Name Hate to Prevent it From Spreading

As a nation, we have to grapple with events such as these in ways that collectively deepen our understanding of the intersections between race, class, and gender at every level. We need to ask: How can we bring our communities together to end intolerance, hate, and violence? 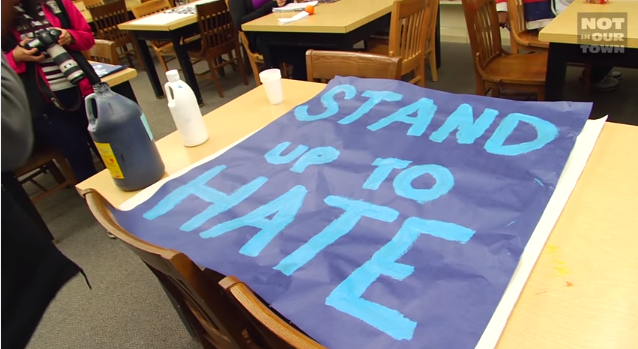 By Patrice O’Neill, CEO of The Working Group/Not In Our Town

The New York Times magazine story, “The Fire on the 57 Bus in Oakland,”—about Sasha Fleischman, an agender teen who was set on fire for wearing a skirt in November 2013 by Richard Thomas, a 16-year-old high school student—was a moving portrayal of the tragic consequences of hate and “otherness” faced by both of these young people, their families, our community of Oakland, and all people who are targeted because they are different. The story deftly outlines the complexities and challenges of charging youth offenders, but it also reminds us of the continued need for hate crime laws in this country and the naming of bias as a motive in these kinds of devastating attacks.

What makes hate crimes so insidious is that they harm not only the victim but a whole group of people who share the same characteristics as the person who is targeted—whether it be for their race, gender, sexual orientation, or religion. These crimes bring to the surface the harmful stereotyping and underlying prejudices which too often transform into acts of dehumanization and hate. If left unexamined, persistent stereotypes about race and gender—like, “A boy in a skirt is a freak,” or, “A black boy wearing a hoodie is dangerous”—inevitably lead to more crime and trauma.

The Alameda District Attorney’s initial decision to charge the attack on Sasha Fleischman as a hate crime, based on the evidence, was an acknowledgement to the entire community about the nature of the attack. First, it was important to LGBTQA residents to know that an attack on those who challenge gender norms would not be met with silence. The hate crime charge was also an indication to the entire community—including other potential perpetrators—that violence motivated by hate creates a great harm that will be addressed by the justice system. Although the hate crime charges were eventually dropped, the message had been sent.

Richard Thomas was only 16 when he set Sasha Fleischman on fire. He was initially charged as an adult, but was sentenced as a juvenile. LGBT organizations and the ACLU joined the request to the District Attorney to remove adult sanctions.  Many youth advocates agree that Thomas’s punishment should be restorative: designed to help him take responsibility for setting another human being on fire, while including a way for him to repair the harm without fueling additional hatred.

Sasha’s gender identity is challenging for many people, including Richard and his friends on the bus. At the same time, it would be a mistake to generally dismiss these kinds of acts—where a victim is targeted specifically for presenting themselves in a gender non-conforming way—as not being motivated by hate.

When young people express hateful or intolerant ideas, dismissing their actions as a simple “prank” risks sending a message—to the perpetrators, the general public and victims themselves—that the community accepts this behavior.

The tragic truth is that the majority of hate crimes are perpetrated by young people.

In the early morning of June 26, 2011 a group of  young white Mississippians drove to Jackson and brutally assaulted and murdered James Craig Anderson, a 49-year-old African-American in a motel parking lot.  That same year, Ecuadorian immigrant Marcelo Lucero was killed in an attack by seven local high school students on Long Island. These young men had been roaming the streets for months, looking for Mexicans to beat up.  Previous attacks by these teenagers had been written up simply as “youth disturbances.”

Hope and healing  emerges from hate at Oakland High

If we’re looking for models for community response to hate, we might start with Richard Thomas’s own high school. After their fellow student was arrested, the Oakland High School community came together to break the silence and open up conversations within their classrooms.* They collected funds for Fleischman to help with medical costs and reached out to the family. Students participated with the larger community in a “Rainbow March” that proceeded along the bus route. They brought together Thomas’ friends in a restorative circle to listen to their feelings.

In this Not In Our Town video, the varsity boys basketball team launched their 2014 season by replacing their usual blue and white Wildcat jerseys with T-shirts bearing the message “NO H8” (No Hate) printed on the front, and a single name, “Sasha,” on the back.

The students did all of these things to honor Fleischman and remind the local community that Oakland High is an inclusive school where diversity is celebrated and students stand up to injustice. Around the gym, posters created by students declared, “Not In Our School” and “Stand Up To Hate.” School leaders supported these actions and made sure the complexity of this situation would not lead to greater divisions.

Would these powerful actions by young people and school leaders have taken place if the attack on Sasha had not been named as a hate crime?

As a nation, we have to grapple with events such as these in ways that collectively deepen our understanding of the intersections between race, class, and gender at every level. We need to ask: How can we bring our communities together to end intolerance, hate, and violence? This challenge to build a more inclusive world starts in our homes, our schools, and places of worship where we create opportunities to learn about each other’s histories and backgrounds, and work together to build communities where kids and adults, across race, ethnicity, religion, and gender spectrum get to know each other as people.

We can work together to create a kinder and more accepting society, but first, from Ferguson to Oakland, we must confront and name the hate and intolerance that surrounds us.

We look forward to sharing the voice of Sasha, Sasha’s family and the students, school leaders and community members in Oakland who are facing hate and working to heal.

*Not In Our School director Becki Cohn-Vargas is working with school leaders on anti- bullying programs at Oakland High. The Not In Our Town team is producing a short film about this story.