We Know History, and We’re Willing to Repeat It | Not in Our Town
Skip to main content

We Know History, and We’re Willing to Repeat It 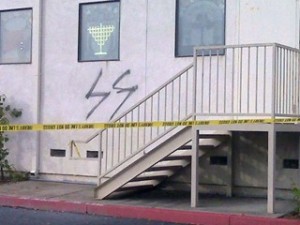 An attack last week on a Sacramento-area synagogue brought back ten-year-old memories, when the community pulled together and said no to hate.
In the early hours of Nov. 9, 2009, Nazi symbols and messages were spray-painted on the walls of Congregation Beth Shalom in Carmichael. Along with swastikas and “SS” lightning bolts was the phrase “Kristallnacht still lives,” a reference to the 48-hour period 71 years ago when Jewish people, synagogues and businesses were attacked all over Nazi Germany.
Beth Shalom was one of three local synagogues set ablaze ten years ago, on the night of June 18, 1999. A white supremacist and his brother were later convicted of those crimes.
The city came together quickly after those 1999 attacks. Following the lead of Billings, MT , the Sacramento Bee published a full-page proclamation of unity, which it urged residents to display in their windows. Three days later, 4,000 people attended a unity rally in the Sacramento community center.
This month’s attack was less heinous, but authorities are concerned by the advance planning it indicates.
“According to the cops, they had cased our building. The attack was timed to a very significant anniversary,” said Michael Alcalay, Beth Shalom’s president. “This was a sophisticated nutcase. The message was: We know history, and we’re willing to repeat it.”
But the community had been through this before, and knew what to do. Alcalay reports that emails and phone calls of support have been pouring in to the synagogue switchboard. Some were posted on the congregation’s Facebook Wall.
Sacramento Mayor Kevin Johnson declared in his message, “The defacing of Congregation Beth Shalom in Carmichael is a sad reminder of the hatred and intolerance harbored by a few individuals.”
Alcalay says the painter who came out to cover over the graffiti was so upset that he refused to charge for his services.
“It’s gratifying to know we have such support,” Alcalay commented.
According to the California Attorney General’s office, hate crimes against the LGTBQ community and Jews are on the rise. In 2008, there was a 28 percent increase in attacks targeting the LGTBQ community in California, and a 37 percent increase in violence targeting Jews.
Overall, more than half of last year’s  reported 1,397 hate crimes in the state were motivated by racial or ethnic bias. Religious bias was the second most common cause.

Does your community have a network of faith leaders and government officials ready to respond quickly when hate strikes? Have you ever attended a unity rally to support victims of hate violence?

Please share your story in the comments field below.

Repeating history-- by standing up to hate

I was so struck by  Beth Shalom President Michael Alcalay's comment about the attack on the synagogue taking place on Kristallnacht:

" The message was: We know history, and we’re willing to repeat it,” he said.

Through Not In Our Town, we have been spreading the story of Sacramento's response to hate in the aftermath of the synagogue arsons in 1999. It's a powerful story of a community acting swiftly and in unison.

It is heartening to hear that the people of the region remember-- and are showing their support to this congregation.