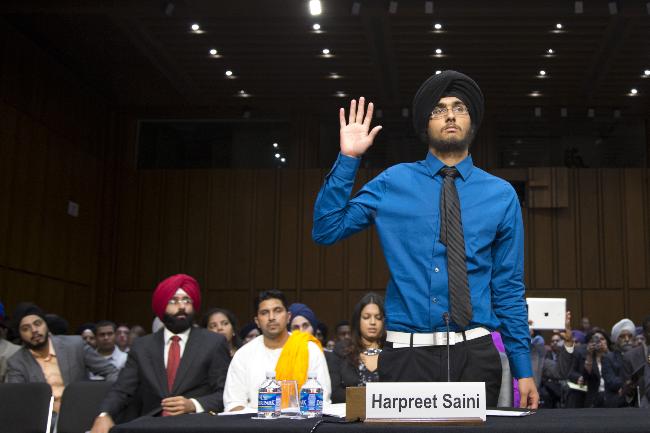 “I want to tell the gunman who took her from me: You may have been full of hate, but my mother was full of love,” said Harpreet Singh Saini, who lost his mother in the tragic hate crime killings at a Sikh gurdwara in Oak Creek Wisconsin on Aug. 5.

The hate crime attack, one of the deadliest in recent U.S. history by a white supremacist gunman, resulted in the death of six Sikh worshippers and the injury of three others, including an Oak Creek police officer.
Singh Saini, 18, testified before a Senate Judiciary Committee Hearing on “Hate Crimes and the Threat of Domestic Extremism” about the devastating effects of the hate crime killings. Sen. Dick Durbin of Illinois who convened and chaired the hearing said he was moved by the testimony of Singh Saini and that it should be heard “by people across the country.” Wisconsin Sen. Herb Kohl introduced his fellow citizen.
“I am here on behalf of all the children who lost parents or grandparents during the massacre in Oak Creek, Wisconsin,” Singh Saini told lawmakers on Sept. 19. “[The gunman] killed my mother, Paramjit Kaur, while she was sitting for morning prayers. He shot and killed five more men–all of them were fathers, all had turbans like me.”
The Sikh community, along with interfaith and civil rights groups, called for the hearings to urge the FBI and Justice Department to specifically count the number of attacks on Sikhs as part of their monitoring of hate crime attacks based on religious bigotry.
“We cannot solve a problem we refuse to recognize.” 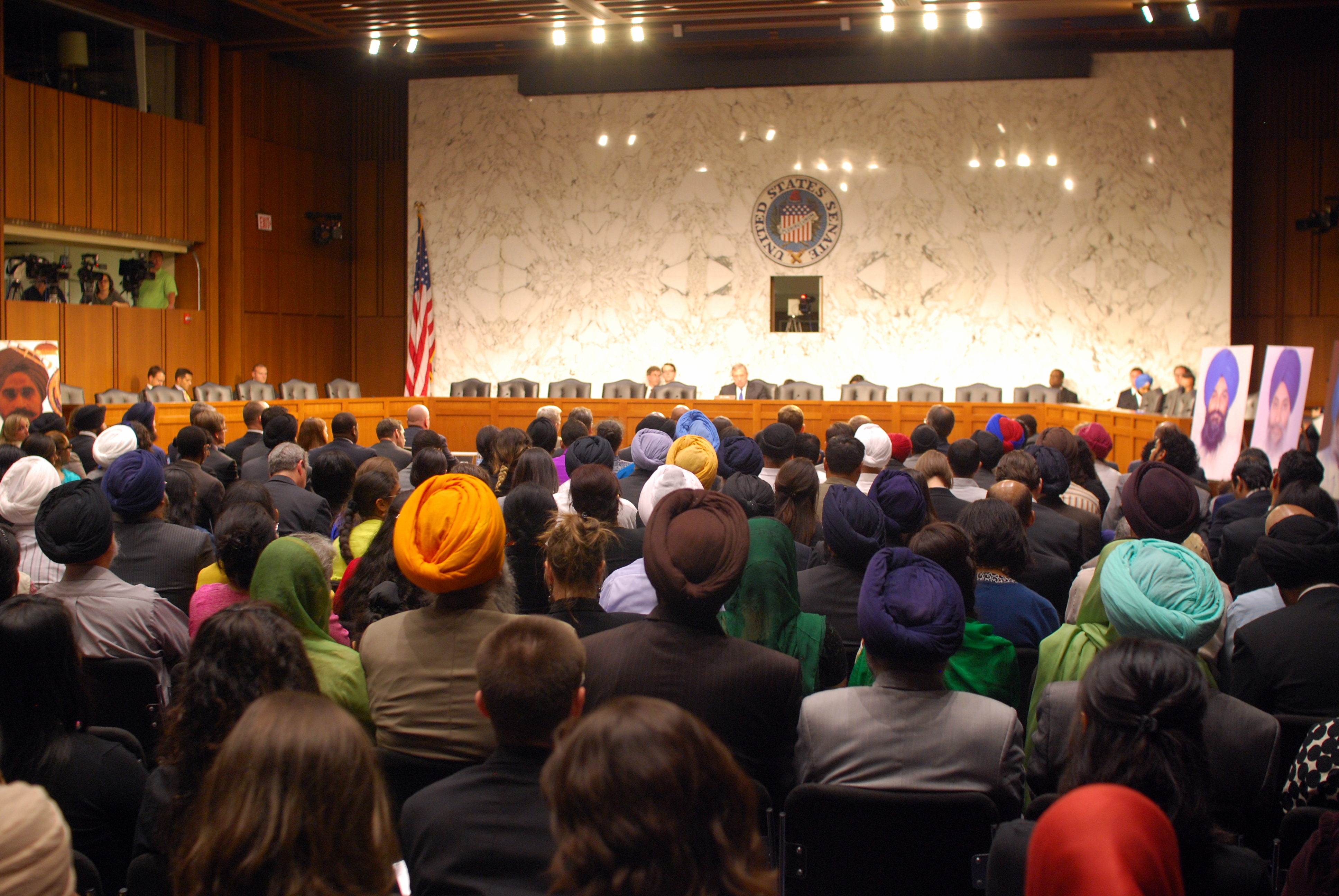 The FBI currently monitors all hate crimes based on religious bigotry that are reported by local law enforcement. In its annual report, the FBI separates anti-Semitic, anti-Muslim, and anti-Christian attacks into subcategories of attacks based on religious bias. The Sikh community wants attacks to be counted as a group as well.

He asked that the lawmakers and leaders give his “mother the dignity of being a statistic” and to “pursue domestic terrorists with the same vigor as attackers from abroad.”
Sen. Durbin asked when and if official monitoring of specific anti-Sikh attacks could begin. Deputy Assistant Attorney General for the Civil Rights Division Roy Austin reported that a meeting will be convened in the next few weeks with the department’s community relations service, Sikh-Americans and faith leaders to discuss how to move forward.
“We ache for our loved ones. We have lost so much. But I want people to know that our heads are held high. … Like my Mother, my brother and I are working every day to be in a state of high spirits and optimism,” Singh Saini said.
“We also know that we are not alone. Tens of thousands of people sent us letters, attended vigils, and gave us their support – Oak Creek’s Mayor and Police Chief, Wisconsin’s Governor, the President and the First Lady. All their support also gave me the strength to come here today.”  (See NIOT Video, “Oak Creek Gathers After Hate Crime Killings at the Sikh Temple of Wisconsin”)
Are we sufficiently monitoring domestic extremists?
Daryl Johnson was the senior domestic analyst at the Department of Homeland Security from 2004-2010. He testified that there is a shortage of analysts assigned to monitor and assess domestic extremist activity. During his tenure, he said five analysts were charged with tracking domestic extremists, but the team has since been disbanded, leaving only a single person to monitor “the entire spectrum of domestic non-Islamic extremism at a vulnerable time of heightened extremist activity throughout the country.”
Johnson pointed to an incident in 2010, when a tax resister crashed a small plane into the IRS building in Austin, Tex., injuring 13 people and killing a government employee. In 2011, backpack loaded with explosives was left on the path of a Martin Luther King Day march in Spokane, Wash. Johnson also said there have been multiple plots to "kill ethnic minorities, police and other government officials by militia extremists and white supremacists in our country."
Other officials who testified included Deputy Under Secretary Scott McAllister of the Office of Intelligence & Analysis and the FBI's Counterterrorism Division Deputy Assistant Director Michael Clancy.
Recognizing Hate Crimes: The Controversy Persists 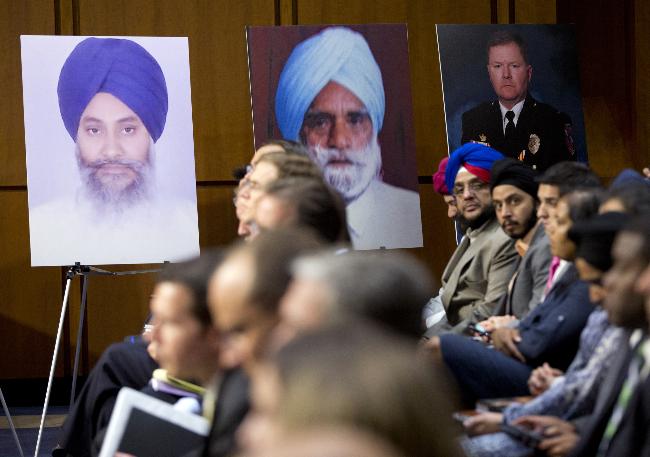 “Those who are prosecuted call themselves victims of political correctness and martyrs to the First Amendment,” said Jacobs, who has been critic of hate crime laws for more than 20 years. "I do not think it is justifiable, desirable or useful to create a hierarchy of crimes and victims based on the racial, religious, gender, sexual orientation identity of the perpetrator and/or victim."
Bias crimes could be a cause for enhanced sentencing, according  to the Supreme Court, Sen. Durbin reminded Jacobs. Hate crimes are not prosecuted separately, but allow prosecutors to make a case for additional sentencing based on motive.
Sen. Durbin asked Jacobs if he believed that there should be enhanced sentencing for terrorist attacks. Jacobs replied that he believed in recognizing terrorism for harsher sentences because it disrupts civic culture and threatens a large number of people.
“I question whether or not you are consistent in allowing for enhanced penalties for terrorism but not for hate crimes,” Durbin said.
One of the officials who assisted Sikh residents of Oak Creek was Lt. Brian Murphy. Murphy was on the scene when white supremacist gunman Wade Michael Page opened fire at the gurdwara that Sunday. Lt. Murphy was critically injured in the shooting.
Singh Saini said he was inspired by the police officer’s courage, "I also want to be a part of the solution. That’s why I want to be a law enforcement officer like Lt. Brian Murphy, who saved so many lives on Aug. 5, 2012,” he said. “I fear it may happen again if we don’t stand up and do something.”
Even after the tragic loss of his mother, 18-year-old Singh Saini said, “I still believe in the American dream. In my mother’s memory, I ask that you stand up for it with me. Today.  And in the days to come.”
For more information on the Senate Judiciary Committee hearing, “Hate Crimes and the Threat of Domestic Extremism,” click here. Check out interfaith group Groundswell's blog on the hearing and calls to action from civil rights groups.
In:
law enforcement
hate crime reporting
interfaith
hate crimes
Sikh
Wisconsin
oak creek
senate
law makers