Seeking Change Between Police and Communities: From the Streets of Camden | Not in Our Town
Skip to main content

Seeking Change Between Police and Communities: From the Streets of Camden 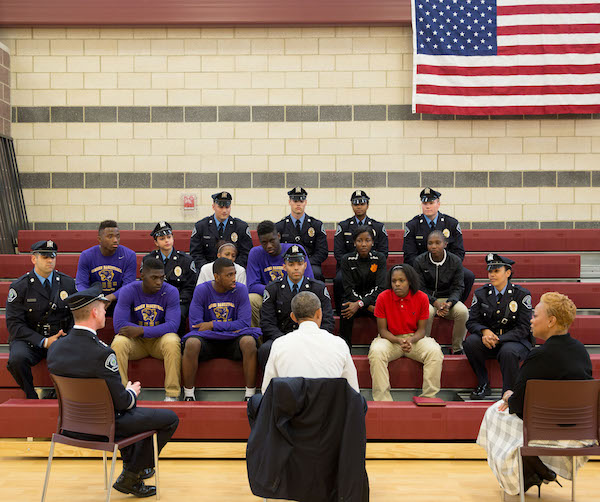 Before Alton Sterling was killed by police in Baton Rouge, before Diamond Reynolds’ live video captured the horrific scene of Philando Castile dying from an officer-inflicted gunshot wound in Minnesota, before five police officers were killed by a sniper targeting law enforcement in Dallas, and then three more officers were killed in Baton Rouge, I was standing on the dark streets of Camden, New Jersey with a camera in my hand.

I traveled to Camden with a NIOT film team to produce a story about the police reforms that are in progress in what has been labeled one of the most violent cities in America. Camden, just across the bridge from the City of Brotherly Love, has an average per capita income of thirteen thousand dollars a year. Think about that. The scars and wounds that result from so little money are visible on the barely paved streets and abandoned houses of this once proud manufacturing town. At first I was so angry about the starkness of the poverty here, it was hard to see that what also exists here is a spirit in the residents and pride for a place that is starting to come back. 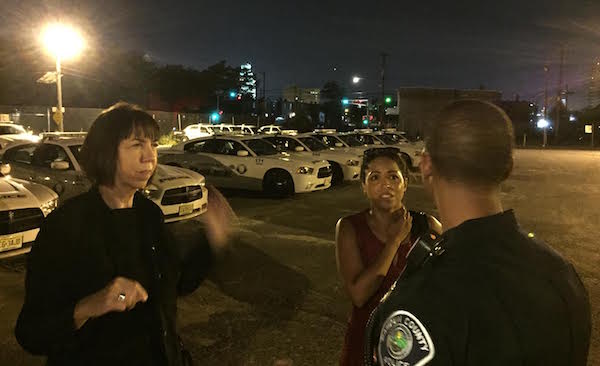 The street light faded as we entered the center of a North Camden park with one of the officers we were following. You could hear the sounds of children echoing throughout the playground and active basketball courts. The kids surrounded the officer and the camera crew to ask what was happening. At first there was a lot of laughing and the interactions were positive, but it devolved when one of the older kids continually interrupted the officer with F-bombs in front of the smaller children, and the officer tried to get him to stop being disrespectful.

How do you create a safe and respectful atmosphere in a city where residents told us they were once afraid to come out of their houses, afraid to allow their children to ride bikes and play in their neighborhoods? How do you build trust in a town with a police force that had the highest number of excessive-force complaints in the state? Camden County Police Chief Scott Thomson and city leaders decided to take drastic action. A transformative moment came in 2013, the entire police force of Camden was let go, and a new department was built to serve Camden County. If officers wanted their jobs back, they had to reapply and commit to change. Making streets safe again depended on trust between the community and the police that were there to protect them.

We interviewed dozens of community members and officers who talk about the new ways people are interacting. Our film team went to a community barbecue, baseball games, a summer camps for kids, met with a teen group called Urban Promise, spoke to former drug dealers, and followed officers as they talked about their role as guardians and not warriors, and shared what building relationship with the community means and what it looks like. This is not a fairy tale, this is Camden. Not everything is fixed, but the people we spoke with say there is real change in the way the police are working with them in this city.

A guiding principle behind Camden’s reform is respect. The department trains its officers in the use of procedural justice, or procedural fairness. It’s so basic and straightforward. Respect and fairness are what the protest movement has called for since Ferguson.

As Camden officers were talking with the children in the park, parents started showing up. I was standing away from my crew with my headphones on, a mic and a small camera, dressed in the attire I’d worn to the White House earlier in the day for a de-briefing on the President’s Task Force 21st Century Policing. I was conscious of my outsider status, and also worried about how the presence of media often changes an interaction. Would the situation escalate because our cameras were there? That’s exactly what we didn’t want to happen, but it kind of did. One kid wouldn’t back down, three other police officers showed up to de-escalate the scene, and the children under 18 were sent home because the park was supposed to close at dark.

Two adults approached me and asked what was going on. I said we were doing a documentary on police reforms in Camden. The woman walked away, and then a forty something guy said to me, “You see them, but you don’t see us.” “I’m here, I’m listening. Please tell me what you want me to see,” I replied. He said I was probably a nice lady and walked away. I’ve spent a good portion of my life trying to tell stories responding to his call, but there is so much more to do. I wish I had followed him to learn more, but his words were clear. White blindness is an affliction that is crippling our country. And the streets of Camden are a stark testament to how little one of the richest nations in the world is willing to invest in a place where people without money live.

In Camden, the police and community are trying to wrestle with some of the most pervasive problems in our country. They are showing us that opening our eyes to face what’s tearing us apart is the first step to moving forward.

The protests continue and so do the funerals. The only way through this fragile moment is for us to see one another; for all of us to feel the heartbreak of Diamond Reynolds, her daughter, and the family of Philando Castile; to grieve with the five children of Alton Sterling and their entire family; to share the anguish and pain in Dallas with the families and department of the police officers who were murdered or wounded because they took a job to protect and serve.

We have to be there for each other with Open Eyes, Open Ears, Open Hearts.

No hate, no fear, no violence. Not In Our Town.

For the past three years NIOT has been engaged in partnership with DOJ COPS Office on a series of films about community-oriented policing, the cornerstone of Obama's 21st century policing strategy.  After Ferguson, and with the emergence of the Black Lives Matter movement, the country was shaken into a national conversation about institutional racism, police use of force, and what could be done to make real change on the ground in communities and law enforcement agencies across the country.

Leading researchers on this topic, including Professor Tom Tyler of Yale Law School, have identified several critical dimensions of procedural fairness: (1) voice (the perception that your side of the story has been heard); (2) respect (perception that system players treat you with dignity and respect); (3) neutrality (perception that the decision-making process is unbiased and trustworthy); (4) understanding (comprehension of the process and how decisions are made); and (5) helpfulness (perception that system players are interested in your personal situation to the extent that the law allows). Excerpt from "The Case for Procedural Justice: Fairness as a Crime Prevention" by Emily Gold of the Center for Court Innovation on the COPS Office website.

Charles Blow urgently described the crisis of racism, policing and poverty in his column, "A Week from Hell."

In:
Camden
Police Reform
Not In Our Town

I remember when you first started this project and I appreciate you've lived your life trying to make a difference.