Responding to Racism on Campus: Student Leaders Stand Up to Hate | Not in Our Town
Skip to main content

Responding to Racism on Campus: Student Leaders Stand Up to Hate 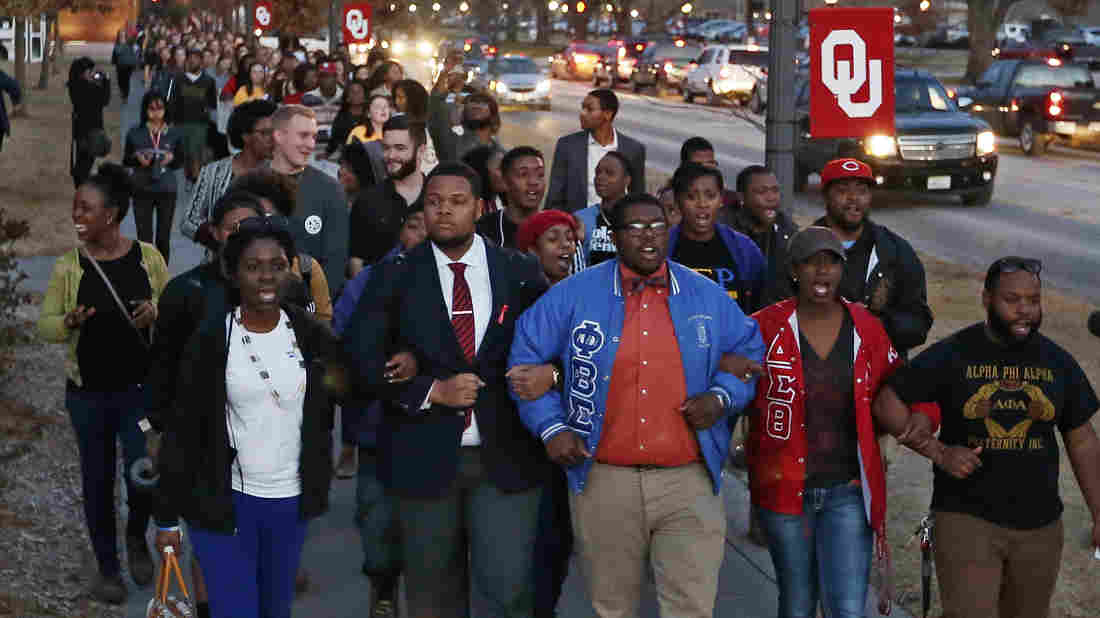 Students marching to the Sigma Alpha Epsilon fraternity house during a rally against racism Tuesday. (Photo by Sue Ogrocki/AP via NPR.org)

After several members of the Sigma Alpha Epsilon frat were caught on video taking part in a racist chant last week, the University of Oklahoma moved decisively Monday, cutting ties with the national fraternity, ordering that its on-campus chapter be shut down, and expelling two students involved in the incident.

The racism in Oklahoma may seem unthinkable for students at a major American University in the 21st century, but they sadly echo events at campuses across the country. Looking at how these campuses have come together to respond in the past sheds light on how this community - and our country as a whole - can prepare for and prevent incidents of hate in the future.

Here are two inspiring examples of campus unity following intolerance that we've documented at Not In Our Town.

Students Stand Up After Segregationist Chant at the University of Mississippi

At the University of Mississippi, a segregationist chant and Ku Klux Klan rally threatened to divide the campus community in 2009, but student leaders and their chancellor took a collective stand against intolerance.

A major factor was the fact that students had previously formed an anti-hate group called "One Mississippi" on campus, which laid the groundwork for what eventually resulted in the banning of the offensive chant, as well as a peaceful counter-protest of the Ku Klux Klan. (read the full story)

When racist tweets and “white power” graffiti left students feeling threatened and unsafe at Bowling Green State University in 2013, the campus and community united to refute hate and join the national Not In Our Town movement. (See how they reacted here).

Prior to the hateful tweets, the BGSU's President’s Advisory Council on Diversity and Inclusion was in fact already working to bring the NIOT program to campus. And as in Mississippi, this forward-thinking approach to inclusion positioned the school to act swiftly and effectively.

Be Proactive - Tools to Use

Being proactive on campus - establishing a student-led culture of dialogue, diversity and peace - cannot guarantee that intolerance will disappear, but it provides a starting point for how schools can effectively handle crisis situations and inspire real, positive change moving forward.

One way to begin is by hosting a screening of our short film, Class Actions, which features various stories of universities and students working together to confront hate. Or order a free copy of A Bowling Green Legacy.