Red Dot, Green Dot Alert | Not in Our Town
Skip to main content

Phoenix, AZ: Thousands of protestors against Arizona’s tough new immigration law, which President Obama decried as “misguided,” descended on the state capitol April 23-25 (see photo below). More are expected this weekend, including a delegation from PICO National Network—a coalition of 1,000 religious congregations representing 1 million families nationwide. PICO-affiliated congregations in 14 states are holding concurrent events, as part of “Pray for Immigrants Weekend,” a nationwide call for fair and just immigration reform. 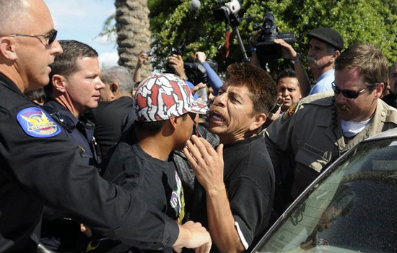 Tallahassee, FL: Florida has become the third state to treat attacks against the homeless as a hate crime.  Florida leads the nation in number of attacks on the homeless. A similar bill is wending its way through the Rhode Island legislature, and is under consideration in California as well.

Bremerton, WA: Students, staff and faculty at Olympic College held rallies April 21 and April 28 (pictured above) to demand better protection from hate violence after racist threats against a minority faculty member were found in a men’s bathroom on campus.
Champaign-Urbana, IL: University of Illinois students held a “Hug In” April 16 (pictured below) to commemorate the 2008 murder of a gay student; the event was held in conjunction with Day of Silence, a national remembrance of victims of anti-LGBT violence. 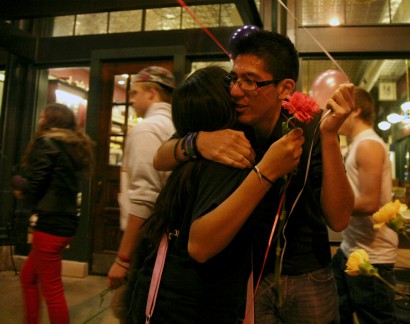 Long Beach, CA: A rally at California State University’s Long Beach campus focused attention on a recent attack against a transgender grad student who was cornered in a men’s bathroom by an assailant who carved letters into his chest with a sharp object; the victim released a statement praising the university’s response, but his supporters say the administration should have warned other LGBT students sooner after the incident.
San Francisco, CA: A San Francisco man with a history of violent attacks against women was charged in the 2007 rape and murder of a transgender prostitute. Prosecutors seek to charge him with four other rape-molestation cases of transgender sex workers in the city. LGBT activists say because the defendant’s DNA sat untested for two years, he was free to walk the streets and commit the later attacks.
Chico, CA: The Nigerian-born student body president of California State University, Chico, was stabbed in what police are calling a hate attack.
Hayward, CA: Three young Muslim men took a plea deal from prosecutors for the drive-by shooting of a gay man with a BB gun. 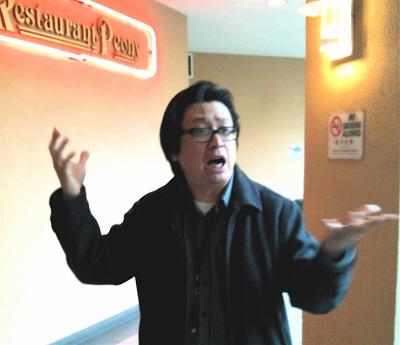 Oakland, CA: Police told the largely Asian crowd at a town-hall meeting in the city’s Chinatown district April 28  that there is no evidence the April 16 beating death of a middle-aged Asian man by two African American teenagers was a hate crime. Some in the audience disputed that assessment, including Young Kong, a talk-show host on a Cantonese radio station (pictured above), noting that a recent spate of attacks against middle-aged and elderly Asians in San Francisco has left the Asian community fearful and angry.
New York, NY: Two young girls and a 15-year-old boy were arrested in connection with attacks on five older Asian women on Manhattan’s Lower East Side. The girls allegedly beat up their victims while three teenage boys watched. The defendants’ parents turned them in to police. 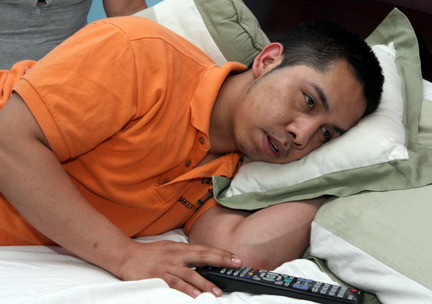 Staten Island, NY: Three men were arrested for beating a young Mexican man who came alone to the United States at 13 to find work and support his family back home; the victim, who worked his way up to head baker at a local shop, had his spirits buoyed by well-wishers as he lay in hospital (pictured above). The New York Police Department’s hate crime unit is looking into a series of attacks on Mexican immigrants in Staten Island this past month, to decide whether they merit investigation as hate crimes.
Brooklyn, NY: Trial continues in the 2008 hate crime murder of Ecuadorean immigrant Jose Sucuzhanay, who was attacked while walking arm-in-arm with his brother. One of the two defendants admitted crushing the victim’s skull with a baseball bat.

Shout Out to Not In Our Town: A blog posting on Change.org examines the upsurge in hate attacks by teens against Hispanics in New York, and points to NIOT.org as a valuable resource in creating safer, more inclusive communities.

Here is a link to an article in the Missoulian (Missoula, Montana) about the community in and around Kalispell, Montana standing up to racists and Neo-Nazis, while protecting the right of free speech for all.
Kalispell's paper covered the subject, but not online. There is a reference to Billings' "Not In Our Town" too:

Sweet blog! I found it while searching on Yahoo News.
Do you have any suggestions on how to get listed in Yahoo News?
I've been trying for a while but I never seem to get there!
Many thanks

I wanted to thank you for this good read!!
I certainly loved every little bit of it. I've got you saved as
a favorite to look at new things you post…