Profile: Davis Phoenix Coalition | Not in Our Town
Skip to main content

Alexandra Lee-Jobe is a longtime social activist and educator in Davis, CA. An active member of the Unitarian Universalist Church of Davis, Alex has led the organization's Anti-Racism Task Team and worked tirelessly to initiate and improve diversity and inclusion in her community. Recently Alex has become a founding member of the Davis Phoenix Coalition, a member of the Not In Our Town Network. This group is working on creating an inclusive community center servicing the diverse Davis community.

Tell us about your community.

Davis is a small city with a population of 66,000 residents and 33,000 college students. The University of California, Davis is the largest employer of 28,000. It's a bike-friendly city with a well-respected school system and a "liberal" community. It is also known as the second most educated city in the U.S. I went to college here, in 1972-73, receiving a B.S. in Applied Behavioral Science.

In terms of racial demographics in Davis, whites make up 42,000, Non-Hispanic or Latinos are 39,000, and Hispanic/Latinos are 4,000, according to 2010 Census numbers. Yet there is a dark underside of the city that creates an atmosphere where hate crimes are committed. From Thong Hy Huynh, a Vietnamese student who was stabbed to death on the Davis High campus in 1983, to Mikey Partida, a gay man beaten nearly to death on a Central Davis street in 2013, crimes of hatred have occurred. Safe??

What kind of work do you do in your community?

I work as a teacher in a child development center and am retired from working as an elementary school teacher, for the last 35 years, in Sacramento and San Francisco. I am a member of the Anti-Racist Task Team from the Unitarian Universalist Church of Davis, which I have attended for 17 years. Since June, I have been working on building a new community group called the Davis Phoenix Coalition.
When did you become involved in anti-hate work and why?
I guess, when I became a teacher, I always wanted all of my students to feel a part of my classroom. I did all I could to include their cultures through literature and self-made curriculum. I have been committed to anti-hate work because I know how it feels to be a marginalized person, due to being a person of color myself. I have always been committed to doing all I can to support children and families who are not members of the status quo.
I worked for 20 years at Susan B. Anthony, a Sacramento school has a predominantly Hmong population. I always did all I could to bring Hmong culture into my class and school. I led and directed a Multicultural Festival for 15 of the years I was there. 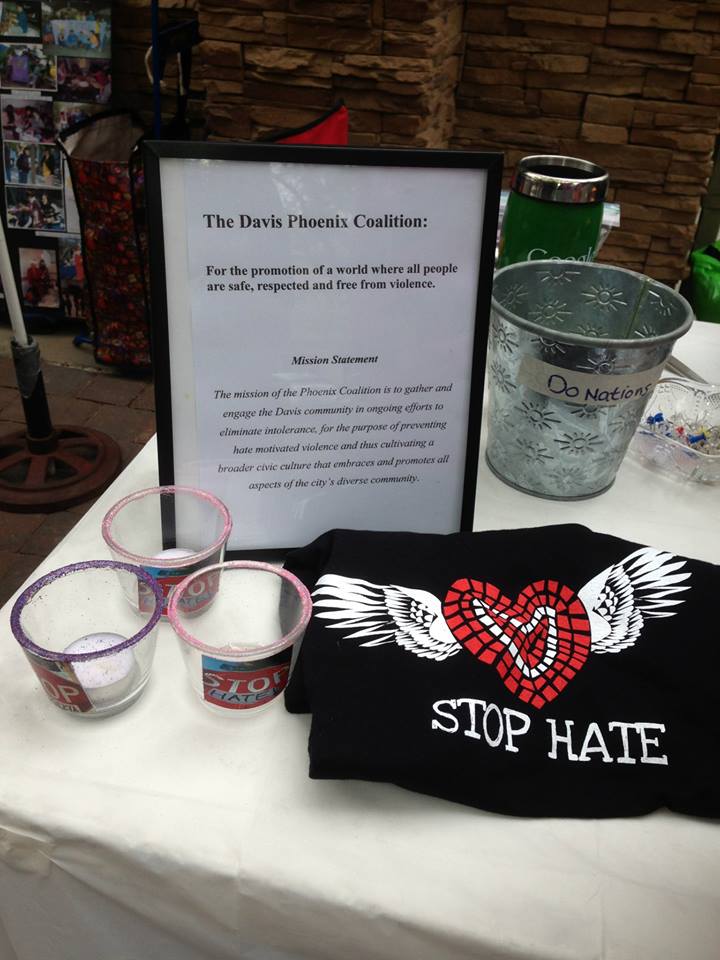 Left photo: Alexandra Lee-Jobe, Gloria Partida and Mayor Joe Krovoza. Right photo: Davis Phoenix Coalition at the Davis International Peace Day Gathering on Sept. 21, 2013.
What work are you most proud of?
This past year (September 2012-June 2013), I have been been involved in several projects that I'm especially proud of.
In early December, I helped plan and present an event called "Breaking the Silence of Racism." It was comprised of a panel of representatives from city government organizations—the school district, interfaith community, county district attorney's office, etc. The public was invited to share incidents when they had been treated in a racist manner. We were surprised to see 100 people show up to share their devastating stories.
As a part of The Anti-Racism Task Team, mentioned above, I worked on studying African American issues.  We sold the books, The New Jim Crow by Michelle Alexander and The Warmth of Other Suns by Isabel Wilkerson and held discussions about them. We also screened and discussed the films The House I Live In and To Kill or to Cure. Also, as a part of the ARTT, I showed the film, Not In Our Town: Light in the Darkness which explores the issue of Immigration and how a community can come together and bond after a horrible tragedy.
My latest project is the formation of a new community group called the Davis Phoenix Coalition. It was created after a young gay man, Mikey Partida, was nearly beaten to death in a hate crime. We currently are working on becoming a nonprofit organization and just held our first event. I am hoping this group can come together and build a new Davis community that is truly inclusive of all members of our community.
What advice would you give to other community leaders who want to address hate and intolerance in their town?
I would ask them to (1) have faith and not give up, (2) take care of themselves and their own families, (3) it is very helpful to be able to work within a faith community, (4) it doesn't take a large group to create change, just a small core group and (4) find others to work with and support them.
Learn more about the Davis Phoenix Coalition at their Facebook page.
In:
profile
California
hate crime response
Davis
anti-hate group
davis phoenix coalition