Principal Phomvisay, A Community Leader in Marshalltown | Not in Our Town
Skip to main content 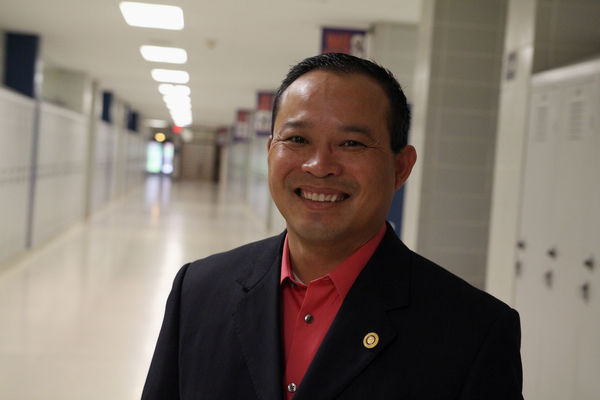 Principal Aiddy Phomvisay takes his morning walk through the school corridor before the shrill clang of the bell marks the start of the day.

His rounds are part supervisory, part social. He compliments a teacher's cardigan, noting it matches his hibiscus collared shirt, crisply tucked into his black pants.

With students, he provides a fist-bump, or redirection when he sees youths dawdling in the hallway before first period begins.

Stooping to pick up a wad of paper - that single blemish on an immaculate white tile floor - he deposits it in the nearest trash can.

After four years, his tenure is coming to an end. A new job awaits him in the Des Moines Public School district. Phomvisay will have to let go of Marshalltown High School's helm.

But as a perfectionist, there are always more rungs to scale and more dreams to realize.

"My only regret is I wish I could have done more," he said.

Phomvisay arrived in Marshalltown in 2011 after leaving Valley High School in West Des Moines, where he served as associate principal.

District Superintendent Marvin Wade gave him a chance and let him soar, Phomvisay said: "His directives to me were very clear: 'I want you to do the very best job you can, to be yourself and take Marshalltown High School to the next level.'"

Phomvisay's goal was student improvement. But with students' proficiency in reading and mathematics falling below the state average, that was, and still is, a challenge.

"A great challenge, yes, we don't deny that. But we see that as an opportunity to improve and change the lives of our students and break the cycle of poverty," he said.

Phomvisay said it was time for a "community call" to make "some pretty dramatic changes."

With support from a strong administrative team and faculty across the district, innovative programming and services were implemented in the school, he said.

That included the creation of smaller learning communities, which allows staff to better monitor student attendance and performance. Supports were added for English Language Learner students in the form of sheltered instruction.

Phomvisay also saw the initiation of Project Lead the Way, a program that provides students with specialized classwork in engineering and biomedical sciences.

The high school is now certified as a model for other districts hoping to offer similar courses.

Representatives from Iowa schools have visited with the hope of replicating the school's successes.

Although the high school is a leader in the field, there is room for improvement, Phomvisay said.

Annual state test scores have fluctuated. Within grades, students would make significant gains between tests, sometimes several years at a time, "but that still was not enough," he said.

The gap between student performance compared to expected performance for their grade level has, at times, been "enormous."

"Our staff knows that, and we work very, very hard to meet all the learning needs of our students," Phomvisay said.

Improving students' preparedness for future careers is another priority.

He believes the high school's learning academy program can be expanded.

The academies are a series of courses focused on particular topics. They are designed to prepare students for a career or college study in that field by providing instruction applicable to the workplace.

He hoped to oversee the integration of project-based learning across multiple disciplines.

For instance, engineering or business courses could be taught in conjunction with Spanish, providing a foundation of technical reading and writing in a different language.

"We have things ready," he said. "Marshalltown and Marshalltown High School are on the precipice of doing extraordinary things."

Phomvisay's time as principal was not without obstacles.

Rumors spread that further violence would occur at the high school, which led to a significant portion of the student body avoiding school the day additional fighting was to occur. Those rumors were deemed uncredible after the Marshalltown Police Department investigated the allegations.

Van Staalduine, a school athlete, initiated a lawsuit against the district last year when he was suspended from playing in two football games after school administrators discovered a photograph taken on school grounds.

The picture displays Van Staalduine and two others dressed in white with fingers contorted to resemble the letter "W." Administrators claimed it was a racial gesture denoting white power.

After Van Staalduine's suspension, his parents brought the matter before the Marshalltown School Board. They alleged Phomvisay held a meeting with them in which he accused the family of being racists.

A court hearing was held earlier this year during which Phomvisay detailed the response he received from community members following media coverage of the board meeting.
He described to the presiding judge threats of violence made against him and his family. Criticisms of Phomvisay's character that were written on the school district's social media website at the time included racial epithets.

He doesn't let those events taint his belief in the goodness of Marshalltown.

"I know that's not our school. That's not our community," he said. "We are defined by our much, much larger actions. The vast majority ... [of] people love their town and want it to be better. And when we go through hard times, there are so many individuals that help us get through those difficult challenges."

It's the relationships Phomvisay says he will miss the most.

Those extend from business partnerships that have improved the school's infrastructure, to student collaboration with the community anti-violence initiative, Not in Our Town.

Within the school, strong working relationships created an "environment of care and trust," he said. He describes his colleagues as brothers and sisters.

But at the school's core are its students.

It's the stories of their struggles and successes that invigorate Phomvisay and his belief that education transforms lives.

He becomes emotional when he recounts the story of a young woman who dropped out of school.

"She's only been in America for seven years, could hardly speak or read or write the language [and] had a child in her junior year," Phomvisay said. She came "back to be English proficient and graduate from high school and now is reading to her child."

Through board meetings, data collection and site visits, Phomvisay says he worked with the community to pin Marshalltown High School to a prominent place on a map of educational excellence.

"We hit the ground running from day one," he said. "And we keep charging hard."

Still on Phomvisay's plate is bringing another vision to fruition, even after he leaves the city limits: A high school academy focused on science, mathematics, technology and fine arts.
Businesses and area universities would partner, and students across the region could attend. Iowa State University and University of Northern Iowa regents have given their blessing, he said.

There is one thing that is not on Phomvisay's agenda, however.

"There are so many big things going on in the community, and I want to help," he said.

Read this story at the Marshalltown Times-Republican.