Patchogue Mayor: Ambassador to the Southwest | Not in Our Town
Skip to main content

Patchogue Mayor: Ambassador to the Southwest 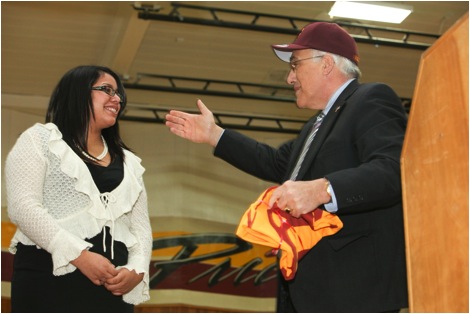 A Latina resident of Phoenix stepped up to the microphone, her voice cracking, nearly tearful.
“Why do they hate us?” she began. “That’s what my seven and eight-year-old niece and nephew—who have been in this country all their lives—ask me when they hear what people say about immigrants here in Arizona.”
The woman spoke to Patchogue, NY Mayor Paul Pontieri in a packed theater in February, following a screening of Not In Our Town: Light in the Darkness. Pontieri was sharing his experience during the aftermath of the hate crime killing of Marcelo Lucero and attacks on local immigrants in 2008. He spoke with compassion and conviction about the need to dampen dehumanizing rhetoric against immigrants, most especially because of its effects on children and young people. Pontieri was formerly a middle school assistant principal.
The Scottsdale event was the culminating activity of a tour featuring Mayor Pontieri and NIOT Filmmaker Patrice O’Neill, sponsored by the Fronteras network of public media stations and co-sponsored by the Anti-Defamation League (ADL). Over several weeks, Ponteiri spoke to student leaders at King/Chavez High School in San Diego, CA; Hilltop High School and Southwest High School in Chula Vista, CA; community members and college students at the University of California-San Diego; and Peer Links training in Phoenix, hosted by ADL.
In these cities that have been deeply divided over immigration, Pontieri presented a clear message for young people and community members: Make sure everyone is safe and included in your town before divisions turn to violence.
“I don't think anyone has the illusion that Patchogue has solved all the troubles with anti-immigrant intolerance, but it is quite moving to see people respond to Pontieri's simple and direct stories about why he decided to face the hate crime and try to bring people together,” O’Neill said.
“After all of the sessions, he was surrounded by people who wanted to thank him for his leadership. Like Joselo Lucero, Marcelo’s brother, and the many residents who stood together in a moment of tragedy, Mayor Pontieri surfaced his core values when called upon to take action.  From a small village in New York, a message both of warning and the need for inclusion is spreading to cities across the country.”
The story behind the tour. Fronteras is a public media partner on the Not In Our Town Inclusive Communities Campaign. Ashley Rodriguez, who works in diversity and engagement at KPBS in San Diego, talks about the tour:
For this project, seven public radio and TV stations collaborated to form a network across the Southwest from Las Vegas, NV to San Diego, CA to San Antonio, TX and in between. The Anti-Defamation League became a community partner. Together, we planned a weeklong set of events and fly out Mayor Paul Pontieri from the film Not In Our Town: Light in the Darkness.
I’ll admit that after working on this project for over six months and seeing the film at least 20 times, I thought of Mayor Pontieri as somewhat of a celebrity. Meeting him in front of the hotel at 7 on Monday morning, I couldn’t believe how much he looked just like the man I’d seen walking the snowy streets of Patchogue; and his voice, as warm and insightful as it is in the film.
Our first event was a 650 student assembly at a high school about five miles from the border. I’ve never seen one man be able to maintain a room of that many students with such calm. Later that night, Mayor Pontieri was our special guest at a screening at the University of California at San Diego. There, he answered questions from students and community members, and even ran into some old friends from his class at Patchogue (now Patchogue-Medford) Middle School.  In car rides to and from events, he and I chatted about village life versus city life, the passing of both our fathers, and of course, the Giants’ Super Bowl win.
In Phoenix, Mayor Pontieri engaged student leaders from around the area alongside Not In Our Town filmmaker, Patrice O’Neill, a dynamic duo for discussion on inclusion and intolerance. That evening, we screened the film again to an auditorium full of Scottsdale residents and community college students and faculty. The post-discussion was moving to say the least, bringing some teens and adults to tears.
Groups of attendees went up to Mayor Pontieri after the film to thank him for his ability to lead a community and for making a stand against hate; not just in his own village, but as an example for the country.  The morning we set off to the airport for his nine-hour trip back to Patchogue, and my one hour flight back to San Diego, I knew that Paul’s presence and wisdom made an impression on everyone he had met on that trip, including myself.
Related Links:
In:
san diego
Patchogue
Paul Pontieri
light in the darkness
Fronteras
phoenix
anti-defamation league

If anyone out there is interested in another perspective  on this terrible incident on Long Island -- consider reading -- LIE  -- my criticall- acclaimed debut young adult novel from St. Martin's Press.

inspired by real events (including most notably the Marcelo Lucero murder),  LIE is the fictional story of the aftermath of a brutal hate crime against two El Salvadoran brothers on Long Island, and the struggle of the two main characters 17 year old Skylar and Sean to tell the truth, or to lie.   More about LIE can be found at www.carolinebock.com.

Kudos to the Mayor from Patchogue talking about immigration in this way.

Truly, the author of LIE