The Paper Menorah: 20 Years Ago and Today | Not in Our Town
Skip to main content

The Paper Menorah: 20 Years Ago and Today

Every year at Hanukkah, Not In Our Town remembers Billings, MT, and the events that inspired our original film. 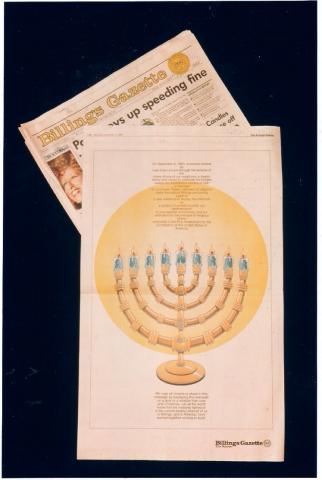 The menorah printed in the Billings Gazette
in 1993 and again in 2014.

It started with a brick flying through the bedroom window of a six-year-old Jewish boy over 20 years ago. Today it continues as a national movement to curb hate and intolerance, inspired by the courage of the residents of Billings.

The Billings Gazette printed a full-page menorah in the newspaper after the crime, and soon nearly 10,000 homes across the city proudly displayed these sacred candles in their front windows. Tammy Schnitzer, the mother of the boy whose room was attacked, remembers her son’s surprise about the suddenly high number of Jewish people in their town.

“No, they are all different religions,” she explained to him. “But they’re here to let you know that there are 10,000 arms wrapping themselves around you saying it’s safe.”

Not In Our Town leaders and advocates convened earlier this year in Billings for the National Gathering, arriving from all corners of the country for a weekend of idea sharing and action planning. Film subjects, community leaders, and activists were able to forge meaningful connections, and there was no better place to do so than the birthplace of Not In Our Town.

To commemorate the anniversary and the National Gathering, the Billings Gazette reprinted the same menorah, encouraging residents to continue the task of making Billings a welcoming place for all.

Over the past two decades, we have held thousands of screenings nationwide and reached millions through PBS broadcasts of our films. Our website, NIOT.org, attracts more than half-a-million unique visitors a year, and provides free films and resources to spark community and school-based action. And NIOT’s active network of over 200 schools and communities are putting our model to work in towns and cities coast to coast.

We are determined to continue this important work, and you can be a part of it by donating to stop hate. Your contributions help to produce even more inspiring films, create user-friendly online resources, and support a network of thousands of volunteers.