Submitted by Sue Fishkoff on November 4, 2009 - 12:51pm
NORMAN, OK: When Westboro Baptist Church announced it would picket Jewish institutions in Norman, Oklahoma, on Sept. 19, the eve of Rosh Hashanah, members of Hillel, the Jewish student organization at the University of Oklahoma, debated how to respond.
“Some of the students were upset, they said we needed to do something,” said Keren Ayalon, Hillel’s executive director. “I said that’s exactly what Westboro wants, a counter-protest.”
Westboro Baptist Church, the virulently homophobic and anti-Semitic “church”, which is not affiliated with any mainstream Baptist group and whose membership consists mainly of founder Fred Phelps and his family, travels the country staging protests against people and institutions it believes subvert God’s law. The group shifts its focus depending on what it feels will generate the most media coverage. Since April they have actively targeted the Jewish community, brandishing signs declaring “God hates Jews” along with similar signs denigrating homosexuals.
OU Hillel decided not to stage a counter-protest. But when Westboro Baptist arrived at the Hillel building that Friday afternoon, several hundred non-Jewish students showed up to demonstrate support for their Jewish peers, and the Hillel office was inundated with emails and phone calls of solidarity.
“There was a huge mass of support for us as Jews, it was really nice, and inspiring,” said OU junior Sam Scharff.
Encouraged by the college community response, Scharff along with fellow junior Misheala Giddings organized a Common Ground multi-cultural event. “This is not a response to Westboro because this has evolved into something more than that,” Scharff said. “We’ve come together to lift up the community.”
On Oct. 21, some 300 students representing 65 campus organizations came together in the student union for a Common Ground unity rally. Pan-American, African American and Muslim student groups were there, along with the Society of Native American Gentlemen fraternity, which put on a cultural demonstration. Two hundred students signed a large banner promoting diversity, which Giddings hopes will be displayed permanently on campus.
“It was a real celebration of our diverse community at OU,” said Scharff, who said he has received so much positive feedback about the rally that it might become an ongoing presence on campus. “It was much more meaningful than one protest against Westboro would have been,” he said. “I just want to get the word out that these kinds of things are possible.” 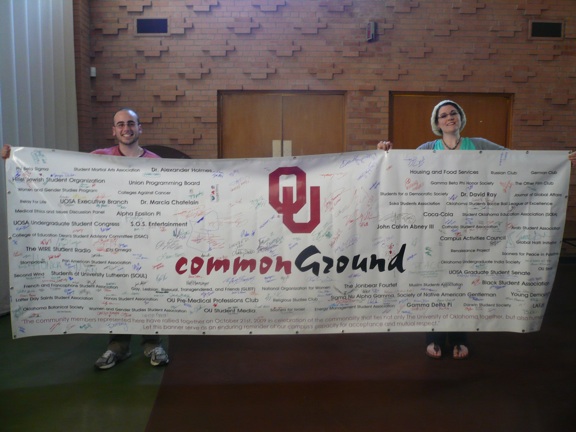 How is cultural diversity celebrated in your town? Share your story in our comments section.
In:
community response
anti-semitic
College
Not In Our Schools
Oklahma
Oklahoma University
Protest

Starting Common Ground was a great response to the hate group.  I'm sure your tuenout was much better than theirs.

This just sounds so

This just sounds so redicullas to me. I mean America is such a diverse country and according to the 1st amendment we all have the individual right to chose our religion and no one has the right to rebel against our religion.In this case we can see that the 1st amendment rights are being violated by rbelling against a jewish organihation. I dont get it why do peoeple always terget jewish people. Why dont we think abou the fact that jewish peoeple had faced a horrible time during hollocaust and till now they are being discriminated and mistreated. This is just so not right. Wjhy dont we just learn to respect all religion instead of rebelling aginst other religions? Why dont we just except divercity?