NIOT Billings: Obama on Marriage and Uniting Our Communities | Not in Our Town
Skip to main content

NIOT Billings: Obama on Marriage and Uniting Our Communities

When opponents of the LGBT community used President Obama's support of same-sex marriage as an opportunity to drive a wedge between African-American and LGBT communities, Eran Thompson spoke up. Thompson is an activist who serves his hometown of Billings, Montana as the chairperson of Not In Our Town Billings and serves on the board of the Montana Human Rights Network and Not In Our Town/The Working Group. In this piece, Thompson addresses the supporters of the Montana Human Rights Network. 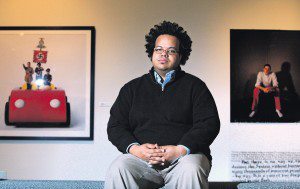 I am an activist for justice in my community, an African American, a father, an ally to the LGBT community, Chairperson of Not In Our Town Billings, and many other things. On Wednesday afternoon, President Obama made a statement that he personally believes that committed same-sex couples should be able to get married. President Obama is the first sitting president to make a statement of support for marriage equality, and I was so happy to hear him support fairness for my friends and neighbors. In Montana, you may have read the Great Falls Tribune story that talked about Obama's statement and local reactions to it. In that article, Jeff Laszloffy of the Montana Family Foundation stated that:

"The President has been forced into a political box in an election year by wealthy gay and lesbian supporters of his campaign. His endorsement of gay marriage will negatively impact the President's support from the African-American community that overwhelmingly opposes that position."

I've heard this kind of statement before, and you probably have too.  Laszloffy's comment suggests that the African-American community and the LGBT community are distinct and separate.  Of course this isn't true.  African-American people are LGBT people, they are allies of the LGBT community, and family members of LGBT people. The African-American community is not homogeneous. Our community is diverse just like the LGBT community. Laszloffy's statement is no accident.  Last month, a confidential internal strategy memo from the National Organization for Marriage (NOM) was leaked and picked up by the media.  It laid out its plan to fracture the base of progressive support.  It read, "The strategic goal of this project is to drive a wedge between gays and blacks - two key Democratic constituencies."

Statements like Laszloffy's are meant to create a false reality.  They are meant to divide our communities, and we simply cannot let it pass. The struggle for dignity, security, and justice is a shared struggle across constituencies.  As Dr. Martin Luther King Jr. famously stated in a 1965 speech at Oberlin College:

"All mankind is tied together; all life is interrelated, and we are all caught in an inescapable network of mutuality, tied in a single garment of destiny. Whatever affects one directly, affects all indirectly. For some strange reason I can never be what I ought to be until you are what you ought to be."

The fight for racial justice is all of our fight.  It's our fight, because the insidious mechanics of racism hurt our families, our neighbors and divide our communities.  We all have distinct lived experiences of both justice and oppression in Montana and in this country.  We need to talk about these experiences, talk about our differences, and struggle together for a just Montana.

We won't be divided by NOM or by the Montana Family Foundation.  We'll fight for a just Montana together.  Because I can't be what I ought to be until you can be what you ought to be.  Your fight is my fight, and we'll win justice together.