Not in Our Town Staff Meets with Groups in West Virginia 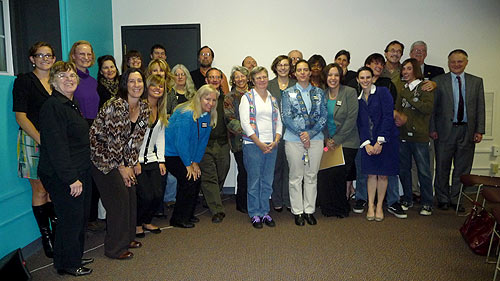 From November 3 to 6, Not in Our Town Executive Producer Patrice O'Neill and Civic Engagement Coordinator Jason Wallach toured West Virginia and led a series of open discussions about how to build safe, strong, hate-free communities throughout the state.

The aim of the Not in Our Town (NIOT) team in West Virginia was to learn about current actions in the state and to encourage active groups to share their knowledge and experience -- with each other and others around the country on our new site for the Not In Our Town movement. Check out a preview of the new site at: preview.NIOT.org
In Morgantown, NIOT reps met with a roomful of experienced activists and students. The energized room reverberated with the OneWVU campaign and what it has generated in the civic discourse across the West Virginia University (WVU) campus and in town. The name and effort even inspired the Charleston-based group, One Kanawha. The previous work of the WV Human Rights Commission provided a rich background to the current work.
Morgantown radio and TV previewed and covered the event:
WBOY TV News Award Winning Filmmaker Visits WVU

The event was attended by many experienced civic leaders including Assistant Attorney General Paul Sheridan and Clarksburg leader Jim Hunt, and activists like Tim Hairston and Barbara Howe from the West Virginia Human Right Commission. WVU's own John Hagan and Jim Nolan were also both in attendance. Between them, these courageous West Virginians carry a multitude of stories that informs the current moment in the fight against hate in West Virginia.

Here's a photo slideshow of our Charleston events:

In Charleston, we were honored to participate in two well-attended public events. First, the Charleston Area Alliance hosted a diverse gathering of civic, business, and faith based leaders who engaged in deep conversation about how to build racial unity in Charleston.

It was here that Twan and Lauren Reynolds shared their story.

They are an interracial couple (He is African-American, she is white.) who were falsely arrested after attending a football game in Montgomery by police officers working for the city of Montgomery. Twan was maced and severely beaten with a slapjack in the incident. Officer Matthew Leavitt pleaded guilty in Federal Court to violating Twan and Lauren's civil rights, and was sentenced to two years prison this past October 22. We¹ll share more of Twan and Lauren's courageous work against discrimination in an upcoming video segment on our YouTube channel.

Later that night, Not in Our Town Executive Producer Patrice O'Neill presented a series of short videos and showed a sneak preview of the new website, hosted by the Charleston YWCA. Fifty or so Charlestonians openly discussed the barriers to building a truly inclusive community and, not surprisingly, hope and optimism reigned. Teachers, librarians, lawyers and activists shared stories of their efforts and setbacks. The verdict? Charleston CAN be a place that offers people from all backgrounds a place at the table, safe from violence and prejudice, but there is much work to be done.

Also, NIOT staff also met with a committee from Logan County (see photos above), who continue their decades-long struggle against hate in communities in that rural county.

We salute them and their commitment! They are a true inspiration.