Imagine, if almost the entire population of San Francisco were stopped by the police and patted down, and 88 percent of the time these innocent people were released with no charges. An entire group of New York city residents, whose numbers are greater than the populations of many large cities, has had this experience.

In 2011, the NYPD stopped and questioned more than 685,000 New Yorkers. Eighty-seven percent were Black or Latino and 88 percent of those frisked were innocent and walked away with no charges, according to the NYCLU.

This week, the San Francisco Chronicle reports that San Francisco Mayor Ed Lee is considering implementing the controversial Stop and Frisk policy used by police in New York and Philadelphia. Mayor Lee says he wants to stop gun violence, which is a goal shared by many. But are massive police stops of innocent people the way to achieve this?

New Yorkers who had been stopped and frisked told the National Association for the Advancement of Colored People (NAACP) about their experience. Nate recalls a night he was stopped and frisked while he was running to meet his girlfriend. Giselle says she was frisked while she was riding the subway. To hear their stories and others, go to the NAACP YouTube Channel, #SilentMarchNYC.

To protest NYPD's Stop and Frisk policy and to raise awareness about the tragic consequences of racial profiling, tens of thousands gathered in New York City on Father's Day, June 17, for a Silent March.

"Today we are marching in silence to call for an end to racial profiling,” stated NAACP President and CEO Benjamin Todd Jealous. “All children, of every color, should feel protected by our police, not threatened, harassed or intimidated. Stop-and-frisk is a violation of NYPD policy, our constitution and the basic values of liberty and justice for all."

The recent murder of Trayvon Martin in Florida was also at the heart of this protest.

"We need to make sure that Trayvon Martin's death not be in vain," said Hector Figueroa, Secretary-Treasurer of SEIU Local 32BJ. "The lessons learned from this horrific incident require us to fight to ensure that no one, including our young people, across the city ever feel targeted because of the color of their skin."

Silent marches for civil rights are a tradition that dates back to 1917. The NAACP held the country’s first Silent March in New York in the aftermath of lynchings and race riots sweeping through the southern states. 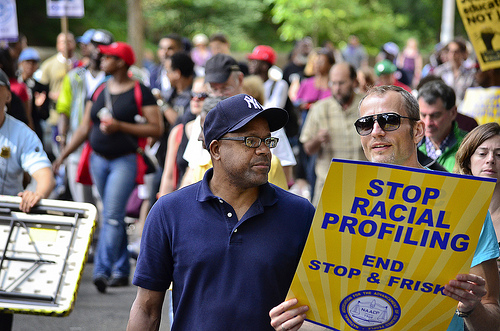 See more of the NAACP's photos from the Silent March here.