Lincoln, NE in Motion After Reported Hate Crime | Not in Our Town
Skip to main content

Editor's Note: Not In Our Town covers communities that respond to reported hate crimes and this story details how residents of Lincoln, NE and nearby cities stepped forward when they believed a neighbor had been harmed. Sadly, police now believe that the victim fabricated the story. Despite this unfortunate episode, it is important for neighbors to support victims of hate crimes, which occur every day. 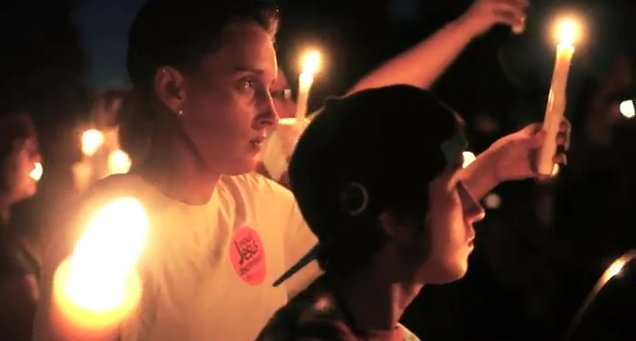 Prompted by a brutal attack against a lesbian in her own home, the Lincoln, NE community is organizing and speaking out in support of the victim and against hate-driven violence.

On July 22, Lincoln resident Linda Rappl heard a knock on her door around 4 a.m. She discovered her neighbor, a 33-year-old woman, naked and wrist-bound on her doorstep. The victim claimed three masked men had painted derogatory slurs in the victim’s home and carved slurs into her skin before they attempted to burn down her home. Rappl called 911.

“She is a wonderful, beautiful person," Rappl said. "I couldn't ask for a better neighbor."

In less than 12 hours, a vigil against violence and hate was organized and attended by more than 500 people at Lincoln’s Capitol. Three days later, the First Plymouth Congregational Church hosted its own vigil. So many arrived to show their support that the event had to be relocated to a larger sanctuary.

The following day, more than 1,000 gathered at Memorial Park in Omaha. Nearby towns Kearney and Grand Island also had their own vigils.

At the first vigil in Lincoln, a friend read a statement from the victim, who thanked those in attendance; her neighbor Rappl for summoning help; the police and fire department for their quick response; the paramedics, nurses and doctors who helped her; and the victim’s advocate from a local organization who sat with her. 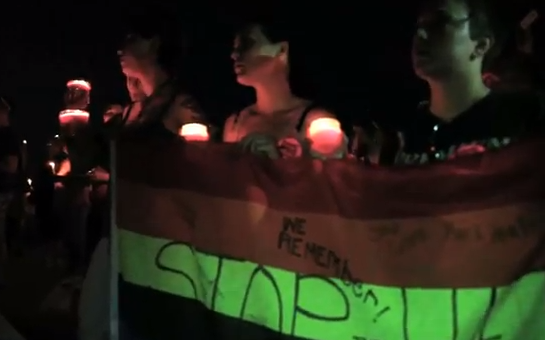 “Hate crimes are despicable and appalling to me and to all Lincoln residents,” Mayor Chris Beutler said in a statement. “Lincoln strives to be a community that embraces tolerance and equality. We stand united with our gay and lesbian citizens in denouncing violence directed at any group. The City of Lincoln and the Lincoln Police Department will do everything in our power to ensure that justice is done.”

With more than 2,000 members, the Vigil Against Violence Facebook group page has become a multi-faceted platform.

People post reactions and report on successes of the vigils and fundraisers specific to Lincoln’s hate crime, but they are also posting news articles about hate-driven violence happening nationwide. The page allows people to discuss hate and violence, as well as provides a space for them to offer public declaration of sympathy and solidarity.

Fundraising is a key response to this hate crime, as the victim is without an income or health insurance. Funds have been raised through actions like the NOH8 tattoo fundraiser hosted by Lincoln shop, Hartland Tattoo, where more than $600 has been raised for the victim’s recovery fund as of Aug. 5.

A food truck rally was held on Aug. 4, with the food trucks placing donation jars on their counters. A volunteer offered henna and “NOH8” temporary tattoos at the rally to raise additional funds. Lincoln’s LGBTQ pride group’s website details how people can get involved or donate to the Victim Recovery Fund.

On a special edition of radio show Lavender Hill, LGBTQ leaders in the Lincoln and Omaha communities acknowledged the shock of the attack while simultaneously communicated the reality of the daily potential for violence. President of OutLinc Tyler Richard suggested that community members seek out resources and community discussions being offered by OutLinc.

Images from video of Omaha vigil

She was arrested today and the police have labled it a hoax.  She is a criminal who has wasted thousands of dollars of taxpayer money.  She should not be viewed as a hero for bringing the community together in a vigil - she should be held accountable.  It is very good that a hate crime did not occur.  This brought bad publicity on Lincoln.  This is certainly not to say that hate does not exist here.  It exists here as it does everywhere.  I have many gay friends and am attending a transgender reception next month.  The victim is all of us.  I commend the LPD on their fine investigative work.  It is a shame that anyone who doubted her story was viewed as a bigot or hater.  I am not a bigot or a hater but my intuition could see that something did not add up.  I am glad that there are not 3 attacking homophobic maniacs on the loose in lincoln.  She needs help, but must pay for her actions.