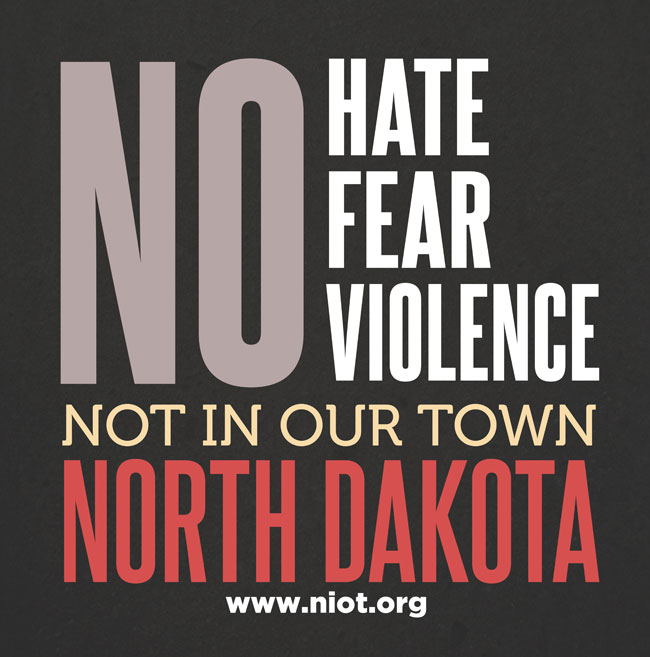 For those of you who are fans of "Wild, Wild Country" on Netflix, what's happening this month in Leith, North Dakota, will sound familiar. But in the case of Leith, it's not a religious group trying to take over a small town, it's white supremacists.

Some of you might remember what happened in Leith, a small town and farming community of a few dozen residents located just north of the Standing Rock Reservation in North Dakota. Back in 2013, white supremacist Craig Cobb moved into town and started buying up land. Cobb said he planned to turn over some of the 12 plots of land he had purchased to the National Socialist Movement and to former KKK leader Tom Metzger, vowing to make Leith a “white enclave.” As Cobb’s supporters began to move in and flags with swastikas were raised around the town, the citizens of Leith mobilized to stop them.

In September 2013, with the help of Not In Our Town, people from across the state went to Leith to stand with residents against hate swelling the ranks of the local townsfolk to a couple hundred united in their message, "Not In Our State."

Later that year, the situation escalated when Cobb and Kynan Dutton were arrested for threatening Leith residents with guns during an “armed patrol.” In January 2014, Cobb was jailed for terrorizing Leith residents.

Residents thought the white separatist movement to take over their town was finally over, but earlier this year, two candidates associated with Cobb — Michael Bencz and Deby Nelson — were elected to the city council with 10 and nine write-in votes respectively. Bencz denies that he supports Cobb's ideas, but he moved to town from Wisconsin shortly after Cobb announced his plan to turn the town into a white power enclave and he purchased property in Leith from Cobb.

Leith Mayor Ryan Schock isn't taking any chances. He's decided that he would rather dissolve his town’s government than risk a "chance that two write-ins to the town’s council could rekindle antagonism from the town’s brief, but vicious, brush with white supremacy." He told the Bismarck Tribune that he "hopes dissolving the town’s government will be the end of the Cobb legacy and of the division in Leith."

'Hopefully, it will go away. Nobody can take over the city government without a government,' he said.

Bencz declined to comment Wednesday, saying he didn’t yet know anything about the petition or upcoming vote for dissolution. He and Nelson were elected June 12 and had not yet been sworn into office.

Grant County Commissioner Miles Stoller said he was caught off guard when the Leith petition showed up on the county agenda.

'I thought it was all put to bed, but obviously not,' he said. 'It looks like we’re going to be the new mayor of Leith. It’s sad that it’s coming to this.'”

The Grant County Commission set a July 23 special election for the town to make a final decision.

Please show your support for Leith residents by sharing this article and the image above via social media. We'll pass your notes along to Mayor Schock and other Not In Our Town members in Leith, too. You can leave a comment on our Facebook page.