Immigration Group Screens Light in the Darkness in Silicon Valley

Submitted by Laura on September 27, 2011 - 9:09am
Jesse Castañeda, chair of the Silicon Valley Alliance for Immigration Reform (SVAIR) and human rights activist, has been campaigning for immigration reform in an effort to bridge the gap between the immigrant and mainstream populations. 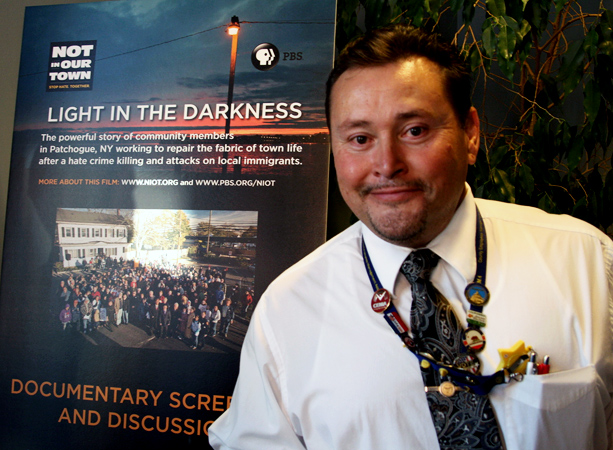 Jesse Castaneda, Chair of the Silicon Valley Alliance for Immigration
Reform, at the Light in the Darkness screening in San Francisco
Castañeda recently organized a screening of Not In Our Town: Light in the Darkness at the Dr. Martin Luther King Jr. Library in San Jose, Calif., using the film to facilitate a conversation about anti-immigrant sentiment in his community.
“My community is the community that Marcelo Lucero's family is part of—immigrants, mostly Latino immigrants, many undocumented. They do not have a voice in our society and live in the shadows,” said Castañeda.
“Many suffer harassment and discrimination and some have been involved in altercations against them.  Many are afraid to report incidents to the police because of [Secure Communities] and the fear of being deported.”
Founded in 2008, SVAIR is a coalition of diverse labor, religious, and non-profit organizations and human rights advocates. The organization’s activities include promoting immigration reform by empowering individuals and communities through education and advocacy, and by highlighting contributions of immigrants.
Castañeda said that he was happy with the turnout of his first screening, which was attended largely by San Jose State University students. He plans to host more screenings of the film in the coming months.
“As chair of SVAIR, one of the things that I do is visit other communities to discuss immigrants and immigration reform and it is hard to get anyone to meet in the middle and listen to the humanistic side of immigration,” he said. “Light in the Darkness helps temper down the hate and rhetoric and helps make the immigration conversation easier.”

Castañeda appeared on Spanish-language Radio Bilingue on Sept. 19, where he spoke about the Not In Our Town campaign. The show, which included one of the Light in the Darkness producers Ray Telles, is streaming and available for download.