The Hungary Diaries: Record Turnout at March of the Living | Not in Our Town
Skip to main content

The Hungary Diaries: Record Turnout at March of the Living

In April, Not In Our Town conducted seven workshops in Hungary, meeting with the local media, community members, police recruits, students and documentary filmmakers. The tour was sponsored by Central European University and the U.S. and Norwegian embassies. 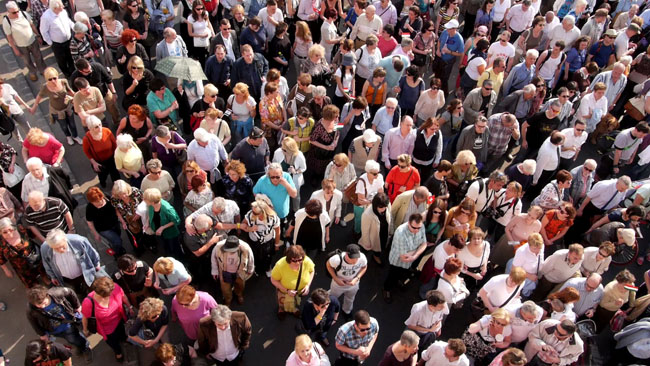 By Patrice O’Neill, Executive Producer of Not In Our Town
Last month, I traveled to Hungary to introduce  the Not In Our Town story and offer a model of community reconciliation and hate crime prevention. I wanted to learn from people on the ground about where the pressure points of hate were emerging, who was most affected, and to help open a discussion about what Hungarians could do together to create a more tolerant atmosphere.
In talking to people and reading press reports before I arrived, it was clear that anti-Roma bigotry is pervasive and that anti-Semitism is on the rise. Where would we find people who wanted to stand up and take action? The short answer is: Everywhere. In the following weeks, we will share some stories from the Hungarians we met on our journey.
“I dream in Hungarian.” 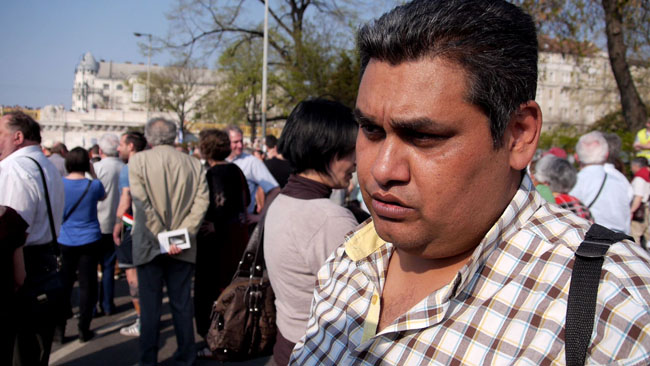 The day we arrived in Budapest, I interviewed Roma civil rights activist Jeno Sotet. He talked about how it feels to be treated as a second-class citizen in his own country. In this interview, he lays bare the economic and social disparities that make it nearly impossible for Roma people to move out of poverty, including segregated schools, widespread unemployment and job discrimination. Six Roma people were murdered in serial hate crime attacks by racist skinheads two years ago, but the trials of these men are still in process, and rarely covered in the media.
Jeno is a man who loves his country and yet many of his fellow citizens can only see him by his ethnic identity. “I am Hungarian,” Jeno says, “I dream in Hungarian.”
March of the Living: "We will surround the synagogue."
Jeno, like many fellow Hungarians, was deeply disturbed by a group of white supremacists threatening the Jewish community. The following week, on April 21, neo-Nazis planned a motorcycle rally at Budapest’s main synagogue on a day when people everywhere remember the victims and survivors of the Holocaust. The Neo-Nazi’s theme was “Let’s Kick Up the Gas.”
The rally was to take place on the same day as the March of the Living, commemorating the 600,000 Hungarian Jews lost in the Holocaust.  (Started in Auschwitz , the March of the Living refers to the 3-kilometer walk from Auschwitz to Birkenau, which thousands make each each as a silent tribute to Holocaust victims.)
“We will surround the synagogue,” Jeno told us. Dozens of Roma planned to encircle the synagogue there in support of the Jewish people.
An attack on one is an attack on all. That’s what we’ve learned from Not In Our Town  communities everywhere, and Jeno’s example provided a clear example of how this central idea was alive and well in Budapest. 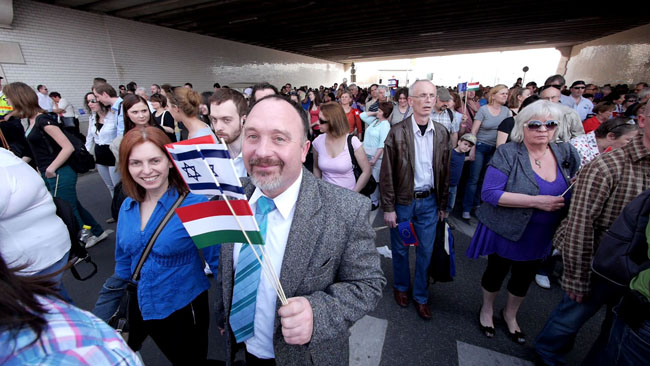 The Hungarian government canceled the permit for the the neo-Nazi rally at the synagogue.  But the remembrance of the Jewish people proceeded. Hungarians filled the streets for the 11th annual March of the Living.
Perhaps because of the clear threat, starkly presented by the neo-Nazi plans and an understanding of what is at stake, Jewish Hungarians and their supporters turned out this year in record numbers. Over 10,000 people rallied on the  Danube for the March of the Living, more than doubling the usual attendance for the annual event.
March of the Living Foundation chairman Gábor Gordon said the fact that more people attended this year’s march than ever is proof “there is trouble” and that increasing numbers of people are seeking ways to fight racism, according to the Budapest Times.
As our host, journalist and CEU instructor Ellen Hume says, the good people of Hungary are everywhere. The turnout for the March of the Living was inspiring and we share these photos with you today.
Stay tuned for more stories from Hungary.

In Budapest, a memorial sits on the Danube: Bronze shoes, signifying those who had been shot directly into the river as the fascist Arrow Cross party could not be bothered to bury the dead. Victims had to take their shoes off before their execution, since their shoes were deemed valuable. In other scenes, Roma activists join March of the Living, where 10,000 march along the Danube.

In:
anti-Semitism
Not In Our Town
Patrice O'Neill
hungary
Roma
March of the Living