Eugene, OR: Students at the University of Oregon  have been up in arms since the Pacifica Institute started holding meetings on their campus. 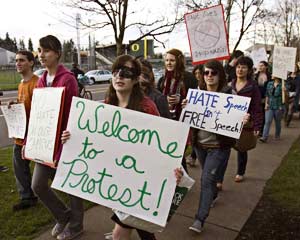 Pacifica Institute, deemed a white nationalist hate group by the Southern Poverty Law Center, insists it is merely providing a forum for speakers with diverse views. Recent speakers the group brought to the U of Oregon have called Martin Luther King, Jr. a "communist dupe," denied the Holocaust, and called the Russian Revolution a Jewish conspiracy. At a meeting last December, the Nazi salute was given.

Students have been protesting the group, both outside buildings where they appear and during meetings, demanding that they be banned from campus. University officials say they feel torn between the need to protect  free speech, and the anti-tolerance message Pacifica's speakers convey. One student who left the school over the group's presence told reporters: "I do not want to be on a campus where the president talks about diversity and inclusiveness but still allows a hate group on campus."

What are the limits of free speech? Should there be different standards for schools, universities and other educational institutions? Has your school or town had to decide whether or not to host Pacifica Institute, or any similar group with extremist, hateful views?

"I may not agree with what you say - but I will fight to the death your right to say it!" It is these Right Wing groups, that would love nothing more than to get limits set on free expression and other freedoms of choice that do not fit their world view - then they will endeavor to label any oposition to their cause as "hate speach'. I think it is a set up every time they use the rights they want to deny others to get this kind of reaction. Lets be careful not to come to resemble our enemies.