In the spirit of Not In Our School, a New Jersey elementary school shares this creative way to address bullying through music. Students stage a concert that involves the whole community.

The students, under the direction of their music teacher Erica Guillama, sang choral arrangements of songs such as Taylor Swift’s “Mean,” Aretha Franklin’s “Respect,” Lady Gaga’s (Glee arrangement) “Born This Way,” and “We Shall Overcome.” Select speakers delivered an anti-bullying message through spoken dialogue and powerful quotes that Guillama collected from influential authors, entertainers, and philosophers.

Having seen both the documentary film Bully and a 48 Hours special on bullying, Guillama was inspired to produce a concert to raise awareness. She was distraught when she learned that students as young as 11 years old were taking their own lives in response to bullying. She felt that it was imperative to teach her students about respect, self-acceptance, and strength and her creative approach had dazzling results! 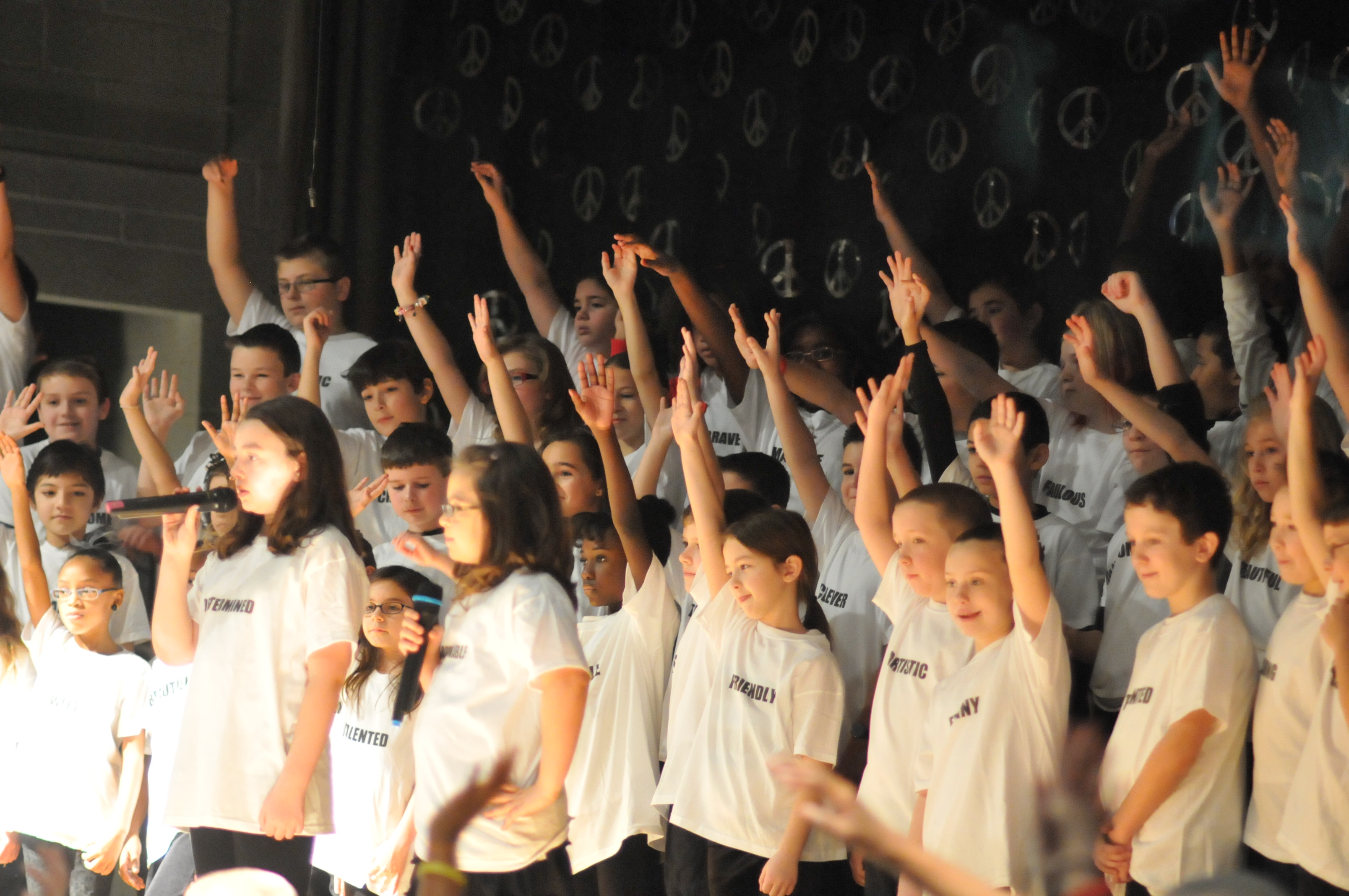 Speakers asked the choir and audience to raise their
hands if anyone has ever said anything mean or
disrespectful to them. Almost every hand in the crowd
(and on stage) went up.

Throughout the rehearsal/learning process, the students completed character-building exercises in addition to learning their music and speaking parts. Through this character education component, the children were able to develop a great sense of pride in themselves and their work. Each wore T-shirts that displayed positive character traits to the concert (Guillama saw a similar idea on the television show Glee and thought it was a wonderful concept).

In attendance was the entire K-5 population, family and community members, school district officials, and representatives from local Holocaust education groups. The message was heard loud and clear!

The children will be singing a shortened, more subdued concert as part of a Holocaust Remembrance Day ceremony at one of the district’s middle schools and other performance opportunities are being discussed.

Erica Guillama began her teaching career nearly a decade ago, with most of her years being spent as the general and choral music teacher of Loring Flemming Elementary School in Blackwood, NJ. She teaches approximately 700 kindergarten-fifth grade students and truly has a passion for music education. She is incredibly proud that her students are helping to make a change in our world.

In:
not in our school
new jersey
loring flemming elementary school

i was in the concert that year singing i believe the children r our future by whitney houstin i just want to give a shout out to miss guillma and the now turned sixth graders i miss u guys. i just hope that victims know that theyre not alone and that bullies get the message.no one has the right to make someone feel bad about themselves.dont be a bystander.anyway just wanted to comment and say thx for giving us 15 minutes of fame