Diversity and Innovation Fund Support for Not In Our Town

Not In Our Town: Light in the Darkness is not just a film, but the beginning of a conversation.

Here at The Working Group, we aim to produce films that serve a diverse audience with a shared goal: to make our communities safer and accepting of all. Not In Our Town: Light in the Darkness was not only broadcast nationally on PBS stations, but nearly 20 public media stations hosted relevant content and events in their respective markets. Nearly 30 national partners and allies—including the Department of Justice COPS, The National League of Cities, American Library Association, National Hispanic Media Coalition, and the Interfaith Alliance—shared the film with their constituencies. And at any hour of the day, our social media channels provided resources and space to connect around these important issues.

This community engagement success was made possible by  support from PBS through the Diversity and Innovation Fund at the Corporation for Public Broadcasting. The $20 million fund—supported by tax-payers dollars—launched in 2010 to support PBS' National Program Service.

"We feel that public media should reflect the new demographic in America," he said.

"This particular film fit the D&I fund like a glove," Tovares said. "We were looking to support projects that embrace the three D's and that were going to be successful. We're very proud to have supported this project." 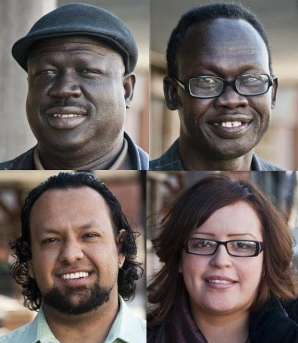 Diversity & Innovation fund support allowed Not In Our Town to partner with numerous public media stations.

The partnership offered Nashville Public Television an opportunity to work with their local community around issues that were important to all.

“What makes the work in Nashville such a powerful example of the Not In Our Town model is that it brings different sectors of society—schools, law enforcement, faith, Islamic, Latino/Hispanic, and local government—together in ways that link common experiences and issues, so that no one is excluded or left vulnerable to hate," NPT Community Outreach Manager Kathy Edson told Hispanic Nashville.

In addition to diversity and dialogue, Tovares said that the Diversity and Innovation Fund is interested in innovative ways to provide television content across the digital platforms that are becoming commonplace, especially among younger audiences, such as the web, mobile and iPads.

WDET concurs that this multi-platform approach has been a meaningful part of the partnership, “[The NIOT Initiative] got people to … reconnect with what makes working here special. It challenged us to use a cross media approach—video, web, in community—from inside to outside.”

The Diversity and Innovation Fund has supported The Longoria Affair, the upcoming children's show Daniel Tiger's Neighborhood and documentary Slavery by Another Name among many others.

Coming up: Interviews with public media partners about new community relationships that were built through the Not In Our Town Initiative.